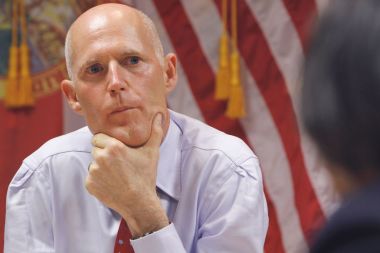 Florida Gov. Rick Scott signed a package of reform bills Wednesday night, bringing final approval for the first major overhaul of the state’s ethics laws in more than three decades. The two bills give significant new powers to the state’s ethics commission, extend a ban on lobbying for lawmakers after they leave office and rework the state’s campaign finance limits.

The new ethics legislation will address at least some of the weaknesses responsible for Florida’s overall grade of C- from the State Integrity Investigation, a state-by-state ranking of ethics and accountability released last year by the Center for Public Integrity, Global Integrity and Public Radio International. In the specific category of ethics enforcement, the Sunshine State had received an F.

The measures, which the legislature passed last week, had been top priorities for Senate President Don Gaetz and House Speaker Will Weatherford, both Republicans. Watchdog groups followed the bills’ passage closely and largely praised the ethics bill.

“There’s been a 36 year drought of meaningful ethics reform legislation going anywhere in Florida,” said Dan Krassner, executive director of Integrity Florida, a statewide watchdog group. “The fact that our state leaders prioritized ethics reform and dedicated time and resources to serious debate and policy improvements on the issues is historic.”

Some reform advocates and lawmakers criticized aspects of the bills, however, particularly the campaign finance provisions. Those provisions eliminate a type of committee—called committees of continuous existence— that candidates have used to raise unlimited funds before transferring the money elsewhere, obscuring the source of the cash. But the bill will allow another form of committee—so-called political committees—to raise unlimited funds instead. The only improvement, advocates say, is that the money will be spent by the same committee that raised it, making it easier to track who is paying for what. The measure will also require more frequent reporting from candidates.

But in exchange, the bill raises the limits on donations to candidates and leaves in place loose restrictions on campaign committees, allowing them to continue to raise and spend unlimited quantities of money and report their finances less frequently than candidates.

“They’ve kind of used a spigot to turn the gush of money to a new direction,” said Deirdre Macnab, president of the League of Women Voters Florida. Her group had urged Scott to veto the campaign finance bill. “At the end of the day, the Florida voter is no winner by any stretch.”

Candidates for statewide office will now be able to accept donations of up to $3,000 from individuals, with all other candidates able to accept up to $1,000. Previously, the limit for all candidates had been $500. Gov. Scott, who is up for reelection next year, had opposed raising the limits.

”No one has shown me a rational for raising these limits,” Scott told reporters after the legislature approved the bills last week. But when asked why he decided to sign the bill yesterday, Scott simply said that he’d listened to advice from across the state and determined the legislation was “in the best interests of the state.”

Proponents of the measure, including Krassner, have said that overall, the bill will improve campaign finance transparency.

The ethics bill, which passed both chambers of the legislature unanimously, reaches far and wide. It will prevent lawmakers from lobbying government for two years after leaving office. Previously, they were barred from lobbying the legislature but could petition the executive branch—an allowance the previous speaker of the house, Dean Cannon, is currently using. The measure gives additional powers to the ethics commission to collect unpaid fines and allows the body to initiate investigations based on referrals from law enforcement agencies or the governor’s office. Until now, the commission could investigate only after receiving a sworn complaint directly. It will also put into law a ban on voting on bills that could affect lawmakers’ finances.

But the measure contains a couple of provisions that watchdog groups say actually loosen oversight and transparency. Lawmakers who submit incomplete or inaccurate financial disclosures will now have 30 days to correct them before the ethics commission can issue a fine. “It’s what I would call a ‘get out of jail free’ card,” Macnab said.

The bill also allows legislators to put their investments in blind trusts. But Philip Claypool, who in 2011 retired as the executive director of the state’s ethics commission, said the provision fails to put in place standard safeguards that other states and the federal government use for such trusts. The result, he said, is that lawmakers will be able to drop investments such as real estate holdings in or out of the trusts in order to vote on a measure that may affect the investment, without having to disclose anything.

Despite the complaints, however, even the strongest critics of the reform package say the bill signed Wednesday will improve the laws on the books.

“These are some really good things,” Macnab said. “While it doesn’t go quite as far as we would have liked, we think it’s a good bill for Florida.”