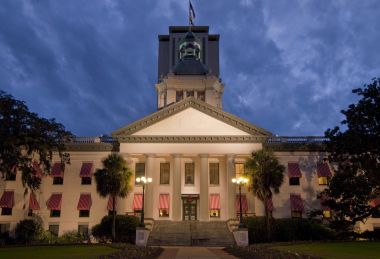 The Florida Capitol building in Tallahassee

The Republican-controlled Florida Senate unanimously passed a landmark ethics reform package on Tuesday, the first day of the legislative session, setting the stage for what could be the first major changes to the state’s ethics laws in decades.

The bills would strengthen provisions that prevent lawmakers from immediately becoming lobbyists, expand the powers of the state’s ethics commission and require that financial disclosure reports be posted online.

“Public office is a public trust,” Senate President Don Gaetz said in hailing the 40-0 vote. “This legislation means the Florida Senate is serious about ethics reform. Higher ethical standards is just one more difference between Florida senators and Washington senators.”

“I think it would be a step forward in some ways but several steps backward in others,” said Philip Claypool, a lawyer who served as executive director of the Florida Commission on Ethics until retiring in 2011. “The net effect I don’t think would be progress.”

While the legislation allows lawmakers to place investments in a blind trust in an effort to prevent conflicts of interest, for example, it leaves out several safeguards contained in similar laws in other states and at the federal level, Claypool said.

The bills would also allow lawmakers who have filed erroneous or incomplete financial disclosure reports to correct the forms before the ethics commission can investigate, in essence preventing the body from fining officials for their transgressions.

“Basically, they can get away with paying even less attention to the accuracy of a report,” Claypool said.

Gaetz spokeswoman Katie Betta disputed the characterization that the bills loosen existing law. She said the legislation would strengthen the ethics commission by allowing it to receive referrals from other state agencies.

Currently, the commission can initiate an investigation only after receiving a sworn complaint.

Both Gaetz and Republican House Speaker Will Weatherford, both new to their leadership posts, have said that passing ethics reform is a top priority. The state received an overall grade of C- from the State Integrity Investigation, a state-by-state ranking of ethics and accountability released last year by the Center for Public Integrity, Global Integrity and Public Radio International.

House and Senate leaders do not agree on all the details of the bills.

While the Senate bill restricts how lawmakers can spend money from a type of campaign fund that legislators now use to solicit unlimited donations, legislation in the House would eliminate the committees altogether.

The House bill would also raise direct campaign contribution limits from $500 to $10,000 per person, a figure that Gaetz has said is too high. Ryan Duffy, a Weatherford spokesman, said he expects the House to begin work soon and to adopt a measure similar to the Senate package.

Dan Krassner, executive director of the watchdog group Integrity Florida, called the new legislation, “a mixed bag.” The Senate rushed the package through committees in an effort to pass it on the first day of the session, he said, but he’s hopeful the House may correct some of the problems identified by Claypool.

“Now that the bill is through the Senate it’s time for the House to remove provisions that protect officials who want to break ethics laws,” he said, “and instead ensure the bill protects the public.”