The final two people stand in line to vote after a long wait at a polling station at Northeastern Middle School, Tuesday, Nov. 3, 2020, in Mount Wolf, Pa. (AP Photo/Julio Cortez) 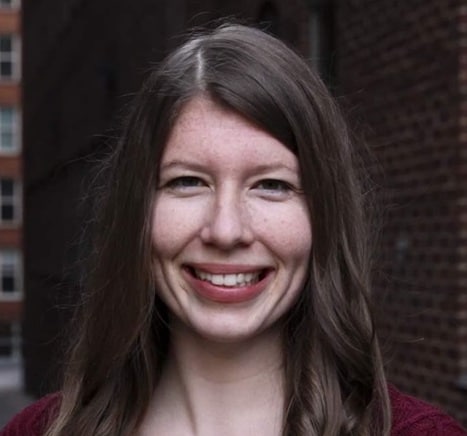 This story was published in partnership with Stateline.

POMEROY, Pa. — In Chester County, a hotly contested Philadelphia suburb, Republicans and Democrats agreed on one thing: the need to help voters find their polling place after the county sent a last-minute notification listing an incorrect location.

Barbara Skowood, the Republican committee person for the Valley South precinct, posted laminated signs and made dozens of phone calls. Sharon Yates, the precinct’s Democratic committee person, dropped off printed notices at nearly 190 houses. “I really think a lot of people pulled together,” Yates said. A county spokeswoman said 875 incorrect postcards were sent out, and the county attempted to remedy it by emailing voters and posting on social media.

Still, by midday, at least 20 people showed up at the wrong polling place, an elementary school, and had to be redirected to the right one, a fire station around a 4-mile drive away. Some stood in line for close to an hour before realizing the error.

But such problems were an exception. After months of stomach-churning anxiety about running a presidential election during the worst pandemic in a century, voting rights experts and local election officials across the country were relieved to see a relatively smooth Election Day. While there were sporadic reports of voting machine malfunctions, voter intimidation outside of polling places and hours-long lines at some precincts, the more than 101 million Americans who cast a ballot early — either in person or by mail — eased tension on an election system constrained by COVID-19 and other obstacles to voting.

Tuesday showed that when states and counties remove laws that make voting more difficult and expand access to mail-in and early voting, elections can run with fewer major issues, said Amber McReynolds, CEO of the National Vote at Home Institute, a nonprofit which advocates for greater mail-in voting access.

“Any time we’ve seen vote-by-mail increase in states, it relieves pressure off Election Day and elections go much smoother,” she said.

Some voters still preferred to cast ballots in person. In northeastern Lancaster County, Jared and Abbey Garman stood in a line of voters snaking through a small, asphalt lot at Bowmansville Fire Company. Volunteer firefighters helped direct traffic, pointing drivers to a nearby neighborhood while the lot was full. The couple — who voted for President Donald Trump — brought their two young daughters dressed in thick coats and hats.

“We didn’t have a reason not to be here,” said Jared Garman, and “wanted our votes to be counted.”

To be sure, there were several issues that plagued polling places throughout the country.

In at least some cases, Philadelphia’s polling place locator tool listed different voting sites than the state, according to a review by the Center for Public Integrity and Stateline. For example, an address assigned to the relatively nearby Morris School on Thompson Street, was listed on the city polling place locator as assigned to a different school — the Morrison School on N. 4th Street, more than 5 miles away. Philadelphia officials did not respond to questions about that specific error, but the city’s polling place locator tool was corrected Monday night, before Election Day, after inquiries from the Center for Public Integrity and Stateline.

The national 866-OUR-VOTE voter protection hotline — organized by dozens of civil rights organizations and staffed by 42,000 legal volunteers in law firms across the country — received more than 30,000 calls Tuesday through shortly before 7 p.m. from voters who reported issues. Calls primarily concerned voter registration and voter ID, voter intimidation and polling place access, with the largest numbers of calls concerning Pennsylvania, Texas, Florida, New York and Michigan, in that order.

From the early morning, it was clear that clusters of voters in states such as Arizona, Georgia, North Carolina, Pennsylvania and Ohio would have to wait in long lines or contend with delayed polling place openings caused by both technical issues with voting machines and confused or late poll workers. Polling places in Georgia, Nevada and North Carolina remained open for longer hours to account for the lost time from Tuesday morning’s delays. Two polling places in Apache County, Arizona, on the Navajo Nation, also extended hours after opening late.

Long lines popped up in states that did not allow unrestricted early and absentee voting, including Alabama and Mississippi, and in some states that did, such as Oklahoma. In Noble, Oklahoma, for example, voters waited more than five hours to cast their ballot. Misha Mohr, spokeswoman for the Oklahoma State Election Board, said that high turnout, mixed with social distancing and other safety measures, slowed down the check-in process and created long lines in some precincts in the state.

As many experts predicted, there were several attempts at spreading disinformation about the election. Around 10 million voters received robocalls that told them to “stay safe and stay home,” though it wasn’t entirely clear the calls were related to the election, while voters in Flint, Michigan, reported getting calls telling them to vote the day after Election Day to avoid long lines.

Voter intimidation also was a major issue of the day. Some voters called election protection hotlines because they felt intimidated by uniformed National Guard personnel assisting in Florida and Wisconsin polling places. Other voters in Florida reported feeling intimidated by men in civilian clothes identifying themselves as “deputies” who were questioning voters outside a Hillsborough County precinct, or by pickup trucks blocking an Orange County polling place entrance. In Charlotte, North Carolina, police arrested a man they said brought a gun to his polling place and refused to leave.

By the end of the day, though, many voting rights advocates expressed relief, pleased to see that these instances of voting challenges were not widespread. The election protection efforts and the historic levels of early voting created a successful day, said Kristen Clarke, president and executive director of the National Lawyers’ Committee for Civil Rights Under Law, a D.C.-based nonprofit.

“We have not seen major, systemic problems or attempts to obstruct voting for voters,” she said in a press call. “The problems we have seen for the most part have been isolated and sporadic.” Nonetheless, she said Tuesday evening that the voter intimidation instances were greater in number than in other recent elections and a cause for concern.

Most of these issues are normal for elections, said Trey Grayson, a former Republican secretary of state who served in Kentucky from 2004 until 2011. In many ways, these issues could have been more widespread and starker if the pandemic hit later than it did, Grayson said. State and local election officials had time to plan for fewer poll workers, reduced polling places, in-person safety measures and a monumental increase in the number of mail-in ballots.

“We got a little bit lucky with the timing of COVID and the pandemic,” he said in a press call. “It impacted primaries in several states. You can learn from the challenges about what worked and what didn’t.”

Voting rights advocates hope that this election will permanently broaden access to the ballot, leading to laws that expand early voting, make it easier to vote by mail and lift restrictions such as voter ID laws that have had a disproportionate impact on voters of color, students and the poor.

“While many of these voting access expansions were in response to COVID-19, they don’t have to go away and they should not,” said Karen Hobert Flynn, president of Common Cause, a Washington, D.C.-based voting rights organization with chapters in 30 states. “Americans in all 50 states should demand that every state adopt minimum standards of modernization in 2021 to be refined and ready for elections in 2022. We know these reforms can work.”

In the western part of Chester County, registered Democrat Rachel Waterhouse, 29, said she requested an absentee ballot in September but never received it. Fortunately, she said, everything went smoothly as she cast a vote for Joe Biden. “I was going to raise heck if I couldn’t vote.”

Her mother, Liz Waterhouse, a registered independent, joined her at a Valley Township elementary school polling place, even though she already voted with a mail-in ballot that arrived without a problem. “I don’t think I’ll vote [in-person] again,” she said.

Across the country, voters remove racist symbols and language from founding documents

The summer of unrest sharpens the nation’s attention to issues of racial justice.

Organizers seeking to turn out the Native American vote pressed for easier access to polling places and vote by mail.