Why Virginia ranked 47th of 50 states 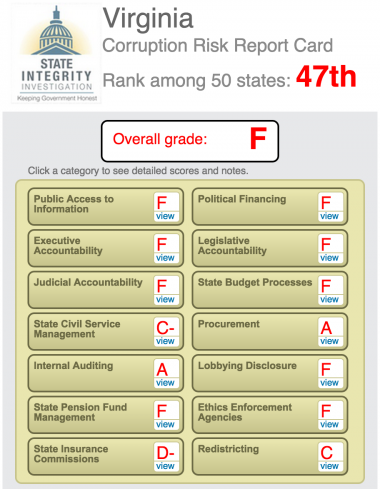 Virginia lawmakers introduce thousands of bills each year and spend hours debating the finer points of how to punish students for not reciting the Pledge of Allegiance, whether motorcyclists should wear helmets and who should get the death penalty.

But when it comes to making and enforcing rules for themselves, the legislators are shrinking violets.

The Old Dominion is one of nine states with no statewide ethics commission, one of four states with no campaign finance limits and one of only two states (South Carolina is the other) where the part-time legislators handpick the judges before whom many of them practice law.

With 8.1 million residents, Virginia is the 12th most populous state in the union. But its part-time lawmakers have one of the shortest meeting schedules in the country — 30 days in odd-numbered years and 60 days in even-numbered years. At that speed, lobbyists of necessity have been elevated from influence peddlers to trusted advisors and authors of laws, according to some veteran observers of the legislative process.

ProgressVA, a liberal advocacy group, reported in January 2012 for example that an industry-funded group wrote more than 50 bills introduced in the Virginia legislature in recent years. The American Legislative Exchange Council, which is funded by Exxon Mobil, Wal-Mart Stores, Koch Industries, and other wealthy corporations, writes model legislation of interest to its funders that sympathetic lawmakers have introduced in many states. In Virginia, dozens of lawmakers are members of the group or have attended its legislative conferences at a cost to the state of more than $200,000 since 2001. Its drafts provided the basis for Virginia’s legal challenge to the Obama administration’s health care reforms, a bill requiring voters to show identification at the polls, and a bill prohibiting the Environmental Protection Agency from regulating greenhouse gas emissions.

According to the ProgressVA report, Virginia Governor Bob McDonnell (R.) has supported the introduction of at least three pieces of ALEC-written legislation. House Speaker William Howell was ALEC’s national chairman in 2009 and remains on ALEC’s “national leadership team.”

Virginia has long prided itself on ethical government, but the state’s lax oversight rules, weak consumer representation protections, dwindling capitol press corps and coziness between political and economic elites, have all combined to undermine the validity of that self-image. Meanwhile, the few ethics and disclosure requirements that do exist tend to be flawed, limited or fraught with exemptions and qualifications, according to state ethics experts.

And so Virginia ranks a low 47th out of 50 states, with a grade of F and a numerical score of 55 percent from the State Integrity Investigation, a collaborative project of the Center for Public Integrity, Global Integrity, and Public Radio International. Virginia scored above the median on its civil service management and state purchasing, but scored near the bottom on public access to information and on its ethics enforcement mechanisms.

As an example of its shortcomings, lawmakers have exempted a key institution, the State Corporation Commission — which regulates businesses, utilities, financial institutions, insurance, railroads — from Virginia’s Freedom of Information Act. The state’s 31,000 prison inmates also are forbidden to make requests under the Act.

When the Associated Press tested the effectiveness of the law in 2006 by sending reporters to each county to ask for public records, only 43 percent had success. The rest were told, variously, that the records would not be released or would cost thousands of dollars in fees.

Virginia also has a General Assembly Conflict of Interests Act, but only one legislator has ever been prosecuted for violating it — in 1986.

Last summer, House Speaker Bill Howell was boastful about the state’s record when Phil Hamilton, a state delegate from Newport News and 21-year veteran of the General Assembly, was convicted of bribery and extortion in federal court. Hamilton was sentenced to nine years in prison for procuring funding for a teacher education center at Old Dominion University in exchange for a job as the center’s director.

“Neither ethical lapses nor public corruption are commonplace, let alone tolerated in Virginia,” Howell said, adding that the state has a longstanding “reputation for good government.”

Governor Bob McDonnell agreed. “Virginia has long been a state marked by honest, transparent and ethical governing by both parties. Today’s judgment is a reminder that no one is above the law.”

According to Virginia Division of Legislative Services lawyer Mary Spain, Hamilton was the only Virginia legislator in modern history to be charged with a federal crime in connection with his legislative duties. At Hamilton’s trial, prosecutors disclosed e-mails he sent to the university saying he needed at least $37,000 annually. “Of course,” Hamilton wrote in one message, “more is always appreciated.”

Three other lawmakers embroiled in earlier ethics investigations quit the legislature before their cases could be fully probed by one of two panels of legislators that are the state government’s sole entity policing the General Assembly’s conflict of interests law, passed in 1987.

John McGlennon, a professor of government at the College of William & Mary, says he knows what would have happened to Hamilton if federal authorities hadn’t indicted him. “The same thing that happened to everyone else: Nothing.”

“How they can take the case of the one guy who got caught and say it proves that no one does anything wrong is beyond me,” says McGlennon. ”Part of the reason we identify those states like Illinois and New Jersey as more corrupt is because they have more rules identifying corrupt behavior,” he says. “Here, instead of rules, we have this concept that suggests that people who hold political power …have a right to make a comfortable living even if part of that living is coming from their public office.”

No limits on campaign donations

While Virginia requires that all campaign donations over $100 be disclosed, it does not cap them. As a result, donors injected hundreds of thousands of dollars into last year’s state House and Senate races. By the time the dust cleared, 15 state senate campaigns had each spent more than $1 million, according to the Virginia Public Access Project (VPAP), a non-partisan watchdog of money in politics. The biggest contributions came from coal companies, organized labor and beverage distributors.

The state’s record of monitoring compliance with its disclosure requirements is not strong.

In 2004, for example, the State Board of Elections discovered through an internal audit that former Governor L. Douglas Wilder had not filed final disclosure reports for his 1989 gubernatorial election campaign and that about $169,000 had disappeared from his campaign account. Two Richmond Commonwealth’s Attorneys and one special prosecutor spent three years investigating the matter before Wilder’s son and one-time campaign treasurer, L. Douglas Wilder, Jr. pleaded guilty to two election law misdemeanors in 2007 – 18 years after his father’s election.

Wilder, Jr. was fined $1,000 and given a suspended one-year sentence. The fate of the money remains unknown.

Lobbyists in Virginia are required to register with the Secretary of the Commonwealth and to disclose the identities of their employers, how much money they make, how much time they spend lobbying and how much they spend to entertain lawmakers in excess of $50. But the forms are not audited, and the state gives lobbyists little substantive guidance when it comes to filling them out. As a result, there are marked differences in the quality and amount of information they supply.

In addition, experts point out, the definition of lobbying only covers direct contact with legislators or with the governor about the issue being lobbied. Contact with other lobbyists, with those who employ lobbyists, and with those at lobbying firms who conduct research, draft laws, or develop political strategies often goes unreported. Social events with legislators, other lobbyists and persons of influence can also go unreported.

“Changes to regulations [as opposed to laws]…are regularly the subject of lobbying efforts, but nobody reports those because the forms don’t ask about them,” said a lobbyist with decades of experience, who asked not to be named. “They just ask, ‘What did you lobby?’ So a lot of people just write, “Everything of interest to my client.’” For the same reason, he says, lobbyists do not use uniform ways of reporting what they are paid.

In a growing state with a part-time, short-staffed legislature and brief, increasingly frantic legislative sessions, observers say, lawmakers rely increasingly on lobbyists for information about the issues and for bill-writing services. And of course, they are representing the interests of private clients with enough wealth to hire them, not the public’s interest.

“Lobbyists play a big role here, and that’s a dilemma,” said Bob Holsworth, a political scientist and former dean at Virginia Commonwealth University who has served on many state advisory committees. “On one hand, lobbyists bring a lot of expertise. On the other hand, there are clearly some risks” because there are few regulations and laws governing their activities.

Even the smallest reforms come slowly in Virginia. Until recently, for example, legislators kept many of their key votes secret, choosing to either advance or indefinitely table bills in subcommittee meetings without keeping any public record of their positions. But in 2006, Democrats rebelled and tried to pass bills requiring the recording of subcommittee votes. They have yet to succeed. In 2009, however, after some Republicans finally broke ranks on the issue, the Speaker of the House relented, and now at least some subcommittee votes are recorded.

So far, says McGlennon, “It’s been very difficult to convince legislators of the value of transparency. Just convincing them of the importance of recording subcommittee votes has been difficult…. So don’t hold your breath” for further reform.

Correction: This story has been corrected to reflect that constitutional officers are subject to the Virginia Freedom of Information Act.