A view of the Finger Lakes region in New York. Shutterstock 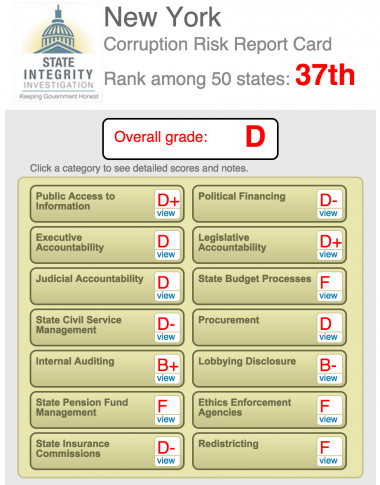 Albany is a dirty word.

When the capital is mentioned anywhere in New York state, there’s usually a guffawing rejoinder followed by “rats,” “bums,” or “thieves.”

The 19.5 million citizens of the Empire State can agree on one thing: Albany is defined by dysfunction and corruption. It won’t surprise anyone that New York fares poorly in the State Integrity Investigation conducted by the Center for Public Integrity, Global Integrity and Public Radio International. New York received a grade of D and a numerical score of 65, ranking it 37th among the states.

For fourteen years Republican Senate Majority Leader Joe Bruno very publically funneled millions of dollars into his district to build train stations, minor league baseball stadiums and parks that were all named after him. Bruno and his Democratic counterpart in the legislature, Speaker Sheldon Silver, could personally decide what legislation made it to the floor for a vote and punish legislators for speaking out. A budget process defined by backroom negotiations with the governor and the two majority leaders resulted in the popular phrase “three men in a room.”

Heralded as a political messiah in 2007, Gov. Eliot Spitzer quickly fell into dirty Albany battles and was felled by a prostitution scandal only 14 months after his inauguration on the Capitol’s marble steps. Spitzer’s successor, Gov. David Paterson, did little to restore faith in Albany. Paterson bickered with the legislature, and after helping Senate Democrats win the majority from the Republicans for the first time in more than four decades, was rewarded with a Senate coup d’etat. Two Democratic senators facing legal trouble—Hiram Monserrate for slashing his girlfriend across the face with a broken glass and the other, Pedro Espada, for alleged misuse of funds awarded to his non-profit Bronx-based health clinics — were wooed by Senate Republicans to put the GOP back in control for a while. Legal battles ensued and for months Albany sat paralyzed.

Gov. Andrew Cuomo rode into Albany as a reformer in 2011 but ran on economic issues as well as ethics. While New York City suffered during the 2008 stock market crash, much of rural upstate and Western New York have been suffering high unemployment rates and faltering economies for years. Cities like Buffalo and Rochester are part of the decaying rust belt, thanks to the disappearance of major manufacturers. Like Spitzer, Cuomo won by colossal margins; his win, like Spitzer’s, felt like an anointment. Cuomo had a mandate to clean up Albany corruption as well as to initiate austerity measures including major cuts to education and health care spending.

Cuomo’s tasks seemed gargantuan but in his first year he began to deliver—in some ways.

Cuomo steered both houses of the legislature to agree on ethics reform. The governor secured legislation to overhaul the Commission on Public Integrity so that it would oversee both the executive and the legislative branches, as well as lobbyists. Once up and running, the new Joint Commission on Public Ethics will be the first watchdog group in the state’s history to oversee the legislature without being completely in the hands of that same body. However, a group of legislators will get to decide how to punish any legislators charged by the panel.

“Today’s signing is a major step forward in restoring the people’s trust in government and changing the way Albany does business,” Cuomo said in a statement in August 2011. “This new ethics reform law brings an aggressive new approach to returning integrity to the halls of our Capitol. It provides for much-needed disclosure of outside income by lawmakers, creates an independent monitor to investigate corruption, and issues strong new rules for lobbyists.”

The new commission is made up of six appointments by the governor and eight by the legislature—three apiece for the majorities in each house and one apiece for the minorities. Commissioners cannot have served previously as legislators. As well, investigations can be blocked by a minority vote of commissioners.

From August 15 to December 12, 2011, New York went without a functioning ethics commission because the law that created JCOPE allowed Cuomo and legislators time to make their appointments. The previous ethics watchdog—the Commission on Public Integrity—ran with a skeleton crew, only able to accept complaints and lacking the staff to keep its website up to date with lobbyist filings.

Assembly Minority Leader Brian Kolb named David Renzi as his sole appointment to the new commission. Renzi once ran for state Senate and is the husband of a staffer of sitting state Sen. Patty Ritchie. Senate Minority Leader John Sampson’s sole appointment was Ravi Batra, who worked with ex-Brooklyn political boss and Assemblyman Clarence Norman, who was jailed for misuse of campaign funds. Batra was entangled in a judge bribery case in 2004 that involved Norman but was not charged. After Batra was nominated, the Albany Times Union reported that Sampson was actually of counsel to Batra’s firm and they both serve on the board of In Touch Wireless Concepts. Sampson did not disclose any of these facts when he made the appointment.

Cuomo has also packed the panel with familiar faces. He recently engineered his former Inspector General, Ellen Biben, to become its executive director. Another of Cuomo’s appointments was Mitra Hormozi, former chair of the CPI, who also worked under him during his time as Attorney General. When JCOPE finally met for the first time in late December, Barry Ginsberg, a Cuomo ally, was on the scene advising them—despite the fact that he had no official role or authority to be there.

The fact that Cuomo has stacked the commission with loyalists is particularly troubling to David Grandeau, former chair of the now defunct state lobbying commission. Grandeau sees history repeating itself. Grandeau was appointed chair of the lobbying commission in 2005. There were six employees at the time, and one computer. Over the years Grandeau built the agency up and was lauded for his efforts. The agency staff reached 40, and lobbying disclosures became accessible on the Internet in real time.

But in 2007, when Gov. Eliot Spitzer arrived in Albany, he decided to create a new ethics body that would combine Grandeau’s lobbying commission with other ethics oversight. The Commission on Public Integrity was born only weeks after Spitzer took office, and Grandeau was out of a job.

The Commission accepted disclosure forms from government officials, audited them and responded to complaints about ethical violations. And yet during its run, almost all the major political scandals and indictments came about because of federal investigations. Eventually the Commission ended up embroiled in scandal itself.

Spitzer used his image as a crusader against corruption to win the majority of appointments to the ethics commission. As a result many felt he controlled it. That issue grew during 2007 in what became known as Troopergate, when Spitzer directed state troopers to run surveillance on then-Senate Majority Leader Joe Bruno. Aides to Spitzer created bogus Bruno travel records and distributed them to press in an effort to discredit Bruno.

The CPI was tasked with investigating the incident. A report from the State Inspector General later found that members of the commission used a back channel to leak information about the investigation to a Spitzer aide. The CPI’s chair was forced to resign, and eventually CPI found that Spitzer’s press secretary had misused the State Police. It never found against Spitzer.

“This happens when any administration comes in and tries to put their people in the ethics agency,” says Grandeau.

Weak board of elections

The New York State Board of Elections is notoriously weak and is only able to levy $500 fines for missed filing deadlines. According to Bill Mahoney, research coordinator of the New York Public Interest Group, the State Board of Elections is “underfinanced, understaffed,” and susceptible to political influence. The board periodically sends a list of outstanding campaign finance violators to district attorneys. The DAs have a tendency not to pursue any action.

Perhaps the most striking example is that of Espada, the man who helped engineer the Senate coup. He was elected to his seat after facing charges that he misused his health care clinic and did not live in his district. Espada had already accumulated more than $61,000 in fines from the New York City Campaign Finance Board. During his term in the Senate, Espada racked up tens of thousands more dollars in fines from the State Board of Elections for failing to file disclosure reports.

At one point, Espada owed the board 23 outstanding finance reports.

Mahoney also points out that NYPIRG routinely sends the elections board a list of corporations that have donated above the campaign finance limits. Fines are rarely ever levied and months later the BOE will respond with a note saying that the companies have been given a warning. Mahoney notes that most of the companies have been “warned” multiple times. Elections board representatives declined comment.

New York’s contribution limits are considered relatively high; an individual can give $60,800 in a state-wide race (the BOE updates its limits each year). As well, there is a loophole that allows unlimited donations to the “housekeeping accounts” of political parties. Corporations are limited to donating $5,000 to a state campaign but routinely get around that by donating to these murky conduits. While funds donated to housekeeping accounts are not supposed to be used in campaigns, parties can bolster office seekers with the cash in a variety of ways, including laundering it through other organizations or opening district offices that can boost a candidate’s presence.

Cuomo made campaign finance reform the centerpiece of his 2012 State of the State Speech but so far he has not limited his own intake of cash. Cuomo has benefited from the creation of the Committee to Save New York, a group of real estate and business interests brought together to support his fiscal plans through public campaigns. The Committee to Save New York spent $12 million to support Cuomo’s budget policy in 2011—making it the fifth most expensive single-year lobbying campaign in the state’s history. Meanwhile, Cuomo raised nearly $12 million of his own cash in 2011 thanks to the support of major business leaders. In contrast, Spitzer only raised $7.2 million during his first year in office while enjoying similar popularity.

When long-time Senate Republican Majority Leader Joe Bruno finally exited politics, he wasn’t idle for long. Four days after leaving office in July 2008, he landed a gig as CEO of CMA Consulting Services—a firm that received half of its income from state contracts. In March 2009, CMA was awarded a $22 million contract to “renew” old software. Bruno had been indicted on federal corruption charges just two months before. Bruno was convicted of defrauding the public of honest services in December of 2009, but later, a federal appeals court threw out the conviction. Prosecutors filed new charges against Bruno in 2011 and 2012.

Carl Paladino, a wealthy Buffalo business magnate and Tea Party politician, shocked the Republican establishment by winning the Republican gubernatorial nomination in September, 2010. Paladino faced Cuomo in a heated yet uncompetitive election. Paladino ranted against “connected” Albany politicians and painted himself as an outsider. But that line of attack became awkward when his many state contracts were revealed along with the loads of campaign cash he had funneled to politicians from both parties. The Buffalo News found in 2010 that Paladino used 20 companies he controls to supplement the donations he gave as an individual. The News also reported at the time that Paladino had around 24 state contracts worth about $85 million. While the revelation was embarrassing to Paladino, the fact that he used companies to spread his donations around and “grease the wheels” was also uncomfortable for sitting Albany politicians.