Why Vermont ranked 26th of 50 states 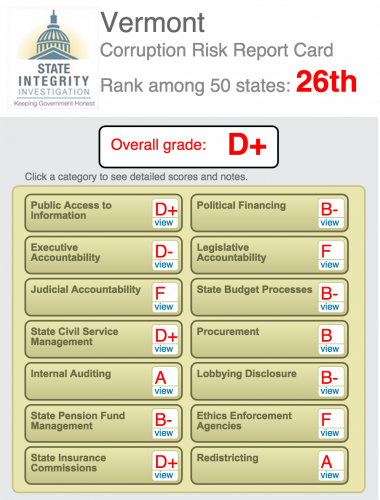 More so than almost any other state, Vermont conjures up vivid images in the public consciousness. Clean and green. Progressive and enlightened. The state’s reputation is almost as sweet as its maple syrup and mountain views. The Vermont “brand” is appealing because customers trust that what is “made in Vermont” is made with integrity, whether the product is Ben & Jerry’s ice cream or Cabot cheddar cheese.

No one can remember the last governor, legislator, or cabinet-level official charged with a crime. True, U.S. Rep. Matthew Lyon went to prison. But that was in 1798, for the crime of sedition, under the infamous Alien and Sedition Acts. His conviction was a badge of honor. Since then, Vermont officialdom has been remarkably scandal-free. Veteran observers say mediocrities and fools have been elected and appointed to statewide office. But very few scoundrels.

That doesn’t mean, though, that Vermont is a beacon of transparency. It’s more complicated than that. The state’s employment and procurement policies are open, its lobbying regulations rigorous and its redistricting process transparent. But on other fronts – ethics enforcement and disclosure among them – Vermonters prefer the bonds of personal trust and small-town familiarity to the formality of laws, forms and boards.

And so the Green Mountain State receives a letter grade of D+ and a numerical score of 69 ranking it 26th in the State Integrity Investigation conducted by the Center for Public Integrity, Global Integrity and Public Radio International.

Vermont has grown in recent years, but still numbers only about 626,000 people; the picturesque little capital city, Montpelier, boasts just over 7,800 residents.

As in many states with modest populations and independent streaks, Vermonters believe that informal social controls will provide much of the oversight that’s really needed. And that attitude colors pretty much everything.

Vermont, in the view of many Vermonters, may be weak on disclosure rules, but it is strong on trust. Or perhaps on nosiness, which can accomplish the same goal.

“This state is like a small town,” said Jake Brown, a senior official at the Vermont Natural Resources Council, the state’s foremost environmental organization. “Everybody knows everybody else and keeps an eye on everybody else.”

Should either a cabinet-level official or a foreman on a transportation department road crew all of a sudden pull up to the coffee shop in expensive wheels, or start taking fancy vacations, “everybody would know it,” Brown said. Indeed they would. This is not one of those states where the cabinet-level official moves to the Capital city. He or she still lives in the same neighborhood, with the same nosy neighbors.

Any citizen can go to the Legislature’s website and get the home phone number of any legislator. And such is the state’s political culture, that if that citizen calls a lawmaker at home, the legislator will take the call and discuss the constituent’s problems or suggestions. And those lawmakers don’t control much but themselves. There isn’t much cronyism, because there aren’t many spots to fill. Individual legislators hire nobody; they have no staffs (or, for that matter, offices). The Legislative leaders appoint the heads of the Joint Fiscal Office and the Legislative Council, who then fill their own staffs.

It’s on the more formal fronts where the picture is less rosy. For instance, where the state often falls short is in making official documents available to press and public. There is a Public Records Act guaranteeing the public access to most government documents. But there are also more than 260 exemptions to that law one of which often seems to apply whenever a news organization seeks information.

In effect, Vermont admits this. In the 2010 political campaign, the Democratic candidates for governor and Secretary of State both pledged to strengthen the Public Records Act. Both Peter Shumlin and Jim Condos were elected, and (not without some pressure from Vermont journalists) acted to fulfill those pledges.

One result was a new law which requires the state to pay the legal costs of anyone who wins a court case against a state agency that tried to withhold information. It’s too soon to judge how significant this change will be. But Tom Kearney, the managing editor of the Waterbury Record (and chair of the Vermont Press Association’s First Amendment Committee), said he thinks it could be a “major step forward.”

Kearney said this just after negotiations with state officials over making public documents about the choice of an architectural firm to plan restoration of the state office complex in Waterbury; the complex was flooded by Tropical Storm Irene. After a few days of haggling, Kearney said, the officials relented, and though he can’t be sure, he thinks perhaps it was that provision requiring the state to pick up the court costs if it lost a Public Record Law case that did the trick.

Nor is that the only recent hint that Vermont intends to let some more light shine into its government’s inner workings. A legislative committee (the Public Records Study Committee) is working on getting rid of some of those 260 Public Records Act exemptions. Secretary of State Condos does regular “transparency tours” talking to local officials about the new law, which affects them, too.

On the other hand, someone trying to figure out just how the state government is spending his or her tax dollars would likely have a hard time. It isn’t so much that the information isn’t available at all (though some of it is not, especially from the Judiciary), as that it’s hard to find for those who are not both ace data-searchers and familiar with the structure of state government.

So difficult was it for the average citizen to ferret out this information that in 2009, the liberal Public Assets Institute and the conservative Ethan Allen Institute embraced in a strange bed-fellowship to create “Vermont Transparency,” in an effort to make the process easier. The site provides useful summaries of state revenue and spending by source and function. “The theory is to have everything on one web site, so you can just get through all the bullet points,” said Bruce Shields, the president of the Ethan Allen Institute.

Even on the site, though, a curious citizen could not learn, for instance, how much the Department for Children and Families, a subdivision of the Agency of Human Services, spent on specific services at any one of its regional offices. Nor could someone glean that information from the Agency’s web site. Budget information, it says, is on the website of each of its subsidiary departments. But that’s just aggregate budget information – the department’s income from various funds and its total operating expenses. Nothing more specific. It is possible for those who have the time and the expertise to find that more precise information. The State is not exactly hiding it. But neither does it make it easy to uncover.

Even where Vermont has been at the forefront of political reform – campaign finance – information is not as accessible as it might be. Candidates, parties, and political action committees must file their campaign expenses and receipts. The Secretary of State’s Office gets that information into the public domain quickly, usually by the middle of the day after it is filed. But it is not data-searchable. Much of it is ‘locked’ inside a PDF format. So if someone wanted to find out, say, how much a candidate had received from a donor who had made more than one donation, he or she would have to wade through the candidate’s entire filing.

Put into the perspective of Vermont reality, this is not as big a problem as it may seem. A legislative candidate’s filing is unlikely to be longer than three or four pages, so wading through it is perhaps a ten-minute job. Even most candidates for statewide office receive and spend little money. Aside from an occasional U.S. Senate contest, only the gubernatorial races are expensive, with long filings, and those records are combed over by operatives of the opposing party.

“To some extent, the adversarial political system enhances transparency,” said Joshua Diamond, a Montpelier lawyer who has often represented the Democratic Party in campaign finance cases.

Still, the technology exists to put that information into data-searchable format. The trouble is, according to Secretary of State Condos, the software would cost about $1 million. With budget shortfalls seemingly chronic, if not eternal, the Legislature may continue to balk at spending that kind of money.

Worse perhaps, Vermont’s campaign finance laws require disclosure of the names and addresses of contributors, but not their employers or professions. An investigator wanting to know how much workers at the XYZ Corporation gave to Candidate A would have to have the company’s employee roster in hand to check against the campaign filings.

Overall, though, the math behind Vermont’s low grade in the State Integrity Investigation is really pretty simple. Vermont has no statewide ethics agency. And state officials are not required to file comprehensive asset disclosures.

One whole section of the State Integrity Investigation is devoted to the workings of a state ethics agency. Without one, Vermont gets a fat zero. And almost every category in the ranking asks questions about the accessibility and quality of the asset disclosure statements. Again, Vermont is shut out.

Having an ethics agency and requiring asset disclosures would no doubt enhance public confidence in the integrity of public officials. What is striking here, though, is how many Vermonters find neither proposal necessary — and that includes some who are champions of open and honest government. They think they already have open and honest government.

Vermont also loses points because its “legislators are allowed to hold private sector positions while in office.”

Here may exist a conflict – or at least a tension – between transparency and democracy. Like a number of other states, the Green Mountain State has a legislature in which lawmakers hold either private or public sector positions while in office. In colloquial terms, they all have a day job. Otherwise, they’d be broke. As legislators, they earn $600.78 a week while in session. That’s usually about 18 weeks, giving each member $10,814.04 for the session. For the most part, the per diem transportation and living allowances barely pay for the transportation and living expenses.

So lawmakers are farmers and teachers, software writers and social workers, game wardens and construction contractors, lawyers and doctors. Viewed from the transparency perspective, this means almost every member has a conflict of interest. The farmers vote on agriculture policy, the teachers on school spending, the doctors on health insurance, the game wardens on hunting regulations. Legislative rules require members to abstain “upon any question in which they are immediately or directly interested.” But that means only that a farmer would have to abstain on a bill that singled out his or her farm, the teacher on a measure specifically directed toward his or her school.

Partly as a result Vermont comes in 48th on legislative accountability. But no one’s losing any sleep over it. The voters here don’t consider theirs a legislature with conflicts of interest. They consider it a “citizens legislature” of approachable neighbors who understand day-to-day life here because they live it just as their constituents do. It’s safe to say that there is effectively zero support in Vermont for switching to a “professional” legislature. In this matter, Vermonters are more than content with the way things work in their “small town.”

But “small town” is not a synonym for “paradise.” Fictional though they were, “Winesburg, Ohio,” and “Peyton Place” told authentic stories of small town life, not all of them uplifting. When it comes to transparency and ethics in state government, the small town that is Vermont may not exactly have a dark side. But neither are all its pathways well lit.