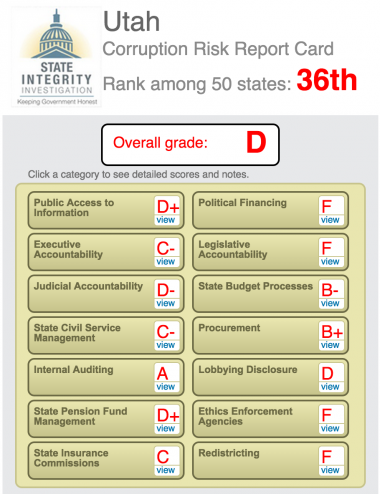 In 2008, when The Pew Center on the States graded Utah with an A− for government performance, state politicians had something to cheer about. The glowing mark helped mask the unsightly D− Utah garnered for campaign finance disclosure in a national survey called the Campaign Disclosure Project.

But now, according to the State Integrity Investigation, there are new reasons for concern. The Beehive State ranks 36th among the states, with a grade of D and a numerical score of 65 according to the integrity probe, a collaboration of the Center for Public Integrity, Global Integrity and Public Radio International.

That score, coupled with the mixed messages of the earlier study, raises the question: Is Utah’s boasting of being a “best managed state” in danger of erosion amid the explosion of money in politics? And, does this state of 2.8 million residents have the safeguards to prevent lasting problems?

“Just as we reveled in high marks from Pew for good governance and Forbes for businesses, we also must take [this] poor grade as a call for the state to look at model laws and possibilities for improvements,” said Kirk Jowers, chair of the Governor’s Commission on Strengthening Utah’s Democracy.

Utah government has no public records ombudsman and no independent, statewide ethics agency, although the 2012 legislature did pass a bill creating a new ethics board for local governments. The state has limited asset disclosure requirements for public officials, and no requirement for lobbyists to report their compensation.

“While the State of Utah has made some significant strides in the right direction, especially with regard to budgets and audits, there are areas where we can improve and we are committed to working on those areas,” said GOP Gov. Gary Herbert, in a statement released by his spokesperson.

Former Republican lawmaker David Irvine, an attorney with Utahns for Ethical Government, said the issue “goes beyond the symbolism of a letter grade. The purpose of ethics laws is to keep honest people honest, and to give voters confidence that their government is acting for the benefit of all of us.” Utah is tied for the very bottom in the State Integrity Investigation’s rankings on ethics enforcement.

Headlines over the past few years reflect the worry. “Lawmaker resigns on eve of ethics investigation.” “Ethics complaints filed following accusations of bribery on Capitol Hill.” “Utah ex-official alleges retribution behind layoff.” “Liquor boss forced out amid allegations of wrongdoing.” “Former UTA board member made ‘millions’ on land deal near Draper rail stop.”

Such stories inspired a citizens’ initiative for ethics reform and factored in legislative changes. Utah lawmakers tightened the standards for accepting gifts and for the personal use of campaign funds in the spring of 2010. In January 2010, Governor Herbert issued an executive order banning most gifts for state employees and tightening rules against former employees lobbying executive branch agencies.

With the citizen push for ethics gaining momentum, Utah lawmakers in 2010 created their own ethics panel. But the reform sparked questions about how robust the Independent Ethics Commission will be. The panel meets in private. And, critics note, if a complaint against a lawmaker becomes public, it is dismissed.

The commission’s former chair, Michael Wilkins, said the rules aim to provide a thorough initial screening of allegations before they become public. “I think the theory was it would prevent last minute complaints,” he said, particularly just prior to an election.

In late 2009, a group of political and community leaders issued a 25-page report for the Governor’s Commission on Strengthening Utah’s Democracy.” Among its recommendations: Requiring disclosure of employment data for campaign contributors, limiting “revolving door” lobbying, and creating an Elections & Lobbying Review Commission.

Yet Utah lawmakers have not acted on the most far-reaching reforms suggested.

“There remain important improvements that the legislature should undertake,” said commission chair Jowers.

A year after the commission’s report was issued, the debate over campaign contributions re-ignited during the 2010 governor’s race.

In 2010, the state quietly paid a $13 million settlement to one of the unsuccessful bidders for a record $1.7 billion Utah County road contract. News of the settlement came as Governor Herbert defended himself against reports his campaign accepted $82,500 in campaign contributions from members of the winning bid team.

Both the governor and state road builders denied any suggestion of a link between the contract and the contributions. “I can tell you these bids come through a very complicated process. I don’t know who wins them, who loses them,” Gov. Herbert said when the story broke. “I don’t always know who’s given money to the campaign.”

The State Integrity Investigation also identified some of Utah’s strengths, including muscular audit and budget functions. The state ranked 3rd in auditing and 16th in budgeting. The review uncovered few complaints about the state’s unelected civil servants, and state government generally received high marks for its web access and breadth of online documents. Through the state legislature’s website on Utah.gov, residents can read bills, follow votes and listen to streaming or archived audio of committee hearings and floor debate.

Utah’s government records law survived an attempt by lawmakers to weaken it via a bill passed during the 11th hour of the 2011 legislative session. That move prompted an outcry that led to the bill’s repeal in late March.

That, open government experts say, was a snippet of good news in a state struggling to create lasting safeguards.