Why Texas ranked 27th of 50 states 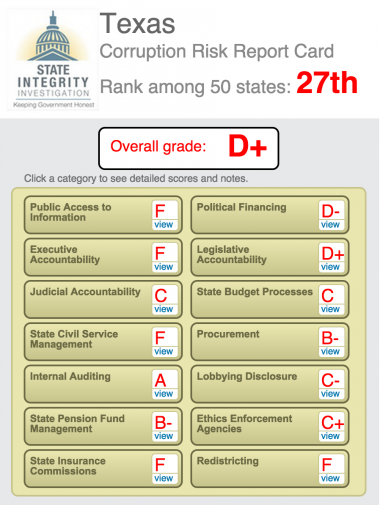 In Texas politics, money flows freely, lobbyists enjoy a powerful presence at the state capitol and governors are propelled into the national spotlight.

Citizens who want to keep a close eye on these activities do have tools at their disposal. The Texas Public Information Act is relatively strong, with some exceptions. Campaign finance reports can be obtained online. Certain lobbyist activities are revealed through state-required filings. Public access to the Texas Legislature is easier than it was only a few years ago.

So, the Lone Star State — which now boasts 25.7 million residents —gets generally high marks for making information available to the public. But it has a long way to go when it comes to holding state officials fully accountable, government watchdogs say. In keeping political agendas separate from official state business at the highest levels of government, they say, Texas also falls short.

“It is far worse in that regard than it’s ever been before,” said Tom “Smitty” Smith, director of Public Citizen of Texas and a veteran activist at the capitol.

Public officials sometimes find ways to delay before handing over public information. Financial disclosure reports contain significant loopholes. And, in perhaps the most pronounced example of free rein for Texas elected officials, campaign contributions to candidates and political committees are unlimited, except in judicial elections.

And so Texas receives a D+ and a score of 68 from the State Integrity Investigation, ranking it 27th among the 50 states. Texas’ worst rankings were in the categories of civil service and executive accountability.

Contributions for individual candidates can reach $100,000, $500,000 or $1 million from a single donor. Forty percent of all money flowing into Texas campaigns comes from donors giving $100,000 or more, so there is little incentive to cater to the little guys, McDonald said. He noted that from the time Gov. Rick Perry became the state’s chief executive in 2000 until 2011, when he decided to run in the Republican presidential primary, $51 million of the $102 million contributed to Perry’s state campaign account came from just 204 sources. “The cream is at the top,” McDonald said.

Corporate donations to candidates are banned, and, overall, there’s good compliance with that law. However, former U.S. House Majority Leader Tom DeLay was convicted of money- laundering and conspiracy after he was accused of funneling $190,000 in illegal corporate campaign contributions to state legislative candidates. DeLay was sentenced to three years in prison in early 2011, but has been allowed to remain free on bond pending an appeal.

When average Texans request asset disclosure forms for state officers — known as personal financial statements — filed with the Texas Ethics Commission, they may be left with unanswered questions, said Smith of Public Citizen. “They lack essential detail,” he said of the reports.

State elected and high-level appointed officials are only required to list the quantities of stocks they own in increments, and for very large ownership there is no maximum amount disclosed for the holding. Partnership investments don’t have to be revealed if the ownership is less than 50 percent. Attorneys or consultants who serve in public office are able to avoid listing clients of their firms, leaving undisclosed any “behind-the-scenes loyalty” a lawmaker or member of a regulatory board may have, Smith said.

The state’s revolving-door laws and policies apply to leaders and high-ranking employees of certain state agencies and to the state comptroller. The governor and legislators are not covered, and it’s not uncommon for lawmakers to show up at the Texas Capitol as lobbyists immediately after retiring or losing a re-election bid.

Yet advocates for public employees say revolving-door policies work for agency staffers — in some cases so well that former state employees cannot find other jobs in their fields for years.

In the case of some regulatory agencies, such as the Texas Department of Insurance, former officials can find ways around the law, said Alex Winslow, executive director of Texas Watch, a nonprofit consumer group that monitors the insurance industry and the Texas Supreme Court. For example, someone can go to work for an insurance company as a consultant and advise the firm on the operations of the state insurance agency, without actually representing that company in front of the agency as a lobbyist.

Lobby registration and spending reports in Texas tell some of what a lobbyist is doing and a range of how much he or she is earning. They don’t tell which legislation the person is targeting or the pervasiveness of day-to-day spending on the entertainment of lawmakers or state agency officials.

‘A pretty darn good library … not a good cop’

The Texas Ethics Commission is the umbrella state agency in charge of overseeing compliance with lobby reports, campaign finance laws, personal asset disclosures and ethics rules and laws in general.

The commission was created by a constitutional amendment that Texas voters approved in 1991. It operates under laws created by the Legislature, and therein lie some of its limitations. For instance, while it seems to have authority to conduct audits and investigations on its own, it is set up as an agency driven by complaints filed from the outside. A provision in state law requires six of eight board members to agree for the commission to open an investigation of its own — a high bar indeed.

“Everybody knows that the way it’s structured it can never function,” said Fred Lewis, an attorney and a longtime ethics watchdog in Texas. He contends the agency performs only surface investigations without issuing subpoenas or questioning witnesses in person under oath. “The truth is, there’s no will to do it. There’s no support to do it.”

Commission officials acknowledge that the agency typically pursues complaints from outsiders. Its main focus is ensuring that required documents are filed in a timely manner, and it gets good reviews for making records accessible. Its website is continually tweaked and updated. “We try to put [online] everything that’s available easily accessible to the public,” said its executive director, David Reisman, at a public presentation.

McDonald, of Texans for Public Justice, agreed that the commission is “a pretty darn good library.” However, he said, it’s “not a good cop.”

The commission does seem to be boosting fines for ethics violations. It imposed a record $100,000 fine in 2010 on Texas Court of Criminal Appeals Judge Sharon Keller for not disclosing interests in millions of dollars in properties and hundreds of thousands of dollars in other income. Keller’s appeal of that civil penalty is pending in court.

Attempts to withhold information from the press and public are an ongoing problem with some Texas officials. Keith Elkins, executive director of the Freedom of Information Foundation of Texas, explained that some public officials incorrectly contend they have 10 days to respond to Texas Public Information Act requests, when in fact they are supposed to provide that information in a “timely manner.” The 10-day cutoff is how long an agency has to request an attorney general’s opinion if there is an effort to withhold the information.

If the attorney general sides with the government agency and determines the information can be withheld, the appeal must go to state district court. Michael Schneider, newsroom and legal services director for the Texas Association of Broadcasters, noted that court battles are lengthy and expensive. While a media organization might be able to afford it, an average citizen cannot. He pointed out that major Texas newspapers have fought in court for years over the release of vouchers showing travel costs incurred by Department of Public Safety officers assigned to Perry’s security detail.

When George W. Bush was governor from 1995 to 2000, his office often delayed responding to information requests, said Bill Minutaglio, a former newspaper reporter and now a clinical professor at the School of Journalism at the University of Texas at Austin. Minutaglio is the author of First Son: George W. Bush and the Bush Family Dynasty, a book published shortly before Bush was elected president.

“It was just unbelievably difficult,” Minutaglio said of his attempts to pry information from Bush’s state administration. It was impossible to know if he was receiving all the information he’d requested, he said. “You get what you get.”

Despite Texas’ high-profile governors and Perry’s success in strengthening the office through his long tenure, the Texas governorship is a weak office constitutionally. Its main powers are appointments to state boards and commissions, vetoes of legislation, and the ability to call 30-day special legislative sessions.

The governor can also issue executive orders, and while Perry usually stuck to noncontroversial topics, his declaration in 2007 requiring sixth-grade girls to be vaccinated against the sexually transmitted disease HPV set public health policy and led to a backlash, especially among social conservatives. Lawmakers later undid the governor’s executive order.

The Texas governor is required to present a proposed budget to the Legislature, but lawmakers are not required to follow the recommendations. A longtime joke at the Texas Capitol is that the paper copy of the governor’s proposed budget could best be used as a doorstop because legislators ignore it.

While Texans take part in public hearings early in the budget process, the final version of the budget is written by the Legislature in frenetic negotiations without citizen input. Some meetings are held behind closed doors. It can take months or years to decipher the whole bill. Though the budget process is more transparent these days, there’s still “lots of mischief in there,” said Harvey Kronberg, editor of the online capital news source The Quorum Report.

Sherri Greenberg, a former Texas House member who went on to teach at the LBJ School of Public Affairs at the University of Texas, wrote a commentary in the Austin American-Statesman calling the 2012-13 Texas budget “the ultimate punt” by legislators. Greenberg wrote that state leaders were so intent on passing a budget in 2011 with no tax increases that they used “accounting tricks, deferrals and a less-than-transparent process.”

Texas redistricting in 2011 was fraught with transparency problems, too. Texans’ ability to provide input in the late stages of redistricting was limited as lawmakers gave the public a “bum’s rush” and passed a bill favored by the controlling Republican Party, Kronberg said. “It was a long way from a process that invited comment.” The redistricting maps were then subject to considerable legal wrangling that was only resolved in late February.