Why Tennessee ranked 8th of 50 states 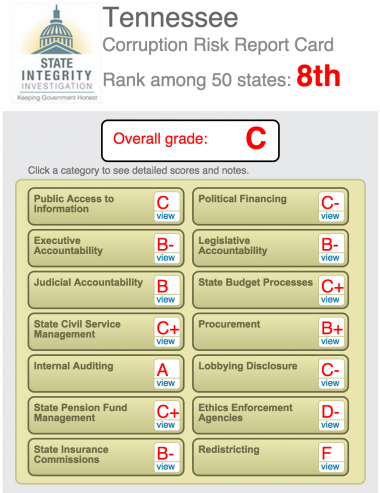 Embarrassed by a bribery scandal, Tennessee legislators passed a sweeping ethics reform bill in 2006 they portrayed as the showpiece of a new era of accountability.

But six years later, real questions persist over whether the heart of that bill, the creation of the Tennessee Ethics Commission, effectively polices public officials and lobbyists in this state of 6.4 million people.

Since its creation, the commission has been plagued by infighting, controversy and questions about how serious lawmakers really are about lasting reform. In six years, the panel has yet to find anyone guilty of violating an ethics law.

That mixed ethics message helps explain why Tennessee receives a grade of C and a numerical score of 76 from the State Integrity Investigation conducted by the Center for Public Integrity, Global Integrity and Public Radio International. The state did score well enough in some areas to rank 8th overall, but it drew criticism for allowing corporate political donations and redrawing political maps in secret.

“They did it because they had to do it. I think the public demanded some of that,” said Buck, who retired in 2008 after 36 years in the legislature. “I don’t think the leadership in the House at that point in time, and some on both sides off the aisle, wanted it.”

Yet it’s not clear how many complaints have been filed against lawmakers, lobbyists and other public officials, because that information is not available to the public.

The roots of reform

The Ethics Commission was born out of the FBI’s Tennessee Waltz sting, which led to the convictions of nine state and local officials and a lobbyist. The 2005 scandal brought down four sitting state lawmakers, including former Sen. John Ford of the politically powerful Ford family in Memphis.

Following the FBI arrests, the ethics bill emerged from a special session of the legislature called by then-Gov. Phil Bredesen.

“It’s a commonly known fact that, at the time, Bredesen forced the legislature to do something that they did not want to do,” said Bruce Androphy, the Ethics Commission’s first executive director. “That’s no big secret—by holding the special session, he sort of put the legislature’s feet to the fire to do something that they would not have done independently on their own.”

The commission voted to remove Androphy as executive director in 2009 after a rocky 2.5 years. At the time, some said lawmakers and lobbyists had no appetite for an assertive ethics commission. Androphy’s critics said the commission couldn’t get things done, and chided him for opposing a move to combine the commission into the Registry of Election Finance.

A year later, former Jackson, Tenn. Mayor Charles Farmer resigned from the commission out of frustration the panel was doing little to weed out corruption.

In his 2010 resignation letter, Farmer wrote that he was “increasingly doubtful that the Tennessee Ethics Commission can make a meaningful difference in whether the work of government is conducted ethically.” Farmer did not respond to a request for comment.

Then, from November 2010 to June 2011, the commission did not meet for seven months because new members had not been appointed.

Lawmakers have paid little attention to the commission. Instead, they have geared up for a fight with the state judiciary over the judges’ own ethics panel.

The Tennessee Court of the Judiciary, an ethics panel for judges, has come under fire by state lawmakers and some citizens who say it’s not disciplining judges who behave badly.

Lawmakers are upset the COJ dismisses more than 90 percent of complaints against judges. As with the Ethics Commission, the complaints against the judges are not public record. Some files become public only when a judge is formally charged by the panel.

“I question whether or not those complaints should have been dismissed,” said state Sen. Mae Beavers, one of the COJ’s biggest critics. “We have actually had judges who are committing felonies who are allowed to resign, and then they’re never prosecuted.”

Beavers contends the failure to discipline judges or prosecute them when they commit crimes makes them, essentially, unanswerable to the law.

Former state Attorney General Paul Summers, once a judge on the Tennessee Court of Criminal Appeals, said many complaints come from people angry that they lost their court case.

He says critics can’t assume judges are sweeping complaints under the rug. “That’s just not the truth,” Summers said. “Judges are in the business of making tough decisions about other people, other judges, other lawyers, other citizens every day of their lives. And just the fact that they’re having to make a tough decision about someone else who also is in their profession, that’s like water on a duck’s back. That’s just another day of work.”

The majority of the members on the panel are appointed by the Tennessee Supreme Court. Some members of the legislature, including Beavers, would like to change the law so that the speakers of the state House and Senate appoint the members.

Some judges say their independence is threatened by the Republican-led legislature.

Still, the COJ has a long history of dismissing complaints. In 2009, Tennessee Watchdog reported that of the 2,997 complaints lodged against judges from 1999 to 2009, less than 1 percent triggered disciplinary action.

It remains to be seen what state lawmakers will do with the COJ, or whether they will take up questions about their own ethics panel.

Bob Tuke, a Nashville lawyer and former chair of the Tennessee Democratic Party, said the law allows big donors to remain anonymous. He says the money will come out of the general coffers of a corporation, but the public will not know who is behind it.

On other fronts, Tennessee has a mixed record. The state ranked 40th in the openness of its redistricting process. Last year lawmakers posted information online so the public could participate in the process and invited public comment, hailing the steps as open government. Yet the actual redrawing of maps was conducted in secret.

Tennessee government did score well on other gauges of transparency:

And, a 2008 law says government officials must respond in writing within seven business days of public information requests – and created an Open Records Counsel to help citizens obtain information from sometimes reluctant agencies.