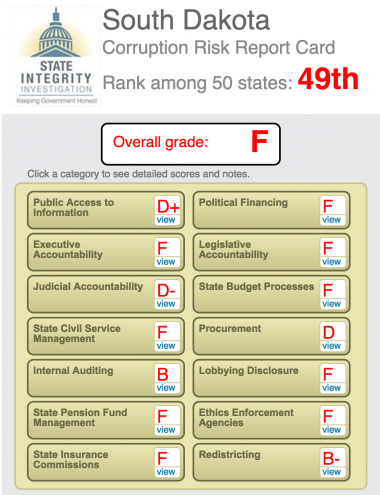 Mount Rushmore honors the founding principles of American democracy. But the state in which the iconic monument is located lacks some basic components of democratic governance.

South Dakota has neither comprehensive state ethics laws nor an ethics commission to oversee state officials and bureaucrats. And it comes up short in requiring public officials to disclose financial details.

These deficiencies place this state of 824,000 residents at the absolute bottom of the rankings in the State Integrity Investigation. South Dakota earns a grade of F and numeric score of 50, ranking it 49th among America’s 50 states.

The state has passed some reforms, and so more than a few local observers may not agree with the ranking. “South Dakota has made some good open government improvements in recent years, particularly in open records,” said David Bordewyk, general manager of the South Dakota Newspaper Association. “My personal assessment is that we probably rank somewhere in the middle of the pack when compared to other states on open government issues.”

Rightly or wrongly, though, the numbers say otherwise, and there are a number of reasons why. For one thing, South Dakota is one of only nine states that lack ethics commissions. Such bodies, according to the National Conference of State Legislatures, “represent the public’s interest and have a similar purpose: to ensure that groups under their jurisdiction follow state ethics laws.”

Johnson cited a list of more tailored state ethics provisions, from a ban on political activity while at work to prohibitions on bribery and corruption.

“Employees are fired with some frequency for violations of state law, policies, or procedures,” he wrote. “State employee ethics policies are enforced, as all state employee policies are, by supervisors, with assistance from legal and HR professionals. State laws for employees and officials are enforced by police, state attorneys, courts, the attorney general and state law enforcement. Elected official ethics policies in law (non-criminal) are enforced by the Legislature via their power to censure and remove from office. I think all of those people do a really good job — much better than many of the ‘ethics boards’ in other states.”

South Dakota also has few requirements for public officials to disclose their income and assets. Only judges must do so every year. Cabinet officials and others facing confirmation by the state senate, as well as candidates for statewide office, also must file disclosure forms, as dictated by state law.

Those forms provide only general information, however. Susan Smith, former publications manager for the South Dakota Newspaper Association and an advocate for open government, calls them “brief” and “vague.”

South Dakotans have long been able to see campaign finance reports online, though those reports are short on detail when it comes to disclosing how campaign funds have been spent. Expenditures are reported by category – advertising, events, etc. – rather than by listing who was paid and how much.

“There’s not a whole lot on there about expenditures. It’s very vague,” Smith said. “These reports give you an overall idea of what was spent and for what, but they do not give a detailed breakdown.

“‘Consulting?’ ‘Polling?’ What does that mean? It’s a blanket term,” said Smith, now the adviser to the Collegian student newspaper at South Dakota State University. “There’s no breakdown, just one number. And then there’s ‘administration,’ and none of it is itemized, and ‘miscellaneous’ with nothing but a dollar amount. ‘Miscellaneous’ could be a lot of things.”

“It doesn’t list the donors’ association with (the candidate) or whether the donors are state employees,” she said. “That would be interesting. But overall, it’s pretty good.”

And it’s about to get better: South Dakota is on the verge of making such records searchable online.

Other state records have been put online, too. During his first year in office, Secretary of State Jason Gant has added executive orders, executive proclamations, extradition orders, raffle requests and pistol permit request forms to his agency’s website.

State records became more accessible after a law passed in 2008 requiring a “presumption of openness” with regard to such records. In other words, if nothing says that a record is off limits, it should be made available to the public.

Still, Newspaper Association director Bordewyk said that state and local officials have become adept at citing the “broad” exceptions listed in the law. He said reporters often must be persistent when seeking public records and aren’t always able to get what they ask for.

Gov. Daugaard recently announced his “Better Government” initiative, a major component of which is a plan to make state government as open as possible. The governor said it will be “a cultural change for some.”

“It is part of my more general philosophy that, to the extent we are able, state government should provide as much information as it can, as quickly as it can to anyone who asks, whether they are members of the press or members of the public,” Daugaard wrote in a Sept. 16 op-ed. “I believe strongly that, unless there is a clear, compelling, and legal reason, government information should be open and easily accessible.”

By way of example, Daugaard has released invitation lists, kept secret by previous governors, to events such as golf tournaments and the annual governor’s pheasant hunt.

There’s still a law on the books, however, that allows all of the state’s lottery records to be kept secret. Smith said the law raises questions about the influence of South Dakota’s gambling industry. “To have a blanket law that prohibitive just raises suspicions about why they would need to be this guarded. It implies there’s something to hide,” she said. “To me, that does not inspire a very high level of public trust.”

South Dakota’s video lottery generates more than $100 million for South Dakota’s general fund each year. To have that much at stake without ongoing scrutiny could lead to trouble should a scandal erupt, Smith said.

“It’s a big revenue source for the state, and it would be good to have the sun shining on that whole situation,” she said.

Gambling industry lobbyist Larry Mann said the law is designed to protect proprietary information, and the names of those licensed to conduct business within the state’s video lottery industry are made public.
Campaign finance loophole

South Dakota law contains a significant loophole that allows one to make unlimited political donations by filling out a little paperwork. By giving to multiple political action committees or creating PACs, donors are able to funnel as much money as they want to a candidate, group of candidates or political party. Although campaign contributions from individuals to PACs are capped at $10,000 per year, contributions made from PACs to candidates or parties are not capped. To bypass the $10,000 limit and give, say, $100,000, one could simply create 10 PACs and donate $10,000 to each of them. Each PAC, in turn, could donate its $10,000 to the chosen candidate, for a total of $100,000 in contributions.

“If someone wanted to give [the South Dakota Democratic Party] $1 million, I could legally find a way to get all of that money with one day of paperwork,” said party Chairman Ben Nesselhuf. “I’d have to get creative with the names of the PACs. I think I could do it in two hours, actually.”

Secretary of State Gant stops short of calling this a loophole but agrees that contributors and politicians exploit the situation.

“Lots of people have done it. It’s common practice,” he said.

With the state’s move toward more open government, South Dakotans at least will be able to piece together the big campaign donations if they want to.

It might be more difficult to track which candidates convert campaign contributions to personal use – a practice not prohibited by state law.

South Dakota is benefiting from a reformed public procurement system, which limits or prevents sole-source contracting – depending on the type of contract — and encourages competitive bidding on both contracts and professional services.

After taking office in 2003, then- Gov. Mike Rounds put Paul Kinsman, the state’s commissioner of administration, in charge of reforming the process.

South Dakota now requires any sole-source contract to include an explanation for auditors. Most contracts and proposals are reviewed by committees, with multiple bidders, Kinsman said.

Pay-to-play is not part of state purchasing, he said.

“We’ve never had a situation where we’ve even had anyone question whether somebody had some kind of contract because they made a donation,” Kinsman said. “There’s a definite structure to the whole process. I don’t think pay to play can even come into it.”

South Dakota’s 2011 legislative redistricting process took strides towards being more transparent and inclusive, but the state’s Democrats still complained that Republicans used their political muscle to draw a map that favors the GOP.

Democrats said that some of their legislators will have to face each other, while most Republicans – who vastly outnumber the Democrats – will not have that problem.

“Despite a very high number of Republican incumbents, there are hardly any districts in which new lines will create any primary challenges for Republicans,” said Democratic party chairman Nesselhuf in a press release. Rep. Paul Dennert (D-Columbia) and Sen. Jason Frerichs (D-Wilmot) made similar comments.

Bill Thompson, a former Democratic legislator and co-founder of the South Dakota Citizens Redistricting Commission, said there has been “significant improvement” in the redistricting process. “The Legislature’s committee has been quite open,” he said. “Overall I’m pleased with the committee’s willingness to let us participate.”

But there’s a caveat, Thompson said. “Ultimately, the bottom line is the outcome. What does the map look like? Was the map drawn for the benefit of citizens or legislators? I’m afraid that’s a rhetorical question.”

While the parties worry about primary elections, the non-partisan staff at the Legislative Research Council has worked hard to reach out to key communities this year, said Jim Fry, the LRC’s director. On American Indian reservations, the LRC staff has used community liaisons to publicize public hearings in addition to the traditional press releases and public service announcements. Similar work has been done in Sioux Falls and Rapid City, the state’s two largest communities, Fry said.

The LRC’s website is perhaps the brightest spot when it comes to accessibility and transparency in South Dakota government.

The site, provides real-time streaming audio of all committee hearings and floor sessions. All agendas are posted in advance of committee and floor action, and the site allows users to track legislation as well as topics. Anyone interested in the business of the South Dakota Legislature can use the Internet to follow the action almost as closely as someone who never leaves the Capitol.

The only thing that could make the Legislature more open would be a ban on the closed caucus meetings held in the Capitol by both Republicans and Democrats each day of each legislative session. Many debates are held and decisions made within those meetings. It’s not uncommon for lawmakers to suspend open floor debate so they can gather behind closed doors to iron out an issue. This is particularly true for Republican legislators, as that party has held majorities and super-majorities in the Legislature in recent decades.

“Much work remains to be done if South Dakota is to become a much more robust state for openness and transparency,” the Newspaper Association’s Bordewyk said. “The good news is that there seems to be a greater awareness of open government issues among government officials and at least a willingness on their part to consider changes and improvements.”