A summer mansion on the Cliff Walk in Newport, Rhode Island. Shutterstock 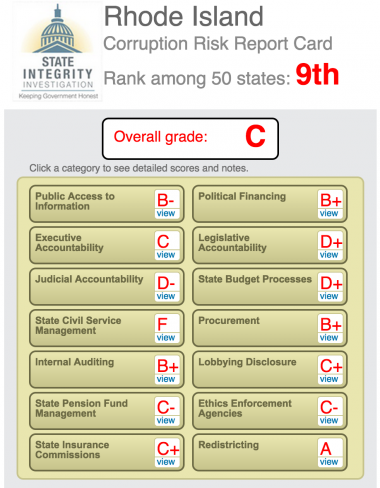 When he visited Rhode Island more than a century ago, the muckraker Lincoln Steffens was appalled.

“The political condition of Rhode Island is notorious, acknowledged and it is shameful,” Steffens wrote in McClure’s magazine in 1904. “Rhode Island is a state for sale, and cheap.”

Steffens was neither the first nor the last outsider to take note of the incestuous nature of the nation’s smallest state. Founded in 1636 by religious free-thinker Roger Williams as a haven of tolerance, Rhode Island’s conniving merchants and land speculators prompted the Puritans in neighboring Massachusetts and Connecticut to christen it “Rogues’ Island.” Cotton Mather called Rhode Island “the fag end of creation” and “the sewer of New England.”

In the 19th century, Rhode Island was a leader in the seafaring slave trade and the Industrial Revolution, amassing wealth and concentrating political power in the hands of a Yankee ruling class. The robber barons bought rural Republican votes, for as little as $5 apiece, while denying the vote to the landless urban immigrants who worked in the textile mills.

Steffens came to Rhode Island in 1904 to study the political machine that had produced U.S. Senator Nelson Aldrich, a former grocery clerk known as “the General Manager of the United States” for his cozy ties to big business and his opposition to Teddy Roosevelt’s trust-busting efforts. Aldrich’s Rhode Island machine was run by Boss Brayton, a half-blind Republican Party chief and Providence’s federal postmaster who once secured a $37,000 personal loan with postage stamps. Commenting on the tendency of some voters to sell their votes twice, a Brayton lieutenant groused to Steffens, “An honest voter is one who stays bought.”

Today, Rhode Island wrestles with its corrupt legacy as it struggles to revive a sagging post-industrial economy. Since the 1980s, Rhode Island has seen a governor and the mayor of Providence go to prison, two Supreme Court chief justices resign in disgrace, a House speaker lose power after a sex scandal involving an aide who later landed a state job, and two powerful legislators imprisoned in a federal influence-peddling probe involving the locally-based CVS drugstore chain. Rhode Island also endured a statewide credit-union collapse in the early 1990s that was precipitated by an insider network of corrupt pols, lax regulators, sleazy bankers and developers, and mobsters.

And yet, those scandals helped spur a watershed of reforms that vaulted Rhode Island into the forefront of other states: sunshine laws in the 1970s, creation of a strong Ethics Commission in the 1980s and merit-based selection of judges in the 1990s. And in November 2011, Rhode Island won national acclaim for overcoming special interests to overhaul a severely underfunded public pension system that was strangling the state’s finances. The law cuts benefits to members of politically powerful public-employee unions. Time magazine hailed Rhode Island as “The Little State That Could,” praising its politicians for coming together for the greater good at a time when so many other governments, state and national, are dysfunctional.

Given Rhode Island’s mixed record, it’s perhaps fitting that it garnered a grade of C and a score of 74 from the State Integrity Investigation, a collaborative project of the Center for Public Integrity, Global Integrity and Public Radio International. Rhode Island ranks 9th among the states.

Progress made, more to be done

Strides have been made, but more progress is needed to rid state government of its “I know a guy” mentality. Rhode Island’s political condition a century after Steffens’s visit is not shameful; rather, it’s a blend of transparent and opaque.

Consider these contradictory reflections of the Ocean State landscape early in the 21st Century:

What would Lincoln Steffens say if he were to visit Rhode Island today?

Rhode Island’s coziness, and its traditional Irish and Italian political machines, bred an insular political system in which personal relationships influence public policy. A politically connected lawyer once advised that to understand how things work in a city-state of just over 1 million people, you have to realize that many of the key decision makers grew up together –– “they sat in the same pew in church.” Those ties have loosened somewhat, says MacKay, but new ethnic fiefdoms, most notably Latino politicians in the capital city of Providence, are rising.

While there are fewer old-style bosses and more progressive leaders like Governor Lincoln Chafee and Treasurer Gina Raimondo, “It’s still a strong political insider culture,” says MacKay. “The mentality is, ‘You’re either with us or against us.”

Rhode Island’s cadre of lobbyists, many of them former legislators, trade off of those personal relationships. Visit the upscale Capital Grille in downtown Providence on a Friday night, and you’re likely to see a prominent lobbyist at the bar, bending elbows with a few lawmakers. It’s anybody’s guess, says MacKay, who’s picking up the tab at the “Capitalist” Grille –– the lobbyist, the lawmaker, or the taxpayer.

Lobbyists are heavy campaign contributors, in part an unintended consequence of the state’s ban on corporate campaign contributions. MacKay believes that companies can funnel money to politicians through their lobbyists. While lobbyists have to publicly disclose their fees, many are lawyers who can bill for other services that don’t have to be disclosed.

A lobbyist is limited by law to $1,000 a year in donations to an individual candidate. But one veteran lobbyist points out that if he and his law partners and their wives each give $1,000, and their firm at the end of the year gives them a bonus with a “wink,” “it’s all perfectly legit, as long as you pay your (income) taxes” on the money.

“Nobody’s stupid enough to match the bonus up directly to the amount of the campaign contribution,’’ says the lobbyist, who requested anonymity. “But if a firm is bringing in $200,000 to $300,000 a year in government relations fees and the partners share in that, and a politician is having a fundraiser, the partners are going to be helpful. It’s all legitimate.”

Rhode Island is an overwhelmingly Democratic state. And while its voters have had a tradition of electing independent-minded governors (the last Democratic governor left office in 1995), the General Assembly is the dominant force. The legislature is a part-time body, many of whose members are lawyers, insurance agents and union officials. Lawmakers traditionally meet from January to June.

Opening up the General Assembly

The General Assembly is more open than it once was. Committee hearings are posted, and key committee hearings, particularly in the Finance Committees, are televised, as are floor sessions. Copies of bills and House and Senate journals are available on line. The website is clunky and difficult to navigate; for instance, it’s hard to do key word searches to find key legislation. But early in the 2012 session, legislative leaders asked for money to upgrade an antiquated computer system and obtain the technology to televise and stream more committee hearings.

John Marion, executive director of Common Cause Rhode Island, says that the website helps citizens keep tabs on legislation, and that the proposed improvements will make it better. Marion points to his experience late in the 2011 session, when he discovered on a Friday an amended version of a bill that completely changed the proposed powers of a new commission to oversee the development of prime downtown Providence real estate.

Because of the legislature’s antiquated computer system, the amended bill wasn’t immediately posted on-line. Still, Marion was able to get a paper copy of the bill, get the word out to the press, and help win substantive changes before it was voted on the following Tuesday. With improvements to the website, Marion hopes, amended bills will be posted online automatically, to remove any potential for gamesmanship.

Another impediment to citizen input on legislation is the unpredictable nature of committee hearings. Committees usually meet after the House and Senate have concluded their daily sessions, on Tuesday, Wednesday and Thursday afternoons, so it’s hard to know what time hearings will start. Furthermore, there’s no predictable order in which bills will be heard, and many committees meet in small, overcrowded rooms.

But the biggest problem is the backroom nature of the legislative process. The televised hearings and public floor debates and greater Internet access are, in many ways, reminiscent of “a Moscow show trial in the 1930s,” says MacKay, of Rhode Island Public Radio. In the recent battle over legislative redistricting, Common Cause’s Marion notes, there were 23 public hearings –– then the leadership sat with the consultant behind closed doors and said “Screw this guy and screw that guy that we don’t like.”

The annual ritual of the state budget embodies the problem. In February, the governor introduces his proposed budget to great fanfare and extensive public scrutiny. Over the next three or four months, the budget will be vetted in televised House Finance Committee hearings. Then, late in June as the session nears its end, the leadership will huddle privately and make dramatic changes, often in consultation with Senate leaders.

The new budget is unveiled and the Finance Committee votes to approve it the same day; not even rank-and-file committee members see the new budget prior to the day they vote on it. And because there are only three Republicans on the 16-member committee, and the leadership exerts tight control, the budget always passes. Although there is a five-day “cooling off” period before the full House votes on the budget, the strong leadership control and overwhelming Democratic majority makes it hard to make any substantive changes on the House floor.

One way the leadership enforces discipline is by holding other legislation until the end of the session, to guarantee rank-and-file support for the budget and other bills important to the leaders. The result is a grand bazaar of backroom horse-trading, with judicial appointments thrown into the mix, and passage of dozens of last-minute bills late on the final night, with little or no scrutiny.

“Keeping amendments secret until you vote is a public-policy choice, not a technology choice,” says Marion. “Things have gotten better. But the end of the session, when they trade votes on bills for votes on the budget, and trade judicial appointments –– that knot still needs to be untied.”

What would Lincoln Steffens say?

“He’d see a state where reformers had their way for a generation, and made some definite progress, but where politics has done its best to evade some of those changes,” says Marion. “It’s like the metaphor I use in campaign finance. Reformers built a dam to keep the corrupting money out, but like water, it always finds its way back. We’ve put up a pretty strong bulwark against corruption and influence, yet like anyplace we’re not able to manage it completely.”