The Yaquina Bay Bridge at Newport, on the central Oregon coast. Shutterstock

Why Oregon ranked 14th of 50 states 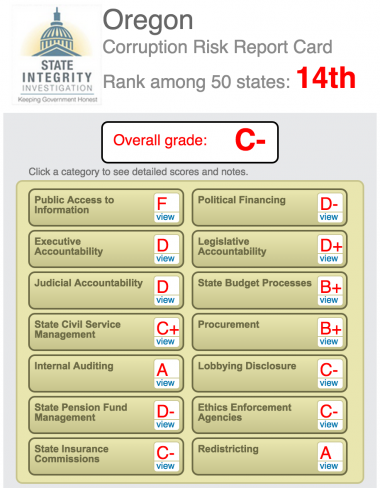 On the surface, Oregon can cite some of the country’s sturdiest ethics rules. The campaign funding database in this state of 3.9 million people is among the most transparent. All state elected officials must disclose their economic interests. Lobbyists must register and detail their spending quarterly.

Yet behind the broad strokes rules are fine print loopholes that, some say, expose weaknesses in the state’s ethics protections – and help explain how Oregon landed a middle of the pack C- and a numerical score of 73 from the State Integrity Investigation, ranking it 14th among the states. The project is a joint effort of the Center for Public Integrity, Global Integrity and Public Radio International.

An ethics reform package approved in 2007, for instance, essentially exempted thousands of workers from following gift limits and left open loopholes for events and business entertainment. Another loophole allows unlimited gifts to avoid oversight from the Oregon Government Ethics Commission.

While gift rules were tightened in 2007 and retooled in 2009, they have become so fine-tuned as to be easily avoided. Oregon legislators can still attend any entertainment event billed as “fact-finding” – and the rules exempting some travel for legislators could potentially permit lobbyists to carpool with legislators and take boat trips presumed to fall under the exemption. Meantime, prohibited gifts can be re-cast as campaign funds – which have no limits.

And, while the rules were made to include everyone from tiny town mayors to volunteer city planning commissioners, ethics reforms ultimately exempted thousands of state workers.

Again, the fine print made a difference. Clarifying language said the rules apply to gifts from anyone with a “legislative or administrative interest” – defined as an interest in the “decision or vote.” The change could potentially exempt thousands of workers in state government without broad decision-making authority or the power to set policy or decide contracts.

Charles Beggs, a member of the Oregon Government Ethics Commission, said the change drastically narrowed the state’s former gift law. He expects wrinkles to emerge as new language provokes ambiguity over when the law applies.

“That will play out in time as we get cases,” he said.

Ron Bersin, executive director of the ethics commission, contends that employees should not be interpreting the changes so broadly. He said all state workers have some decision-making authority and gift rules will apply within the realm in which they make decisions.

“To sit around and say you’re not making decisions, that just sounds convenient to me,” he said. “They are going to be in for a rude awakening when one of their employees comes before the commission because my commission would sanction them for that behavior.”

He said training is a major charge for the ethics commission, and that he would begin clarifying rules with state department heads to avoid problems.

Jim Markee, a Salem lobbyist for 36 years, said Oregon’s ethics rules are extremely comprehensive in some sections but littered with gaps elsewhere. The rules detail the discrepancy between the market value and actual cost of a gift to a public official – while at the same time allowing potentially questionable behavior.

As a registered lobbyist, Markee must limit spending on any person in government to $50 a year. That limit means Markee can’t take a legislator, say, to the McNary Golf Club, where he is a member – but public play has a market value of $55. His son, also a lobbyist at Markee & Associates, can’t give Christmas gifts to the children of a long-time friend because the man’s father took a state job.

“It’s a huge loophole,” said Markee. “We are hitting and missing.”

There are other opportunities to avoid gift rules.

Business-related events, such as conventions, are exempt if the event is offered by another government agency, tribe or a nonprofit. Even registered lobbyists can pay for pricey meals, hotels and entertainment for state officials provided the event is deemed a “fact-finding” mission and sanctioned by another government official. Such sanctions are not tracked or even officially recorded.

Bersin said interpreting the rules can be difficult, but that reforms in 2007 and 2009 tightened the vagaries that previously existed. “I think that the more specific we are on what we want public officials to do, what we want them to accept, I think the better off we are,” he said. Public officials in doubt can always call the ethics commission for advice, he said.

Yet John DiLorenzo, a business lobbyist, lawyer and long-time opponent to gift limits, said the state’s ethics reform was just for show. “Most of these laws, in Oregon anyway… are not targeted at preventing instances of actual corruption,” he said. “They are targeted more at assuaging public fears about the appearance of corruption.”

Campaign donations are a back door

Since then, voters passed a second initiative limiting campaign finance and expenditures but failed to approve companion legislation amending the Constitution. The question of whether the law can be enacted without the constitutional change is before the Oregon Supreme Court.

“Basically Oregon has adopted a model that says since our campaign limits have been thrown out by the courts, what we’re going to concentrate on is transparency,” said Rep. Vicki Berger, R-Salem.

Chuck Bennett, a former state legislator who has been a lobbyist for 26 years, now as the director of governmental relations for the Confederation of Oregon School Administrators, said it’s typical for Oregon legislators to seek campaign donations in lieu of meals at meetings. While he’s restricted from picking up tabs in excess of $50, he said he’s often asked for campaign contributions.

“That $15 lunch is replaced by a multi-hundred-dollar check that can be used for anything,” he said. “Who has access to that legislator? It’s the guy who has the campaign check.”

Bennett said the scenario was caused by ethics reform. Formerly, he said, lobbyists would buy meals for officials and disclose the spending, so the public was at least aware of who was having lunch with whom. Since the ethics rules were reformed, Bennett said, they’ve changed the way money moves in Oregon.

“When you get into the hydraulics of money and politics, when you push one place, it will pop out somewhere else that you never thought of,” he said. “I’ve been on both sides of this thing. This is as unhealthy an environment as we’ve ever had.”

Added Dan Meek, a Portland attorney representing plaintiffs in the campaign finance suit: “The gift limits are effective only against the small fry who do not know about the huge loophole – unlimited campaign contributions.”

A local theater group, for example, can’t offer free show tickets to a legislator if they retail for more than $50. But elected officials and candidates can spend unlimited sums from campaign funds, much of it put there by large donors.

The lack of campaign finance rules in Oregon has helped push the state toward big-money elections. More than $12.4 million was raised in state legislative races in 1998. Ten years later, the tab reached $20.3 million.

Janice Thompson, executive director of Common Cause Oregon, said the lack of limits on campaign contributions of all kinds – corporate, individual and by committee – produce unfortunate effects.

A 2009 study found 83 percent of the money in legislative elections through 2006 (the latest year available) came from corporations, political action committees and unions, wiping out influence by individual donors. Pass-through donations are also allowed, distorting the source of contributions as they travel from one committee and candidate to the next.

The ease of moving money throughout the Oregon political system is indicative of what some consider a larger issue: campaign money is not just for campaigns anymore. Oregon law has blurred the rules clarifying to whom the money belongs.

The state allows legislators to fund job-related expenses from campaign funds, allowing them to buy suits, cars, office space and other items. State Rep. Mike Schaufler, D-Happy Valley, rents a room in his own house using campaign funds, calling it a district office, according to reports by Willamette Week.

Schaufler said, however, that the $400 he pays himself for the office in his home saves contributors handsomely when compared with rental costs in the commercial market.

“Not only is it reasonable, it’s perfectly legal, ethical, and it’s appropriate and it’s necessary,” he said.

He is paid $1,800 a month to be a legislator, plus health care and a $123 per diem in session. To do the job correctly, he said, campaign contributions must be used for expenses like fuel, oil changes, Internet, phone and office rent. He said those who contribute to his campaign have not complained about how he uses the money or expected political favors in return.

“If you want to make me spend my own money to do this job, then you are going to have to triple my pay,” he said. Pressuring legislators to avoid spending contributions on expenses, he said, makes it “so that only rich people can do this job.” He added it’s unnecessary to limit spending in a state where every contribution is tracked to the penny.

Hans Linde, a former Oregon Supreme Court judge and a distinguished scholar in residence at Willamette University, said there are other instances in which campaign contributions may be spent in ways that were not intended. Candidates frequently raise money for their own campaign, for example – then give it to party members in contested elections to help secure a party majority.

“This doing it out of campaign funds is like skulking around corners,” Linde said, “and of course it makes you more dependent on people whose job it is to look after a client’s interest in the ongoing political process.”

Berger, the state representative, finds the ongoing pooling of funds into contested races problematic, saying it can win elections for candidates who otherwise have no district support.

“Parties on both sides of the aisle get together and decide what it’s going to take to win. They find a candidate that can win, and then they give them money,” said Berger. “And that enables somebody who may have no ability to raise any money in their own district to raise hundreds of thousands of dollars, because it’s been pooled.”

Berger said state party leadership asks for and expects its legislators to tithe to the pool, sometimes issuing directives to raise $10,000 in six months or a year to fund tight races. Berger said there are times when she resists. “Other times, I’ve gone the other way and said, ‘Okay, what’s the minimum?’ ”

Berger, who served on the committee that drafted ethics reform in 2007, said efforts to limit campaign pass-throughs would be futile in a state where courts view campaign financing as free speech. She knows few individual donors realize the money she raises doesn’t always stay in her fund.

“I can guarantee you those $50 donors don’t know I’m giving to any other PAC. The big bucks lobbyists? Of course they know.”