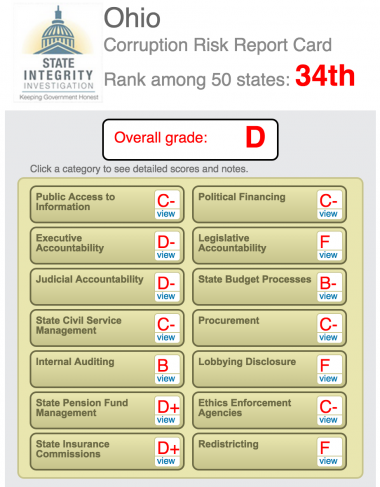 But that’s a bit tongue-in-cheek, as the list includes the likes of William Howard Taft, Warren G. Harding and others who rarely, if ever, make any historian’s list of Top 10 presidents.

Still, it’s not so much the former presidents as others who have tarnished the state’s reputation, political or otherwise. Even its hallowed Ohio State University Buckeyes football team lost its coach, who tried to cover up knowledge of player violations of NCAA rules.

Investigations of state departments regulating insurance and workers compensation investments garnered fewer headlines, but they resulted in jail time for state employees and lobbyists and federal prison time for others seeking favorable treatment or election outcomes. Other political scandals and voting irregularities could be added to the list.

As a result, Ohio ranks 34th with a grade of D and a score of 66 from the State Integrity Investigation, a collaborative project of the Center for Public Integrity, Global Integrity and Public Radio International. No state received an A.

Ohio‘s citizens – a population now estimated at 11.5 million — have no shortage of ethics laws to help protect them, including financial disclosure requirements and whistleblower safeguards. But Ohio has a history of state officials violating them – most notably the campaign finance law and a requirement to disclose meals, lodging or gifts worth more than $75.

And although reform of the system has been attempted, it hasn’t always played out as it was intended.

A history of pay-to-play

PIE was a leading insurer of doctors in nine states when it was seized by the state department and declared insolvent, leaving one in three Ohio doctors without malpractice insurance. PIE’s chief executive officer, Larry E. Rogers, had made about $1.5 million in illegal campaign contributions to top Ohio Republicans, including then-Gov. George Voinovich and former Attorney General Betty Montgomery, as well as U.S. Sen. Mike DeWine, the current Attorney General.

In exchange for Ohio regulators ignoring PIE’s deteriorating finances, Deputy Insurance Director David J. Randall was given cash and gifts, including airfare and use of Rogers’ vacation home in Hilton Head, S.C. Randall also took a computer and other bribes from former lobbyist Thomas Strussion, also fined and jailed in the scandal.

In 2005, then-Gov. Bob Taft, a Republican, was convicted and fined $4,000 for accepting gifts, including rounds of golf, from Statehouse lobbyists and a constituent trying to invest Bureau of Workers’ Compensation money. Thomas Noe, who invested state money in rare coins, later served federal prison time for bundling and concealing contributions to President Bush’s 2004 re-election campaign. The scandal was nicknamed “Coingate.”

Sometimes, the “pay-to-play” culture of the state capital in Columbus, Ohio, has followed top officials to Washington, D.C.

Two Ohio congressmen served prison time, while a third was labeled one of the nation’s least ethical members of Congress in 2011 for accepting free legal help from Turkish lawyers. U.S. Rep. Jean Schmidt, once cited for failing to disclose lobbying gifts that included tickets to a Cincinnati Bengals football game, even became a target for skits on Saturday Night Live.

The current administration of Gov. John Kasich – a former congressman, Fox News talk show host, and Lehman Brothers broker – has steered clear of any scandal. But some of his closest friends and campaign advisers became lobbyists, vying for lucrative state contacts.

Kasich was elected on a pledge of streamlining government and privatizing some state agencies and prisons. Before being sworn in as governor, Kasich squared off with news outlets seeking the names of his administration’s job applicants.

Kasich’s running mate, Lt. Gov. Mary Taylor, is former state auditor. In recent years, Ohio has allowed its lieutenant governors to direct other cabinet-level agencies – in an effort to increase their responsibilities and pay. Taylor was appointed director of Insurance, bringing her annual salary to $150,000.

After the Watergate scandal of the early 1970s, Ohio was among the first states to approve a conflict of interest and ethics law, which passed in 1974. It created the Ohio Ethics Commission and ultimately inspector generals to investigate alleged wrongdoing in the legislative and executive branches of government. A separate commission, the Supreme Court’s Board of Commissioners on Grievances and Discipline was created to investigate thousands of complaints annually in the judicial branch.

But all three agencies are appointed by the elected officials they are responsible for investigating.

The governor, cabinet members, legislators, judges and state agency directors are required to file annual financial disclosure reports. But those reports lack details about specific income levels and investments. More times than not, criminal convictions on ethics violations have been due to what was not included in the asset reports, rather than what was disclosed. Ohio law has no requirement to audit the forms, just policies for reviewing them for irregularities.

Another investigation in 2003 found that Gilbane Building Co. of Rhode Island and other construction companies provided golf, meals and lodging to win lucrative public school-building contracts. The executive director of the state program resigned and was fined $1,250 plus court costs for failing to report them.

The Ohio Ethics Commission investigation discovered that from September 1998 to May 2002, Randy Fischer accepted numerous improper lodging, meals, and exclusive golf outings from companies that had or were seeking multi-million dollar non-bid school construction contracts from the Ohio School Facilities Commission. The gratuities totaled $1,289, with two-thirds of that amount provided by one contractor, the Gilbane Building Co. This included golf outings at two exclusive courses in Rhode Island, and, the Ethics Commission discovered, overnight accommodations there, at the home of Thomas Gilbane, in August 1999.

The Gilbane Building Co. was awarded more than $10 million in school construction management contracts in Ohio during this time period. Also, Fischer failed to disclose all sources of the payments of golf outing fees and meals exceeding $75 that he was required to report on his annual financial disclosure statements filed with the Ohio Ethics Commission in 2001 and 2002. The source of both of these golf outings was the Gilbane Building Co.

And in 2010, former Democratic Attorney General Marc Dann was charged with two ethics violations for misspending campaign money on staff and personal entertainment. He was fined $1,000 and given community service.

Influence peddling also extends to the judicial branch of government. During “Coingate,” five of the Ohio Supreme Court’s seven justices had to recuse themselves from three public records lawsuits because they had taken large campaign contributions from Tom Noe or his wife.

In the mid-1990s, Ohio voters approved term limits for legislators and statewide officials in the executive branch in hopes of reducing abuses of power and the temptation for greed among the longest-serving members. But that also reduced the institutional knowledge needed to create laws, and increased the clout of Statehouse lobbyists.

Several times during the past decade, the Ohio General Assembly has passed laws to close loopholes or set new limits on campaign fund-raising. Each time, new creative, often secretive ways to funnel campaign money to elected officials in exchange for their favorable votes, have emerged.

Still, Ohio voters can share some of the blame for not helping reform the system. In 2005, they failed to support a series of proposals, including changes to the redistricting process.

And so it continues. In recent months, the FBI has investigated contracts with a Northeast Ohio school district, including copier equipment services from a company that employs a state senator as a consultant. Former Parma School Board member J. Kevin Kelley testified in February that he accepted a $10,000 bribe from Ohio Sen. Tom Patton, R-Strongsville, in connection with a school district copier contract.

Patton, who is Kelley’s third cousin, works as a consultant for Blue Technologies, a copier firm that did more than $489,000 in business with the district from 2001 to 2008, according to school vendor records. Kelley testified that the company initially had the low bid on the contract, but that he received the bribe after the school board continued to award the contract to the company without new bids.

The revelation came during a cross examination of Kelley, who also has been testifying as a prosecution witness in the corruption trial of former Cuyahoga County Commissioner Jimmy Dimora and Dimora’s one-time driver, Michael Gabor.

Patton, who has not been charged with a crime, told the (Cleveland) Plain Dealer that he was stunned by the allegations. “I flatly deny it,” Patton said. “I don’t have $10,000 to give anybody. It just didn’t happen.”

Asked why Kelley would make such a claim, Patton said, “I don’t know. I am simply a consultant to the company. I was never in any of the meetings.”

Patton has been a state senator since 2008 and previously served as a state representative from 2003 to 2008. Lt. Gov. Taylor also is on the federal prosecutors’ witness list but it was unclear why.

Some believe such problems result in part from dominance by one party. In Columbus, that party has been the GOP.

In his book, “A Columnist’s View of Capitol Square,” Lee Leonard, a former Statehouse reporter for the Columbus Dispatch wrote: “When one political party rules the roost, the checks and balances go soft. Those aligned with the majority begin to push the envelope because they can.”