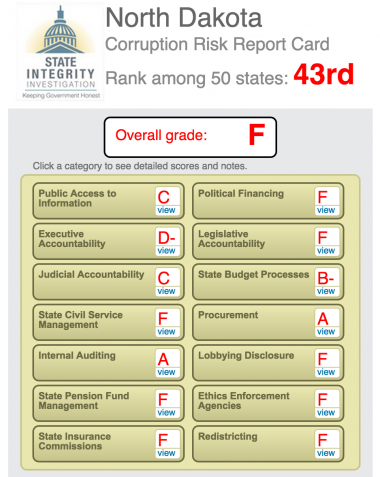 In a rural, closely-knit Plains state garnering national praise and attention for its booming economy, government officials aren’t going to agree with a newly-released survey criticizing their practices.

North Dakota earned a solid F and a score of just 58 on state government accountability and transparency, ranking it 43rd among the nation’s 50 states, in the State Integrity Investigation conducted by the Center for Public Integrity, Global Integrity and Public Radio International.

Many of the watchdogs that exist elsewhere are not part of the landscape in Bismarck, the state capital. Residents in the Peace Garden state — just 684,000 in all —believe they can pretty much be trusted to police themselves.

“Politics is personal . . . in a place where everyone knows everyone else,” notes The Almanac of American Politics. “For years there has been no voter registration because people obviously spot anyone who is not eligible.”

But whether this folksy approach to government creates the best results is questionable for those in favor of more regulations.

And so the state making national news for its thousands of job openings, low unemployment, booming oilfields and large state budget surpluses now finds itself ranking in the bottom 10 of a national analysis.

The ranking doesn’t surprise some close to state government, but they don’t agree with it either. Beyond criteria, lists and data points, many state officials and residents take pride in what local politicians here refer to as “the North Dakota way.”

While states like Illinois have faced a rash of corrupt officials and deficit spending, North Dakota has breezed through recent years with popular state officials, a booming diversified economy and tax relief for residents. The state had more than 20,000 job openings in December and was already on its way to another state budget surplus of hundreds of millions of dollars.

North Dakota’s small population makes it more likely residents will personally interact with their government officials. The high social capital—or connections among people—and the rural environment also create an expectation that elected state officials have the same “North Dakota work ethic” for which the agricultural state is known.

“North Dakota has been known as one of the most open states from the top—governor’s office— down to the smallest committee structure of a township,” said Roger Bailey, executive director of the North Dakota Newspaper Association.

Accessibility is particularly evident in the legislative branch. State legislators do not have personal staff or offices and handle their individual correspondence. They also publish their personal phone numbers for constituents to call them directly and allow residents to walk up to their desks in the legislative chamber to chat.

“You have more direct access to your representatives in this state than anyplace else,” said Rep. Kathy Hawken, R-Fargo.

It’s nice to walk through the Capitol and talk to legislators without going “through a bunch of hoops with their staff, like other states,” added Dustin Gawrylow, director of the North Dakota Taxpayers Association.

Although Republicans and Democrats disagree on the level of state oversight needed, both parties agree government openness and accessibility here is unlike any other state.

“The people are watching us. They know how to get ahold of us and, if we do something stupid or they don’t like, they’re going to hold our feet to the fire on it,” said conservative state lawmaker Blair Thoreson of Fargo.

That’s their story. Rankings aside, they’re sticking to it.

A belief in limited government

Just as demographics influence the state’s openness, North Dakota’s political makeup explains some of the low scores on the State Integrity Investigation scorecard.

Republicans oversee all but one of the state agencies headed by an elected official and make up about 75 percent of the Legislature as well. They believe in limited government, and many are philosophically opposed to more regulations or the additional bureaucracy of a state ethics commission.

“If there’s something that people don’t like, trust me, we’re going to hear about it,” he said.

Hawken, a moderate Republican, also voted against the bill, saying the ballot box should in effect be the state ethics commission.

But Democrats say a commission is needed. Democrat Corey Mock, a Grand Forks legislator who sponsored the recent bill, said legislators from other states can’t believe North Dakota doesn’t have such a body.

“We’re so quick to say there’s no need for an ethics commission, but what kind of message are we as a state sending?” he said.

The fact that Republicans voted down the ethics commission “speaks volumes about the issue of public integrity,” said Mark Schneider, former chairman of the state Democratic Party.

Others aren’t so sure. Jack McDonald, a state media attorney and lobbyist, said he doesn’t know what a North Dakota ethics commission would do since the state doesn’t appear to have the sort of problems with cronyism and bribery that come up elsewhere.

Gawrylow, director of the taxpayers association, also wondered how much good a commission would do.

“An ethics commission made up of people who are all looking out for themselves and each other isn’t going to do anybody any good,” he said. “You’re better to not have one than to have one that doesn’t work.”

A “different breed of cat”

Veteran political observers here say other low rankings on the scorecard are due to the fact that North Dakota does not have a full-time legislature.

For example, there aren’t restrictions for legislators entering the private sector after leaving government because the citizen legislature only meets in session 80 days every two years. Legislators who aren’t retired from other careers take a leave of absence from their regular jobs for legislative duties and then must return to work. Restrictions thus strike more than a few in government here as impractical.

Similarly, lobbying is a “different breed of cat” in North Dakota because it’s not a full-time job, either, said McDonald, the media attorney and lobbyist.

State law does require lobbyists to register and to report when $60 or more is “expended on any single occasion on any individual, including the spouse or other family member of a member of the legislative assembly or the governor, in carrying out the lobbyist’s work.”

Schneider, the former Democratic chairman, said he likes to think most legislators cannot be bought with a dinner and drinks.

“But, by the same token,” he asks, “why aren’t we requiring full disclosure, and why aren’t we saying to our representatives and senators that you just won’t take anything from them period. Why not?”

Senate Minority Leader Ryan Taylor, D-Towner, said North Dakota is “fairly wide open” in terms of what lobbyists are allowed to do. He thinks there could be better laws to create more balance between lobbyists and residents who don’t have money to spend weeks in Bismarck with legislators.

But Hawken, a Republican, said it would be “virtually impossible” for North Dakota to implement some of the restrictive lobbying laws that other states have. Because legislators don’t have staff and work part time, lobbyists are a good source of information, she said.

“Now, is it slanted to how they feel? Of course it is,” she said. “But I have never been pressured by a lobbyist … I’ve been asked to consider it strongly, but I have never been made to feel like I would be in trouble if I didn’t go along with their bill.”

She doesn’t want lobbyists to be so restricted that they can’t interact with legislators. But she concedes there are legislators whose first job every day is finding a lobbyist to take them to dinner.

There was some agreement among the political parties on state accountability laws that could be improved. Chief among them: campaign finance laws.

Candidates are required to report everyone who contributes in excess of $200 in the aggregate. They do not report how they spend donations, and there aren’t limits on individual donations.

Schneider, the former Democratic chairman, said the state’s campaign finance laws are “a joke.” Republican Hawken said reporting laws should be overhauled, and officials should have to report how they spend campaign money.

“It’s not that hard. Our campaigns are not the half a million dollar campaigns like they are in other states. It’s not a burden. So, we could do that, and we should,” she said.

Senate Minority Leader Taylor said the asset disclosure forms— known as statements of interests—filled out by candidates also should include more hard data so there’s greater awareness of conflicts of interest. The forms ask for basic information but don’t require monetary figures.

Gawrylow of the taxpayers association also wants to see those forms improved.

“Nobody really wants to take on that issue because it’s always the people that have the conflict of interest [who] are very popular,” he said.

Republican Secretary of State Al Jaeger agreed that there could be enhancements, within limits.

“I don’t know that we need to go to an extreme because, in some states, it gets to be very detailed where it just really … would almost inhibit interaction between people,” he said. “For our state, I don’t think that would be healthy, either.”

Scorecards aside, many North Dakotans are confident in the ethics of their state government because of the nature of the state.

McDonald, the media attorney and lobbyist, said many national surveys — like the State Integrity Investigation — are designed for large states.

“They don’t really realize sometimes that these small population states like ours, we’re really like a small town in a sense,” he said. “So, in state government, everybody knows what everybody is doing … it would be very difficult to get away with anything in North Dakota.”

But amidst that confidence are notes of caution as well. Democrat Mock doesn’t think the state can “put our head in the sand” and say nothing is amiss.

“In today’s day and age, transparency is needed more than ever to ensure there’s good governance,” he said. “And we’re not doing enough.”