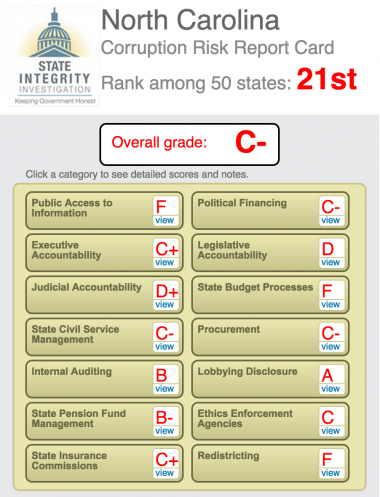 When an influential North Carolina lawmaker named Stephen LaRoque helped sponsor and pass a 2011 bill loosening regulations on billboards, he was the co-owner of five billboards and president of a firm that owned four others.

But when LaRoque asked the North Carolina Ethics Commission to review his key legislative role, it found no conflict, citing what it called a “safe harbor” stemming from the fact that his law would benefit everyone owning billboards.

The case reflected what many analysts say is the prevailing state of North Carolina’s ethics regulations: A lengthy set of rules has been enacted to help keep public officials honest, but enforcement has sometimes not been strict. They also complain that the extensive rules haven’t adequately curbed the influence of monied interests on state policymaking.

North Carolina –a state of 9.7 million residents that will host the Democratic National Convention in September — ranks 21st with a grade of C- and a score of 71 percent from the State Integrity Investigation, a collaborative project of the Center for Public Integrity, Global Integrity, and Public Radio International.

No state received an A, but North Carolina ranked lower than many others on measures of its public access to information, executive accountability, state budget processes, and its procurement. It bested all other states on its lobbying disclosure rules.

Many of its ethics requirements stem from legislation enacted in 2006, following a major scandal in which a powerful lawmaker bribed a rank-and-file legislator. In exchange for his vote the legislator received campaign donations and a government job for his son. A smaller package of changes was enacted in 2010, boosting disclosure requirements and imposing stiffer penalties for illegal fundraising.

The ethics legislation was “a breakthrough, a quantum jump in the way all kinds of things are regulated,” said Bob Hall of Democracy North Carolina, a non-partisan group that promotes government accountability. “We improved our regulation of the whole system.”

There have been some notable accomplishments, signaling the determination of some officials to punish ethics violators: In 2007 the two politicians involved in the bribe went to prison, in 2008 a legislator was expelled for violating ethics rules, and in 2010 a former governor pleaded guilty to a felony campaign law violation.

“For the most part, they lack teeth,” said Frank Perry, a former Ethics Commission staff member who now directs investigations for the Foundation for Ethics in Public Service, a North Carolina watchdog group. “They could be a serious force in preventing and exposing and attacking corruption, and sadly we don’t have any proof that they’re doing it.”

The Commission – with four members appointed by the governor and four by the legislature — oversees the filing of financial disclosure reports, issues advisory opinions to officials, and launches a few investigations every year in response to complaints.

But its actions are mostly confidential, and the most severe punishment it can issue is a private admonishment. The Commission also can refer cases to the Governor, legislative leaders, or other elected officials for further action, but it never has done so. The Commission received more than 300 complaints between 2006 and 2010, and investigated fewer than twenty.

Commission Executive Director Perry Newson said most complaints are dismissed because they lack adequate factual support; in some cases, complainants refuse to reveal their identities and sign sworn statements, as the law requires.

But Chris Fitzsimon of NC Policy Watch, the group that first called attention to LaRoque’s financial interests, says the commission “seems to be unwilling to issue firm rulings that might not be in the interest of public officials.”

In LaRoque’s case, his group noted, two state officials with ties to billboards withdrew from a mandated review of the law’s implementation, citing their own conflicts of interest. Of the ethics commission decision to approve LaRoque’s role, Fitzsimon said, “That’s a very narrow interpretation of ethics laws.”

A different state government agency – the Board of Elections — administers campaign finance laws, while the Judicial Standards Commission governs judges’ behavior; legislative ethics committees investigate allegations against members of the General Assembly; the Secretary of State regulates lobbyists; and an elected State Auditor serves as a general government watchdog.

Recent efforts by state leaders to combine agencies and clarify their duties have provoked turf battles and partisan debates, partly because some of the regulatory boards are controlled by Democrats and others by Republicans. But persistent confusion over enforcement authority was highlighted in January 2012, when a judge acquitted a lobbyist for a steel importer and other firms of charges that he had failed to register properly with the Secretary of State. The judge said the law is ambiguous and that the Secretary lacked authority to impose a $30,000 fine.

The lobbying reforms, for which North Carolina scored the best, grew out of a 2002 encounter in the men’s room at an International House of Pancakes in Salisbury. Present were two state legislators: Democratic Rep. Jim Black, who was desperate for power, and Republican Rep. Michael Decker, who was desperate for money.

Black needed one more legislator’s vote to be elected a third time as Speaker of the House. In the IHOP bathroom, as Decker later admitted in federal court, he agreed to provide it in exchange for $50,000 in campaign donations and a job for his son.

The deal was part of a pattern of corruption involving Black, investigators eventually concluded. The former speaker pleaded guilty to accepting money from industry groups in exchange for legislation and admitted to the State Board of Elections that he collected blank checks from donors. By 2007, both he and Decker were in federal prison.

Other North Carolina politicians, meanwhile, spent campaign money on children’s clothing, home repairs, and merchandise from Victoria’s Secret. Lobbyists not only raised funds for politicians’ campaigns, but invited them to sports events and golf outings, and picked up the checks for legislators who ate at expensive restaurants near the capitol.

“One lobbyist told me that if he took three legislators out to dinner, three others legislators would send their checks over to him,” said Jane Pinsky of the North Carolina Coalition for Lobbying and Government Reform. “There were legislators who thought it was their prerogative to be wined and dined.”

State legislators responded to the disclosures of these acts by prohibiting the personal use of campaign funds, banning gifts from lobbyists, and establishing the ethics commission. The ethics law also restricted contributions and gifts from lobbyists to elected officials. While Pinsky said the revised law still has a few loopholes that allow lobbyists to entertain lawmakers, there’s no longer a culture of lavish hand-outs.

“Lobbyists and legislators work really hard to make sure they don’t cross the line,” she said. “I don’t think that everyone even saw the line before.”

The law has a few holes in it. Lobbyists no longer can buy meals for individual legislators, but still can sponsor receptions for large groups of lawmakers. Benefactors also can treat public officials to trips or outings that are classified as “educational meetings.”

Though lobbyists no longer personally can contribute to political campaigns, the political action committees or interest groups that employ lobbyists are free to donate when the legislature is out of session or on recess. Political parties and caucus committees also have taken a more active role in funneling money to individual candidates, allowing politicians to bypass some of the fundraising restrictions.

“Every time I think we’ve done something smart, they do something at least as smart if not smarter,” Pinsky said. “There’s a level of corruption that has to do with the campaign finance system and the way money dominates politics…that has not gone away,” said Hall of Democracy North Carolina.

Public officials still engage in “pay to play” – in which major donors are rewarded with favorable legislation, state contracts, or appointments to powerful government boards and commissions.

“They put in an inordinate amount of money and have special status,” Hall said of big campaign contributors, noting that relatively small industries, such as video poker operators, have gained influence in state government by showering politicians with donations.

He recently documented how contributions from the commercial finance industry helped Republicans win control in 2010 of both houses of the legislature for the first time since the late 1800’s. Months later, GOP leaders tried to fast-track a bill allowing the industry to charge consumers higher interest rates.

“There was over $100,000 in small donations from commercial lending outfits going to targeted Republican challengers who became the majority,” Hall said. “It looks like a pay to play.”

The funds were part of a large infusion of money in 2010 from wealthy conservatives, often to advocacy groups and think tanks, which prompted the New Yorker magazine to profile North Carolina politics in October 2011 under the headline, “State for Sale.”

Leaders of both parties still reward their contributors with appointments to powerful government boards and commissions, such as the University of North Carolina Board of Governors, the Wildlife Commission, and the Board of Transportation. The transportation board “acts like an ATM machine for the governor and other state politicians,” Hall wrote in a 2008 report.

Hackney notes that during his tenure as Speaker, the House of Representatives expelled a member for violating ethics rules – the first time in more than a hundred years a North Carolina legislator was forced from office. A legislative ethics committee concluded that Rep. Thomas Wright – a top lieutenant of Jim Black – failed to report $180,000 in campaign contributions and mishandled a similar amount of money in loans and charitable contributions. Wright is now imprisoned for fraud and obstruction of justice.

Since then, another North Carolina House member resigned amid an investigation of questionable campaign spending, the State Board of Elections assessed almost a million dollars in fines and penalties against politicians who violated campaign finance laws, and in 2010 former governor Mike Easley pleaded guilty to a felony for failing to report a contribution.