Why Nevada ranked 42nd of 50 states 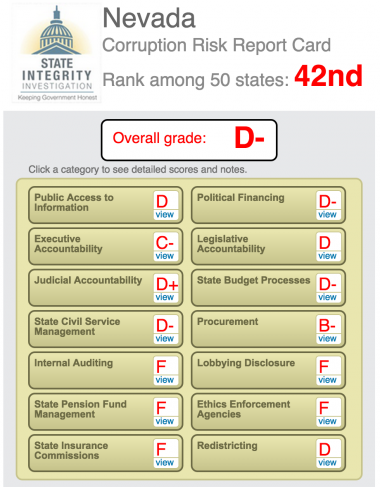 Die-hard Nevadans tout the state’s so-called “citizen legislature” as a virtue. But the State Integrity Investigation suggests that transparency is compromised by lawmakers who meet for just four months every other year.

Nevada ranks 42nd among the states, with a grade of D- and a numerical score of 60 from the months-long probe, a collaboration of the Center for Public Integrity, Global Integrity and Public Radio International.

The state’s legislative framework factors heavily in that poor grade. Since part-time lawmakers must earn a living through other jobs, all face potential conflicts when proposed laws touch their sources of income.

Other gaps in ethics protection – from flimsy lobbying reporting requirements to a huge loophole in the state’s open meeting law to unlimited gifts allowed for public officials – further erode accountability:

Gov. Brian Sandoval’s office did not respond to several requests for comment. Ross Miller, Nevada’s secretary of state, said many of the practices cited by the State Integrity Investigation as inadequate “are policy issues that are governed by our state’s Constitution … or long-standing statutes.”

Miller, who advocated vigorously for the reforms to campaign-finance law adopted by the State Legislature in 2011, said he’s a “strong believer that lifting the veil of secrecy that often shrouds governmental procedures benefits both the political process and the public’s faith in government.” He is the son of former Nevada Gov. Bob Miller.

The state of 2.7 million residents scored well in some areas, such as the variety of state records available online free to the general public. The Nevada Electronic Legislative Information System, which debuted in 2011, lets the public track bill status and hearings, floor sessions and other meetings.

In 1998, voters amended the Constitution to limit legislative sessions to 120 days or less. But 10 special sessions have been held since 2001, always crisis-based.

Given the Legislature’s tight 120-day regular sessions, “shortcuts” have become the norm in Nevada.

But he believes the arrangement undercuts the public’s ability to provide input, while limiting the ability of each house to separately shape the budget.

“In most places, if the state House makes a decision, people can get active and go to the Senate,” said Bernick, interim dean of the UNLV College of Urban Affairs.

Other timesavers that critics say shortcut democracy: Last-minute bill introductions and late-night legislative sessions without any requirement to give advance notice.

Nevada also scored low on the extent to which it asks its public servants – elected and appointed – to disclose their personal financial assets. That makes it hard for citizens to judge each servant’s affiliations and independence.

Many Nevada public servants legally bypass the annual requirement to disclose personal assets because they serve on state boards that pay a modest per diem; the low pay puts such board members below the threshold for reporting, even if the board wields significant power, such as awarding disability status for state workers or deciding if an official’s behavior was unethical.

When public servants do disclose their financial assets, the state monitors the disclosure statements only for timely filing. It does not publicize or audit the contents of the disclosures.

Thus, even a Christmas gift as extravagant as the $85,000 that gaming Commissioner Dr. Tony Alamo Jr. disclosed receiving in 2010 from a trust associated with some members of the prominent Ensign gaming family did not require further detail. Nor did any Nevada media groups report on the Ensign Trust’s holiday largesse.

Nevada law sets no maximum gift limit for its officials.

Alamo did abstain from an emergency vote of the Nevada Gaming Commission earlier in 2010, which paved the way for a group including some Ensigns to take over the Red Garter, a troubled hotel-casino in West Wendover, just days before it was to go on the auction block.

Alamo said that he abstains from all votes involving the Ensigns, as the two families have been close for several generations. “Mr. (Mike) Ensign is like a father to me,” the physician and commissioner said, describing Ensign – the father of former U.S. Sen. John Ensign – as the person who gave the gift.

Lawyer Scott Scherer, who represented primary owner David Ensign in the Red Garter transaction, said Alamo’s gift was unconnected to the hotel deal. Scherer said Michael and Sharon Ensign have no stake in the hotel. David Ensign, the former senator’s half-brother, holds the majority membership of the company that owns the Red Garter, according to Scherer. Other membership is held by trusts for several Ensigns who are of minor age, the lawyer said.

Reno lawyer Caren Jenkins and Las Vegas lawyer Alan Lefebvre, who have each served on state boards or commissions, said Nevada’s part-time public servants are a mix of the dedicated and less-than-dedicated.

“It’s a resume builder,” said Jenkins, executive director of the Nevada Commission on Ethics since September 2009. Spotty attendance and limited expertise are typical for some appointees, she said.

“There’s a regional bias, of the ‘wild West,’ that resonates through our law. … if it’s not broken, don’t fix it,” said lawyer Lefebvre.

Lefebvre – vice president of the State Bar of Nevada – said the state depends more on “the morals and ethics of the people … than an infrastructure of rules.”

Nevada rarely sets a “cooling off” period for elected or appointed officials who leave public office to take a job in the business sector. The risk of no cooling off: The state official could be induced to act favorably toward a company before leaving office, knowing a lucrative private-sector job is in the waiting.

Lawyers who counsel the state’s public utilities commission are one rare group subject to a cooling-off period; yet the state has granted several “cooling off” waivers, said Jenkins of the ethics commission.

Nevada government often devises informal ethical codes for its workers, or grants them vast discretion, rather than cementing formal rules into statute.

State purchasing officials in Nevada, for example, are guided in part by a code of ethics that is not in state law, but has been adopted by management. This internal code matches that of the National Association of State Procurement Officials, said Kimberlee Tarter, deputy administrator of the Nevada State Purchasing Division.

Nevada regulation allows “sole sourcing” of professional services such as engineering, architecture and other costly design work. But being exempt from a comparative bidding process does “not mean you move forward without the same due diligence,” Tarter said.

The state rarely bars businesses that have skirted bidding regulations from again seeking state contracts; Tarter, the state official, could cite just one instance, from more than a decade ago. Nevada law does not bar former state workers convicted of corruption from applying to work again for the state.

“For all practical purposes, if they were convicted of embezzling, they wouldn’t get hired again. It just wouldn’t happen. We’re a pretty small state. Everyone knows that,” said Mark Stevens, vice chancellor of finance for the Nevada System of Higher Education, who was assembly fiscal analyst at the Legislative Counsel Bureau for more than 25 years.

Voters have resisted some reforms. In November 2010, for instance, voters killed measures that would have switched Nevada judges from an elective to appointive system; instituted a formal system to measure judges’ performance; and added an intermediate appeals level.

The radical judicial measures, defeated by voter margins of 53 and 58 percent, were pitched after a 2006 Los Angeles Times series on Nevada judges focused on conflicts of interest. The “Juice vs. Justice” series asserted: “In Las Vegas, they’re playing with a stacked judicial deck.”

Sondra Cosgrove, a history professor at the College of Southern Nevada, offers her own theory on why Nevada has enjoyed an extended “adolescence.”

Personalities and special interests, Cosgrove said, have always been key factors in civic life in Nevada, the Battle-Born State, since its birth in 1864, during the Civil War. It bypassed Congressional approval for statehood, in a unique deal brokered by President Lincoln. Part of Lincoln’s deal required Nevadans to rapidly pass a state constitution, which enshrined mining as a special interest, which continues to this day.

In 1864, the Nevada constitution guaranteed that mining would pay tax “at a rate not to exceed 5 percent of the net proceeds,” no matter how high the value of the precious metals extracted from Nevada mines – which in 2012 are the No. 1 producer of gold in the United States.

In 2011, reinforcing mining’s sweetheart deal in Nevada, state legislators were surprised to learn from the state’s tax chief that his auditors hadn’t conducted financial audits of mining companies in two years, despite the rough economy, low state revenues and gold’s value rocketing to more than $1,500 an ounce.

The chief, Dino DiCianno, abruptly resigned amid the firestorm but proffered that his office simply lacked the staff to conduct the audits.