Why Missouri ranked 16th of 50 states 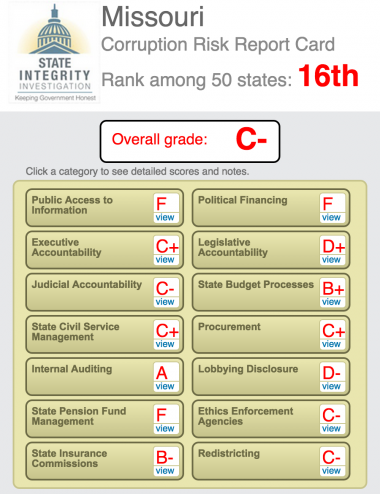 Congressman Willard Duncan Vandiver declared in an 1899 speech that “frothy eloquence” neither convinced nor satisfied him. “I am from Missouri. You’ve got to show me.”

But today, the Show-Me State is partially opaque.

That’s the picture that emerges from the State Integrity Investigation, a collaborative project of the Center for Public Integrity, Global Integrity and Public Radio International. Missouri ranks 16th among all states with a grade of C- and a numerical score of 72. Not a single state received an A.

The scores result from interviews with more than 40 sources – including journalists, academics, lobbyists, legislators, and state officials – along with a wide-ranging review of state statutes, constitutional provisions, legislative rules, judicial guidelines, and other documents.

While blatant corruption is relatively rare in this state of 6 million residents, questionable behavior abounds within state government – particularly among lawmakers – and an undermanned ethics agency struggles to investigate and punish offenders.

Like other states, Missouri has experienced budget difficulties throughout the recent recession and bumpy recovery. For example, if projections from January hold true, the state will collect approximately $400 million less in net general revenue next year than it did in fiscal year 2008.

But sources did not cite budget problems in critiquing the openness of Missouri government. In fact, one budget watchdog rated Missouri an eight on a scale of 10 in terms of transparency.

“There’s a lot of access to information you would not necessarily get in every state,” said Amy Blouin, executive director of the Missouri Budget Project, a nonprofit dedicated to improving economic opportunities for low- and middle-income families.

Missouri, it seems, has a split personality.

On the one hand, it’s a state where, as former Insurance Director Scott Lakin recalled, vigilant bean counters billed him $1,500 for personal use of a state plane after he rushed to be with his wife and daughter after they were in a serious car accident.

On the other hand, it’s a state that paid $500,000 in 2009 to a former gubernatorial staff attorney to settle a wrongful termination and defamation lawsuit. The attorney, Scott Eckersley, claimed his firing came after he opposed the destruction of e-mails that were the subject of an open-records request. The administration of then-Gov. Matt Blunt said it dismissed Eckersely for poor job performance.

But there is a near consensus that a largely unfettered flow of campaign money presents big ethical problems. Missouri is one of just four states to have no contribution limits, according to the National Conference of State Legislatures.

“Money is way too involved,” said Bob Johnson, a moderate Republican who spent 23 years representing the Kansas City area in the General Assembly. “It has way more to do in the outcome [of legislation] than it should.”

Missouri campaign-finance law does include some basic restrictions.

For instance, recipients of any contribution (including loans) from any single donor of more than $5,000 must electronically report it to the ethics commission within 48 hours of its receipt.

Moreover, Missouri has extensive reporting requirements aimed at helping the public track the flow of dollars, and the records are searchable on the ethics commission Web site.

Well and good, but legislative term limits create a special problem, say observers. According to a constitutional amendment passed by voters in 1992, lawmakers can serve no more than eight years in either body of the General Assembly.

Critics said term limits create a potential for unethical behavior as a lawmaker nears the end of his or her final term.

Missouri Rep. Jason Kander, D-Kansas City, has deep concerns. Kander is not seeking re-election in 2012, opting instead to run for Missouri Secretary of State.

“I have had people tell me they have been approached by legislators still serving asking them for a position as a lobbyist after they leave the Legislature,” Kander said. “The conflict of interest there is obvious.”

As with campaign finance, Missouri has numerous reporting requirements to police the actions of lobbyists. For instance, lobbyists must file monthly reports detailing their activities.

The reports – available online – list expenditures spent on behalf of public officials, their staff and employees, and their spouses and dependent children. Reportable expenses include food, beverage, gifts and entertainment (including time, venue and, nature).

In the eyes of at least one lobbyist, this public reporting has made members of the General Assembly much more attuned to ethics than they used to be.

For the past decade, Otto Fajen has lobbied for the Missouri National Education Association, which counts teachers, librarians, custodians, and college faculty among its 35,000 members.

Prior to that, he spent 11 years as a senior research analyst in the Senate Research Office of the General Assembly.

Back when he started in the legislature, Fajen said members rarely refused a meal from a lobbyist. Now, he said, “There’s a bunch there that don’t take anything from anybody.”

But some good-government advocates don’t give the benefit of the doubt to lawmakers and lobbyists, and say the ethics commission does not have enough manpower to adequately police lobbying or any of the other areas it oversees.

“I don’t think the ethics commission is proactive in any meaningful way. It is largely a reactive agency,” said George Connor, a political science professor at Missouri State University in Springfield.

The commission has a staff of 20 full-time personnel and annual expenditures of about $1.2 million, according to an August 2011 report by the Missouri State Auditor.

During the two-year time period ending June 30, 2010, the commission received approximately 390 complaints and completed over 280 investigations, said the report

But, the audit noted, staff must also review:

“The commission has a fairly small staff,” the executive director of the commission, Julie Allen, said in an interview. “At this point, really, we review filings as we are able to, that’s just the process that we use.”

It’s a place, for instance, where legislators can serve as paid political consultants for their colleagues in re-election campaigns. These arrangements can open up potential conflicts of interest like one that arose in 2008 involving Republican Rod Jetton, who was then Speaker of the House.

Jetton raised eyebrows when he took the unusual step of naming a freshman Republican (and client) as floor manager for two major bills in the midst of the representative’s campaign for a congressional seat. That gave the appearance that Jetton was boosting his client’s election chances by increasing his visibility in the House, though both men denied that charge.

He and other supporters won a partial victory in 2010, when the General Assembly granted the ethics commission the authority to initiate investigations. Prior to that, it could act only after the filing of a complaint.

Kander was lukewarm about the final compromise language, since it required a unanimous vote of the six-member commission to pursue an investigation on its own.

But the Missouri Supreme Court stripped the commission of that authority in February, striking down the 2010 ethics legislation. In a ruling that eliminated several other provisions aimed at strengthening campaign finance regulations, the court ruled that the legislation had been unconstitutionally attached to an unrelated measure.

Still, Missouri can sometimes be a model of openness.

“If you want information about the state of Missouri, it’s out there,” said Connor, the political science professor. When it comes to the general availability of public information, Connor gave Missouri a score of 90 on a 100-point scale.

“I would never say 100 percent,” he added, “because there is some state agency, some state institution, like Missouri State, that’s not going to give information out somewhere along the way.”

One significant deficiency is the appeal process, said Charles Davis, an associate professor with the Missouri School of Journalism and the former executive director of the National Freedom of Information Coalition.

The only way to appeal an alleged Sunshine Law violation is through a lawsuit, rather than through a less costly administrative avenue.

“There’s a lot of danger in a statutory regime that does not encourage intervention in any way other than through litigation,” Davis said.

In May 2010, Missouri State Auditor Susan Montee issued a report summarizing Sunshine Law problems in 59 audits conducted during the two previous years. In one tally, her office raised concerns among 47 governmental bodies for improperly documenting the reasons for closing a meeting.

In two dozen cases, the auditor expressed concern about policies and procedures regarding public access to records. In St. Joseph, for instance, the city had documents simply marked “confidential” without any reference to a Sunshine Law exemption.

Missouri is also a state, some observers said, where openness is just window dressing.

One example is the legislative redistricting process that followed the release of the 2010 census figures, said Johnson, the former state lawmaker. He is president of Let Missourians Decide, a group that encouraged lawmakers to eschew incumbent protection as an overriding factor in redrawing the districts.

In Missouri, lawmakers and the governor handle congressional redistricting through the legislative process. Bipartisan commissions appointed by the governor redraw the state’s 34 Senate districts and 163 House districts.

Leaders of both processes didn’t go out of their way to publicize proceedings designed for public input, Johnson said.

And even though the commissions establishing the seats in the General Assembly dutifully took public testimony in hearings throughout the state, Johnson doubted whether it made a difference in concocting the maps. As for the public, he said, “If they ever benefited, it would be by accident.”

Citizens and government watchdogs may only have themselves to blame for a lack of accountability in Missouri.

The state has a weak public-records-seeking culture, Davis argued. “You have got to have people pushing the law,” he said. “We don’t have that really.”

State law requires that pension funds file with the General Assembly’s Joint Committee on Public Employee Retirement “a detailed list of administrative expenses of the plan including all fees paid for professional services, a detailed list of brokerage commissions paid.”

“No one has ever asked for them,” Scoville said.