Why Mississippi ranked 6th of 50 states 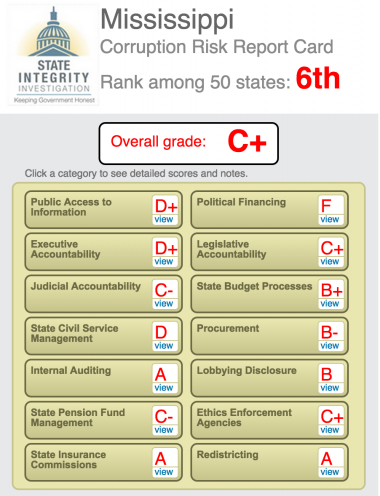 In Mississippi, limits on campaign contributions are almost non-existent. Politicians can even use donations for personal living expenses, putting the state outside the national norm.

“I don’t think political officials should have a golden parachute just because of their office,” said state Rep. Hank Zuber, R-Ocean Springs, who routinely files legislation to prevent public officials from using campaign donations for their own use or from keeping the funds after they leave office.

Legislation sponsored by Zuber to halt the practice failed during the 2012 session, as it had before. Nonetheless, Zuber said in a recent interview that he intends to try again.

There are significant nods to transparency in Mississippi: All campaign contributions and expenditures of more than $200 must be reported annually in non-election years. A candidate who misses a deadline for filing a campaign finance report can be fined $50 per day; a spokeswoman for the Secretary of State’s office said that such lapses are rare, probably because politicians want to avoid bad publicity. The 3-million citizen state also gets high marks for legislative accountability, budgeting and lobbying disclosure.

And so the state receives a C+ and a numerical score of 79 from the State Integrity Investigation, a collaboration of the Center for Public Integrity, Global Integrity and Public Radio International. Mississippi’s grades rank it sixth among the nation’s 50 states.

A lack of aggression

But reformers say there is plenty of work left to do. While the Secretary of State is keeping an eye on campaign finance reports, it’s unusual for prosecutors to pursue criminal charges against those who violate campaign finance laws. Patsy Brumfield, a political reporter with the Northeast Mississippi Daily Journal, said she has heard anecdotal evidence of candidates failing to report donations of more than $200 or services, such as airplane trips, of similar value. Such instances would be a clear violation of the law.

And yet “there doesn’t seem to be much interest in policing those reports except to ensure that they’re filed,” said Marty Russell, a journalism instructor at the University of Mississippi and former news reporter.

The last major push for campaign finance reform in the state came during the 2004-05 legislative session. There were efforts to ensure that loans a candidate might receive for personal use were publicly reported and that independent groups that make political expenditures disclose their donors.

State Rep. Tommy Reynolds, a Democrat and former chairman of the House Apportionment and Elections Committee, said in a recent interview that Mississippi is “kind of like the Wild West” in that independent groups don’t have to reveal their donors even as they run TV commercials in favor of, or against, a particular candidate. Certain “magic words” – e.g., “vote for” or “vote against” – can’t be uttered. But the ads can generally characterize what the independent group believes to be good or bad about a candidate.

Secretary of State Delbert Hosemann, whose office is charged with overseeing the campaign finance law, doubts that the state – even if it wanted to – could force such groups to file disclosure reports, based on recent U.S. Supreme Court rulings.

Hosemann concedes that reports candidates and political action committees must file with his office don’t provide a thorough breakdown of donations and expenditures. A candidate, for example, might file a report indicating that he or she paid a consulting group a lump sum for political work. But the reports don’t detail how the consultants used the money.

In coming years, Hosemann said the Legislature might consider proposals “to dig below the first level” to ensure that the reports are more transparent.

While few recent changes have been made to Mississippi law governing campaign contributions and expenditures, there have been significant additions to the open-records statutes.

During the 2009 legislative session, a bill was passed and signed into law by Barbour to give the state Ethics Commission the authority to hear open-records disputes instead of pursuing costly litigation. After the law was changed, the commission issued guidelines for government entities to use when dealing with open records issues.

The guidelines, explained Tom Hood, the commission’s executive director, provide “concrete suggestions” for both the agency and the requester. The agency, for instance, shouldn’t charge excessive fees for producing the records.

But the 2009 law didn’t address all issues; rulings of the Ethics Commission, for example, aren’t binding. Leonard Van Slyke Jr, a Jackson attorney who specializes in media law, said that “in a perfect world” they would be – though he believes most public bodies follow them.

Another matter that should be addressed is the Ethics Commission’s lack of subpoena power to deal with public records disputes, Hood said. Subpoena power would give the commission the authority to find out whether a government agency had denied a record to a requester for legitimate or illegitimate reasons. Records can be denied in Mississippi only for certain reasons – when they pertain to personnel matters or pending litigation, for example.

Legislation is alive in the 2012 session of the Legislature designed to further specify the fee that can be charged to provide a public record. The legislation also would try to restrict governmental agencies from contracting with expensive private attorneys to gather the information for the public records’ request.

During the 2011 legislative session, another significant change was made to the state’s open-records law. The Meetings Accountability Act clarified that a public official and not a government entity would be held responsible and fined for violations of open meetings and open-records laws.

The fine is $500 for the first violation of the open meetings law and $1,000 for the second offense. The fine for violating the open records law is $100 per incident.

Supporters of the legislation said public officials would be less apt to break the law if they would personally suffer the consequences.

Other transparency issues could be addressed in the coming months. In years past, Barbour, who left office in January because of term limits, tried to take state employees out from under the state Personnel Board, which provides a certain level of civil service protection.

Barbour advocated temporarily lifting board protection, saying it would make it easier for agency heads to downsize their staffs in response to recent economic woes.

A Democratic-controlled House has blocked such efforts. Beginning this year, however, Republicans control both chambers of the Legislature and the governor’s office. Gov. Phil Bryant and the Republican legislative leadership favor removing the civil service protection for a period of two years. The legislation appears likely to pass during the 2012 session.

A commission formed by Barbour also recommended changes to the Public Employees’ Retirement System, or PERS.

According to Pat Robertson, PERS executive director, the system only has funds to pay about 65 percent of its projected costs over a 30-year period. The industry standard is 80 percent.

Robertson said the system is sustainable, but liability issues — caused by PERS’s failure to meet the standard — could negatively impact the state’s credit rating.