Why Maryland ranked 40th of 50 states 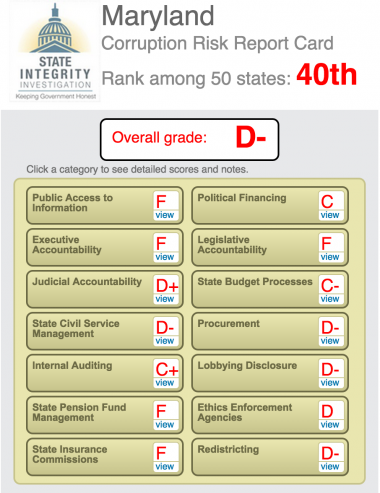 What happened to State Sen. Ulysses Currie is a Maryland sort of story.

The Prince George’s County Democrat, former head of the Senate Budget and Taxation Committee, went to bat repeatedly for Shoppers Food Warehouse in the corridors of power in Annapolis and around the state — pushing development deals, transfer of a liquor license and new stoplights near company outlets. But he didn’t tell state officials, or mention on state ethics forms, that the grocery store chain paid him around $245,000 over five years for this advocacy.

The feds said the payments amounted to bribery. A jury disagreed, acquitting Currie last fall on charges of bribery, extortion and conspiracy. But even Currie’s lawyer admitted that some of his activities constituted a “conflict of interest” on which the Senator “shouldn’t have voted.” The Senate concurred, voting unanimously to censure Currie in mid-February, but it remains to be seen whether he’ll no longer serve on conference committees, as was recommended by a legislative ethics committee.

Sadly, such tales are far from unusual. “Much of Maryland’s political history,” says The Almanac of American Politics, “reads like a chronicle of rogues.” Indeed. Democratic Gov. Marvin Mandel stepped down in 1977 after being convicted of racketeering and mail fraud charges. He served 19 months in a federal prison before his sentence was commuted by President Ronald Reagan in 1981 and his conviction ultimately overturned in 1987. Most famously, Republican Vice President Spiro Agnew was prosecuted in 1973 on bribery and tax fraud charges related to his service as Maryland Governor in the 1960s. He agreed to plead no contest to a single charge and resigned from office.

Few would argue that government accountability in Annapolis hasn’t improved some since then. The political financing system, for instance, is generally well-regarded, though not without significant loopholes. And the historic Statehouse remains a cozy, clubby hangout without a lot of sunlight or transparency.

“We’ve got some people who have been around an extremely long time and it is not in their interest to have things open up,” said one prominent private-sector policy official. “The kick is, it is better than it used to be. Annapolis is still very collegial, [but] not as much an old boys’ place. It’s an insider’s place.”

The continued darkness means significant problems remain in this state of 5.8 million residents. Procurement policies are byzantine, auditing results are often ignored. Access to information is poor and the resulting executive and legislative branch accountability leaves much to be desired. Because of such issues, Maryland receives a grade of D- and a numerical score of 61 from the State Integrity Investigation, ranking it 40th among the states.

In Maryland, the distance between government and the private sector is slim indeed. Since the legislative session officially runs just 90 days a year, legislators typically have other jobs.

There are regulations requiring that they list other employment on annual financial disclosure forms, but the effective limits of these rules were demonstrated by Currie, who went years without reporting his client. Several senior government officials testified at his trial that he did not disclose his relationship with Shoppers Food Warehouse in meetings.

While there are limited cooling off periods for former Maryland legislators before they can lobby the General Assembly, no such restrictions exist for Maryland executive branch employees and officials regarding their former offices. State law prohibits former officials from participating in matters in which they worked while in government. But these regulations have proven mostly ineffective in stopping former government workers from trying to cash in on their former positions and contacts or in advising companies on issues related to their former agency.

R. Scott Oswald, a managing partner specializing in employment law at the Washington, D.C.-based Employment Law Group, said that “this is an area where there could be some significant changes for the better.”

“The reality is that although prohibitions exist, it is a revolving door [between government and private sector] with people coming back to lobby the agency where they worked,” said Oswald. “There is a strong case to be made that it works for a particular agency, [but] the bar ought to be much [higher].”

The atmospherics were illustrated by a June 2011 Office of Legislative Audits (OLA) investigative report, which details how a manager with the State Highway Administration violated ethics standards by taking a position with a construction firm 12 days following retirement, after the company received a $16 million contract he had helped secure.

That same OLA effort also found a procurement manager personally solicited two companies for funds to sponsor a golf tournament from which he would financially benefit. Contracts were then expedited for the firms.

Auditors also found that state officials asked multiple construction firms to cook their books to help conceal overspending. Some agency higher-ups even tried to block the investigation, telling workers to restrict their dealings in the matter to within “proper channels.” Robert P. Gay, director of the agency’s procurement office, resigned four months after the report.

Under state law, companies or individuals convicted of this sort of corruption can be banned from doing business with the state, but bans do not have to be permanent and sources say enforcement is lax. Maryland finished dead last in the State Integrity Investigation’s rankings for procurement practices.

It didn’t take long for questions to be raised following the election of Democratic Gov. Martin O’Malley in November 2006. In 2007, the Board of Public Works approved $4.6 million in state funds for Queen Anne’s County to purchase 271 acres for preservation, even though the purchase price exceeded the appraised value. The purchase was from a company with extensive political and business connections run by a member of O’Malley’s transition team.

“It’s a one-party state; there is no enforcement function at all,” said Marta Mossburg, a senior fellow at the Maryland Public Policy Institute as well as columnist for the Baltimore Sun and Frederick News-Post newspapers, in regard to public procurement. “There is just no accountability in how the state does things.”

Mossburg and others were effusive in praising OLA for its efforts to uncover corruption. But enforcement is another matter. Len Lazarick, editor and publisher of MarylandReporter.com, said that the OLA’s “great reports” often “go down this black hole.”

When OLA identifies deficiencies at an agency, “they say they’re correcting the problems, but sometimes they don’t.” said Lazarick.

Mossburg pointed to a March 2007 audit showing thousands of instances in which more than 20 Maryland Aviation Administration and Maryland Transportation Authority employees had used state computers to look at sexually explicit material during work hours. A spokeswoman for the transportation authority said “disciplinary action was taken and procedures put in place to prevent and detect inappropriate use of the Internet,” but declined to disclose specifics because they involved personnel matters. A spokesman for the aviation administration said employees were disciplined, and “additional technologies, procedures and training were put in place” to prevent a repeat of similar behavior.

“It’s been going on a long time,” said the private-sector policy official.

Each governor’s commission and board appointments are submitted for Senate approval in a process long referred to as “green bag” nominations.

The term is based in part on the historic use of a green bag to deliver these nominations. These jobs typically go to private- and public-sector political supporters, public union officials and other special interests.

These posts are key, veteran observers say, to understanding the role that single party dominance has played in limiting the integrity of Maryland government. While Republicans have held higher political office over the years, the 2-to-1 breakdown of registered Democrats to Republicans has long allowed for nearly unchecked Democratic control. Critics across the ideological divide believe this has helped ensconce a patronage-rich, cronyism-dependent civil service.

Greg Smith of Community Research, a nonprofit good-government group in the state, said that “much of what I’ve seen in Maryland makes the case for a robust multi-party system.” The state ranked 31st in civil service management in the State Integrity Investigation.

One of the Maryland’s most significant transparency challenges is a lack of substantive or easy access to government information. In fact, the State Integrity Investigation ranks Maryland 46th among the states in access to information.

Governor O’Malley and his backers have heavily promoted several data-access websites, including StateStat, BayStat, and GreenPrint, as examples of major improvement and key tools for increasing government transparency.

At an April 10, 2007 bill signing ceremony enacting StateStat, O’Malley said that through the website, “we are going to do everything we can to make our government more open and transparent. … It is going to be our foundation for restoring accountability and for driving our progress.”

But Smith of Community Research argued that “nothing could be farther from the truth.” He said the state’s spending transparency websites provide little more than window dressing and O’Malley is “about providing the information he wants in the ways he wants.”

Beth Blauer, director of StateStat and BayStat, said that she “will be the first one to admit we are working to make the data more accessible.” But she asserted that no one in Maryland government has ever asked for data to be withheld. She added that state officials are also moving toward adoption of a new database platform allowing for full public, electronic-level access, addressing one major concern of critics like Smith.

While Maryland’s Public Information Act theoretically grants broad access to public records, critics say vague exemption language allows government agencies to deny information requests for almost any reason. With no overall oversight mechanism, each state agency handles its own public information requests, with its own response and billing practices. If a request is denied, the only redress is appealing to the same denying agency official or initiating a costly court challenge. In practice, this means that many public information compliance issues go unresolved.

Furthermore, electronic access to most state information is unavailable.

The lack of online availability is best demonstrated by how Maryland controls the asset disclosure forms of politician and key state officials. The public is allowed access under state law, but can only get paper copies by visiting the State Ethics Commission — even though the forms have been filed electronically for years. Commission practice is also to inform any official when their records are requested, creating a potential chilling effect.

Mossburg and others argue that one result of this limited transparency is that legislators get away with regularly directing hundreds of thousand of dollars in state funds to nonprofits with which they have personal ties. State law has no significant restriction on this practice, though reporting of ties on disclosure forms is required, if not always followed. One prime example is a 2009 bill by Baltimore Democratic Del. Hattie N. Harrison providing $75,000 in state funds for a nonprofit community group for which she serves as president and employs her son.

There are some glimmers of hope. Legislation passed by the General Assembly in 2011 allows requesters to get records in an electronic format from most government agencies. But like much in Maryland, the legislature’s action provided only a partial solution. Agencies only have to provide information electronically if it already exists in that format. The legislation does not require agencies to put information online. Agencies can also strip out metadata before release. Most importantly, the law contains no enforcement mechanism to ensure agency compliance before sunsetting in 2013.

It’s a Maryland kind of story.