A view of the Atlantic Ocean from Cadillac Mountain in Acadia National Park, Maine. Shutterstock

Why Maine ranked 46th of 50 states 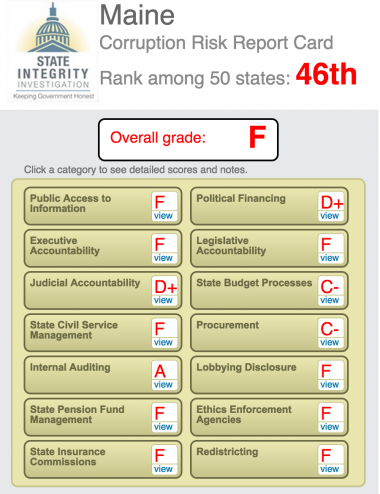 Maine is New England’s biggest state, and residents love to boast that all the region’s other states could fit into it with room to spare.

It’s home to 1.3 million residents, to be precise, in an area of 30,843 square miles, of which 17 million acres are forest. That works out to an average of only 39.1 Mainers per square mile.

Which may explain the small-town ethos that dominates dealings in the Maine legislature.

Lawmakers converge under the elegant, Bulfinch-designed statehouse dome, dressed in suits and L. L. Bean boots, to debate serious issues (welfare reform) and not-so-serious issues (should the whoopie pie be named the state’s official dessert?). And the part-time, citizen legislators do so with an amity and bipartisanship that is remarkable, especially after a bitter 2010 election in which the Senate, the House and the governorship all shifted from longtime Democratic dominance to Republican control.

That kind of cooperativeness has come in handy as legislators have faced the tough fiscal realities of recent years. In January, the Maine legislature debated how to fill a $121 million hole in the fiscal year 2011-2012 Medicaid budget, with the focus on Republican Gov. Paul LePage’s proposal to fill the gap entirely through cuts from the state’s Medicaid programs.

But the dark side of all that chumminess may well be an offhand attitude about ethics rules in state government. Maine ranks 46th and received a failing grade of F and a numerical score of 56 from the State Integrity Investigation, a collaborative project of the Center for Public Integrity, Global Integrity and Public Radio International. Maine was one of eight states to earn a failing grade.

A Maine Center for Public Interest Reporting story in January of this year detailed how, between 2003 and 2010, the state paid almost $235 million to private organizations run by legislative leaders or the spouses of high-level state officials. But because of a loophole in state law, not one penny of that spending was ever disclosed to the public in ethics filings.

One prominent Democratic lawmaker, Joe Brannigan, was asked whether it was a problem that ethics rules did not require him to disclose to the public the almost $100 million in state contracts that went to an organization he served as executive director.

Brannigan replied that his colleagues in the legislature knew about his intersecting personal and private roles, thus providing a check on any potential conflicts. “I think it was well-known,” he said. “Because I’d been here for a long time, I think everybody knew.”

After the story appeared, LePage proposed legislation to close the loophole.

In Maine, no agency oversees the ethics of the scores of top-level state officials, from the governor to department heads, from the attorney general to the state auditor.

While the state’s Commission on Governmental Ethics and Election Practices collects financial disclosure statements from executive branch employees, the commission has never been a cop on the beat, according to Jonathan Wayne, its executive director. A 2009 report by the commission states that Maine is one of 11 states which does not have an independent agency that regulates the professional ethics of the executive branch of government.

That means problems, including possible conflicts of interest, can fall through the cracks.

Maine also has no law to regulate former top state officials moving into the private industries they previously regulated.

A case study occurred in 2007 and 2008 when Maine’s chief utilities regulator, Kurt Adams, negotiated for and ultimately accepted a job offer and “equity units“ (or shares) from a prominent wind-power developer while still head of his agency – and when the developer had business before the commission.

Adams left his job as the head of the state’s Public Utilities Commission in 2008 to work for First Wind. Later, Adams and company officials said that, despite statements First Wind had made in federal filings about when it had granted him the shares, the company had made a mistake and had awarded the securities only after Adams had left the PUC in mid-May.

A subsequent investigation by the state’s attorney general found that Adams had violated no state laws – an illustration of the fact that Maine has no meaningful “revolving door” statutes, said Maine League of Women Voters former president Ann Luther.

“What we don’t seem to have is regulations about people flopping back and forth to jobs in industry,” said Luther. “There’s nothing there, nothing!”

In their disclosure forms, lawmakers and major policy-making officials must list only income, not their full range of assets. That means the value of their homes and investment properties, for example, is not disclosed, nor is their stake in any business.

Also, the income requirement does not ask for precise amounts or even ranges – just a source of any income of $1,000 or more.

That means the public has no way to determine if a legislator, department head, governor or constitutional officer has become wealthy while in office or the extent of conflicts between their private interests and public responsibilities.

Take the 2009 disclosure form for Democratic state Sen. Justin Alfond, a member of one of Maine’s wealthiest and most prominent families.

Alfond’s disclosure is more comprehensive than most, citing the numerous partnerships and investments that provide him with income. But all the reader learns from this statement is the identity of each source of income and that each source represents income of “$1,000 or more.”

The liability side of the standard disclosure form is equally vague, requiring only the listing of “names of creditors for any unsecured loans of $3,000 or more that you received during the reporting period.”

Republican Rep. Kenneth Fletcher’s 2009 disclosure reports such a loan from Preti Flaherty, one of the state’s leading law firms. Anthony Buxton, a senior member of the firm, was the most powerful energy industry lobbyist in Maine, appearing frequently before the Utilities and Energy Committee, on which Fletcher sat as ranking minority member.

Fletcher’s form indicates the loan was in connection with Buxton’s assistance to a non-profit group headed by Fletcher whose goal was to prevent the removal of a dam that created a lake on which Fletcher lived.

Further, the disclosure forms require virtually no investment details. The form filed by Secretary of State Charles Summers, a Republican, for 2010 is illustrative. In the section marked “Other sources of income,” he lists “UBS Financial Services” and the “Kind of Income” as “Investments.” There are no details as to which mutual funds, stocks bonds or companies are included in those investments.

For lobbyists in Maine, it’s a different story.

“Over the last 10 years, the state’s lobbyist-disclosure laws have evolved into some of the most comprehensive in the country,” said Doug Clopp, deputy program director for the open-government group Common Cause in Washington, D.C., and the former Democracy Project coordinator for the Maine Citizen Leadership Fund.

He notes specific requirements for lobbyists to delineate activities between legislative branches, administration officials and constitutional officers are strong. “Given current trends in professional astroturfing, the reporting of expenditures for grassroots lobbying is also noteworthy,” Clopp added.

Clopp also praised the spending reports required for lobbyists in Maine. “They capture the relevant data regarding the purpose and nature of the expenditure,” he said.

Maine legislators are prohibited by law from accepting more than $300 in goods or services from a single source within a calendar year. This seems a high number to some good-government watchdogs, including Clopp.

“Ideally, lobbyists should be barred from giving gifts of any amount, at any time,” he said. “I understand the reality of asking a legislator to lunch to have a discussion about policy, but the limit should be $25.”

The State Integrity Investigation found significant accountability problems in other areas of state government operation and transparency. For example, budget deliberations, the legislature’s most important activity, are tough to monitor, according to veteran observers.

“Only members of the Appropriations Committee are able to spend the time to understand the budget,” said former Sportsman’s Alliance of Maine lobbyist George Smith. “The budget is an insider’s game.”

The lengthy, complex, hard-to-read set of documents is “almost impossible for insiders to figure out,” said Mary Lou Dyer, former labor commissioner and now a lobbyist for Maine Association for Community Service Providers, an amalgam of organizations that provide services to people with intellectual disabilities and autism.

In addition, many budget decisions recently have been made in closed political-party caucuses, according to veteran social-services lobbyist Elizabeth Sweet: “The process has gotten ever more secretive.”

One item in the state budget is – by law – off limits to scrutiny.

Although Maine’s governor earns only $70,000 a year — the lowest governor’s salary in the country — he also gets $30,000 annually in quarterly $7,500 payments in a little-known expense account that he can use at will.

According to Sandra Harper, associate commissioner of the Department of Administrative and Financial Services, “There is no detailed documentation of the expenses.” In fact, the law establishing the account states: “This account shall not be subject to audit, except as to total amount to be paid.”

But an unaudited, undocumented account troubles University of Maine School of Law professor Orlando Delogu. Summarizing several laws, he said, “No elected or appointed official or any employee of government at any level” may use public funds “for his or her personal use or purposes.”

Delogu concluded the governor is subject to these limitations.

While Maine has a strong law ensuring access to public information, sources also said there are substantial problems with that law in practice. The process to appeal a denial of an information request, for example, is expensive and complex.

Judy Meyer is vice president of the Maine Freedom of Information Coalition and managing editor of Lewiston’s Sun Journal. She urged that the survey question ranking the cost of an appeal be scored “Capital ZERO, if you can do that.”

Said Meyer: “There was one guy who spent over a million dollars. You have to hire a lawyer, file a lawsuit and there are very few lawyers in Maine who do this … they’re very expensive. A lot of people don’t appeal because of this. They throw their arms up and say ‘What can I do?’ “

Jeff Inglis, president of the Maine Pro Chapter of the Society of Professional Journalists and managing editor at The Portland Phoenix, said that resolution of an appeal “requires, at minimum, legal threats” and “can take an unspecified amount of time and money.”

Inglis said an aide to former Gov. John Baldacci told him and his publication, “So sue us,” when the Phoenix filed an information request for politically sensitive documents.

A year into the four-year term of Republican Gov. Paul LePage, it appears he is less answerable to the public via the statehouse press corps than recent predecessors.

“He has no regularly scheduled news conference or availability,” said veteran statehouse reporter Mal Leary. “All the governors I have covered held news conferences either on a schedule or held them on an issue basis about once a week.”

Statehouse reporter Susan Cover wrote in the Portland Press Herald in September, 2011 that Gov. LePage “has not publicly released his daily or weekly schedules since he took office in January, breaking with more than 30 years of practice by governors and raising questions about his vow to have a transparent administration.”

Peter Rogers, LePage’s communications director at the time, defended his boss. “Since I have been in the administration the governor has done major press conferences with time allocated for media questions,” Rogers said. “He has also responded to a number of media requests for interviews.”

LePage began issuing weekly schedules to the public in 2012.