Why Louisiana ranked 15th of 50 states 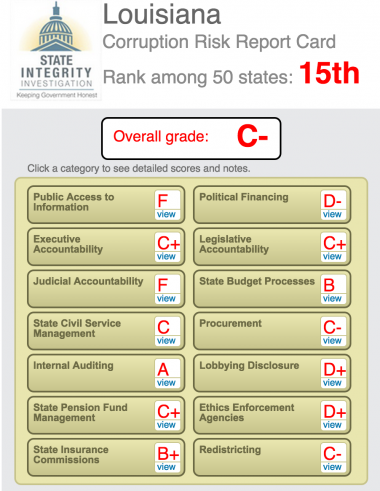 Since its earliest days, Louisiana voters had long accepted, even sometimes reveled in, the colorful doings of their government officials.

During the lifetimes of many living Louisianians, two governors, three insurance commissioners and innumerable lesser officials in state and local government have been convicted of corruption and sentenced to prison. In the past four years, the state has witnessed the investigation, conviction and ongoing appeals of one of its most prominent congressmen, who stored bundles of cash in his freezer.

Part of the state’s identity comes from its association with rascals. Local society columnists noted that the lines to greet former Gov. Edwin W. Edwards, who was released from federal prison in 2011, at Gov. Bobby Jindal’s second inaugural ball in January were longer than the ones to shake hands with the current governor.

From its entrance to the United States in April 1812, the governing structure of the former French and Spanish colonial outpost was organized to allow the chief executive to rely on his political network to fill state government jobs and fill state contracts. Louisiana governors traditionally choose leaders in the Legislature and judiciary. Populist Huey Long, as governor and U.S. senator, is perhaps the best known Louisiana leader who exploited a structure in which strong executive powers allow a leader to dominate all aspects of government.

The unspoken social compact between voters and officials was, in part, that government would deliver jobs and competence, say many scholars of Louisiana politics. That calculus was shattered by the failed responses of city, state and federal authorities after Hurricane Katrina in 2005. Government-built levees broke, flooding New Orleans. Evacuation plans failed, resulting in images of thousands huddled on elevated freeways awaiting evacuation to far-flung locations. Even those who left before the storm ended up living for months in the homes of families and friends across the state and the nation.

Albert Samuels, a political science professor at Southern University in Baton Rouge, and G. Pearson Cross, a political science professor with the University of Louisiana at Lafayette, agreed in two separate interviews that the diaspora, coupled with two decades of a stagnant economy, gave cogency to the argument long voiced by many in the business community, that dramatic changes in ethics laws — along with corporate tax breaks — were needed to “turn Louisiana around.”

And so the Louisiana Legislature in February 2008 approved laws that require nearly every public official in the state to report, on some generalized level, their financial holdings and personal debts. Gov. Bobby Jindal said the state had achieved “the gold standard” of ethics.

Many critics countered that the dazzle of widespread reporting diverted attention from subtle changes to the black letters of statutes that emasculated enforcement of the state’s ethics code.

But those 2008 changes helped place Louisiana 15th out of 50 in the State Integrity Investigation, a collaborative project by the Center for Public Integrity, Global Integrity and Public Radio international. Louisiana earned a C- grade and a numerical score of 72 for the transparency and anti-corruption safeguards it has in place.

The election of 2007 was the first in which term limits barred many experienced lawmakers from running for re-election. It saw a sweep of new legislators with little political experience running on the platform of improving ethics as the key to running government more efficiently and improving the economy.

In his January 2008 inaugural address, Gov. Bobby Jindal vowed to build a state “where our leaders and our people set the highest standards and hold every member of our government accountable.”

Jindal called a special legislative session for February 2008 to consider three dozen bills with about 60 changes to state law. Jindal said the goal was to send a strong message to the business world that Louisiana had cleaned up its act.

During the short session, the Legislature passed a wide array of changes. Lobbyists were required to report their activities more frequently. Lawmakers were limited to accepting about $50 in wining and dining. Strictures were strengthened against government contracts and employment for the families of public officials. Nearly all state and local officials were included in the order to publicly disclose their financial holdings.

Jindal’s chief of staff, Stephen Waguespack recently said of the ethics revamp: “We have turned the Louisiana story around.”

He reiterated that stance as late as January 2012, saying that few alterations were necessary to what Jindal calls the “gold standard.”

Waguespack made his comments against a background of skepticism. Two of the state’s most prominent “good government” research organizations, both of which are funded by the business community, announced efforts to study the increasingly frequent criticisms that the “gold standard” has compromised the enforcement of the state’s ethics laws.

In early March, Jindal followed through on an earlier pledge to push legislation that addresses at least some of the issues raised by the organizations.

Barry Erwin, president of the government policy group Council for a Better Louisiana, said the 2008 laws increased transparency. “Where we have muddied the water is on the enforcement end of it,” he said.

The Public Affairs Research Council of Louisiana, another “good government” policy group, has started an analysis of both ethics law changes that altered the system and rules for adjudicating alleged violations of conflict of interest, nepotism and other laws.

Scott Frazier, who was one of Jindal’s first appointees to the Ethics Board, tapped the table in the meeting room of his Baton Rouge law firm to emphasize each of several legalistic changes that have “fundamentally compromised enforcement.” The two biggest are: requiring more and stronger evidence to prove a violation, which was slipped in during the last couple hours of the 2008 special session; and a shift of duties, which gives the ultimate decision-making power to a group of judges hired by a gubernatorial appointee.

Frazier explained that the Board of Ethics had operated like a regulatory board. It decided if an individual violated one of the many rules that governed the activities of people working with public money. The penalties for, say, failing to file a campaign finance disclosure on time, were usually fines or reprimands. More serious infractions, such as misusing funds, were referred to the district attorney in Baton Rouge.

During the 2008 special session, that structure was changed to make the Board of Ethics operate more like a prosecutor, presenting evidence of misdeeds, and to have a panel of administrative law judges determine “guilt or innocence,” Frazier said. An appointee of the governor selects the panel.

Formerly, the Ethics Board used, as do most regulatory bodies, a “preponderance of evidence” standard because the penalties are mostly monetary. Crimes in which life or prison terms are at stake require a “beyond a reasonable doubt” level of evidence. Louisiana now requires “clear and convincing” evidence, which falls somewhere in between.

To outline that subtlety, consider the case of a fellow who is accused by his wife of hiring some kid to cut the lawn so he can watch a football game. Under a “preponderance of evidence” standard, the wife needs only to show a lack of perspiration on the husband or a warm television set to bolster her allegation. If the lazy husband faces jail time, the wife would need witnesses who testify to seeing someone else mow the lawn. Preferably the hired kid, himself, would testify and confirm seeing the husband watch television. She’d need to prove that a football game was being broadcast during the time in question.

Charles Plattsmier, who uses the poorly defined “clear and convincing standard” to prosecute wayward attorneys for the Louisiana Supreme Court, says there is little difference between “clear and convincing” and “beyond a reasonable doubt.” Before some panels, the State would need the kid to testify, others would be satisfied with a passerby as the witness. But, the level of evidence necessary clearly would be more than a warm television set of the “preponderance of evidence” standard. “You absolutely have to say they have made it more difficult. You have raised the bar on the prosecutor,” Plattsmier said of the legislature’s change in the evidence standard for ethics violations.

Many legislators felt the Ethics Board had been too aggressive in enforcing standards, dragging elected officials through unnecessary reviews that raised questions about their integrity and honesty.

House Speaker Jim Tucker, who sponsored the bill, said separating the prosecutorial functions from the adjudication functions created a more fair environment. “It was the right thing to do,” he said. Jindal agreed, saying at the time too much power had been invested in the Ethics Board, infringing on the due process rights of the accused.

The new enforcement structure has resulted in many legal challenges, most of which have not been decided yet. The only cases that have been concluded are those in which the public official agrees that he or she violated the rules and agrees to the penalty imposed, according to coverage of Ethics Board’s monthly meetings.

In addition to legal issues arising from the enforcement structure, requiring nearly every state and local government official to file disclosures has flooded a staff that can do little more than check to make sure the form is complete.

“We do pretty well with the reporting aspect, but there’s not much oversight to see if things are accurate,” said Council for a Better Louisiana’s Erwin. “It goes hand-in-hand with overall staff and support of the Ethics Board.”

Ethics Board member Scott Schneider said the law should include a mechanism similar to an Internal Revenue Service audit in order to at least sample the contents of some of the filers. “The public thinks there is transparency, but I don’t think there’s anything in place to ensure we are getting accurate information,” said Schneider. Ethics Administrator Kathleen Allen, however, says that if there is question about the accuracy of the information, “It has to be generated by a complaint.”

The number of agency employees has roughly doubled in size to 41 allocated positions since the passage of the legislation in 2008.

Both Allen and Board Chairman Frank Simoneaux have repeatedly said during interviews and testimony before legislative committees that the agency needs more funding and more staff. But a shortfall in revenues, caused largely by tax cuts and the end of federal grants for hurricane recovery, has required state government to cut spending over the past three years.

The new laws on the surface “look really, really good,” said Elliott Stonecipher, of Shreveport, a political adviser to a former Louisiana governor and to several members of the Louisiana Board of Ethics, past and present. The problem is that the state’s new and improved ethics system is “five miles wide and one inch deep,” he said.