Why Kentucky ranked 19th of 50 states 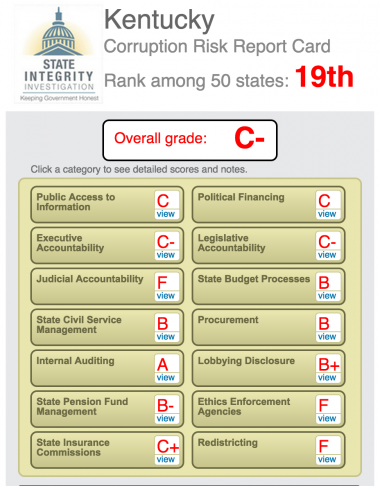 As is often the case with government reform efforts, the Kentucky General Assembly enacted ethics laws in response to an embarrassing scandal.

“BOPTROT” was a federal investigation of the Kentucky legislature in the 1990s, so-named because it involved a powerful legislative committee, Business Organizations and Professions, and horse racing. It exposed 15 state lawmakers who sold their votes, some for as little as $100.

Despite the post-BOPTROT reforms, this state of 4.4 million residents earned a grade of C− and a numerical rating of 71 for how well it ensures accountability in government, according to the State Integrity Investigation, a collaborative project of the Center for Public Integrity, Global Integrity and Public Radio International. Those scores rank Kentucky 19th among the 50 states.

Kentucky prohibits lobbyists from contributing to the campaigns of legislators and legislative candidates though they may contribute to campaigns in statewide races, including the contest for governor.

This can create a disparity between candidates when, as was the case last fall, when a sitting Democratic governor was challenged by the Republican president of the state senate. This race also illustrated another gap.

“Unauthorized campaign committees” can receive large donations and spend huge amounts to support a candidacy as long as they don’t coordinate with the campaign. The father-in-law of Republican candidate David Williams gave $1 million to the Republican Governors Association, which soon after began running commercials supporting Williams and attacking his opponent, Gov. Steve Beshear.

The law also requires candidates for public office to report on who gives them money and how it is spent. The Kentucky Optometric Association paid 14 lobbyists just over $28,000 in February 2011 alone to push for a bill to expand the surgical procedures optometrists are allowed to perform, according to a story in the Louisville Courier-Journal.

The association’s political action committee and its members had given over $400,000 in the past two years to the campaigns of 137 of the 138 members of the legislature and Beshear, the paper reported.

The fact that this aggressive spending was widely reported did not hurt the optometrists’ cause.

Despite vigorous opposition from ophthalmologists (medical doctors who go through residencies and specialized training in addition to medical school) who contend that optometrists don’t have adequate training to conduct the surgical procedures safely, the bill passed rapidly through both houses of the legislature – the first bill to make the complete trip in an otherwise contentious session — and was signed into law by the governor.

There’s no indication that any lobbying or campaign spending laws were violated but the profound impact of money directed from one group advocating a particular, and controversial, change in the law, was clear.

A footnote to the optometrists’ bill illustrates a gap left open in the reform legislation. The optometrists association reported spending $1,416 on an “Optometry Day At the Capitol” lunch for all members of the General Assembly.

Picking up the tab

In an effort to stem the cozy pre-BOPTROT relationships in which lobbyists commonly picked up the tab at restaurants and bars for legislators, lawmakers passed new laws restricting lobbyists from spending more than $100 per year on entertaining an individual legislator. That provision has effectively cut back on many one-to-one meetings fueled by free food and drink.

However, lobbyists still have the opportunity to entertain legislators at events paid for by their employers, as long as they are part of a group, whether it be all members of the legislature, all members of one house, a political party or a committee.

“We get plenty of chances to eat and drink on the dime of these folks,” Sen. Kathy Stein told a reporter for the Lexington Herald-Leader.

Another example of a gaping hole in the walls built between lobbying interests and legislators was reported in 2010. The National Conference of State Legislatures was scheduled to hold its annual meeting in Louisville in the summer of 2010. To defray the costs of hosting the event, the Republican leader of the Senate and the Democratic leader of the House sent a letter to lobbyists and others asking them to contribute up to $75,000 each.

Depending upon the level of sponsorship, the benefits ranged from being mentioned in the program to invitations to special events and priority placement for hospitality suites.

There are separate laws, regulations and commissions overseeing the ethics of each branch of government in Kentucky. Lobbyists must register separately with both the legislative and executive branch ethics commissions. This can cause confusion.

The potential for conflicts between personal financial interests and responsibilities as a legislator or member of the executive branch of government always exists. In Kentucky, again, there are safeguards, but they have significant shortcomings. Office holders must disclose businesses, property, and investments in which they have interests over a certain amount, but that is all. As a result, the public doesn’t know if the interest is worth $10,000 or $100,000 or $10 million.

Rules that are meant to avoid conflicts between a legislator’s private-sector job and duties as a lawmaker are, at best, fuzzy. They’ve allowed coal company executives to chair committees that have oversight over that industry, public university executives to oversee the budget that benefits them and lawmakers to vote on budgets that include millions for construction projects that will benefit their employers.

Kentucky elects its judges, and there is no process across the state for regularly evaluating their performance. In addition, they are rarely opposed for re-election and are even more rarely unseated in an election.

Judges do file disclosure forms but not all their information is open to the public. Complaints about judicial conduct go to the Judicial Conduct Commission, which conducts a preliminary investigation. If it finds sufficient cause, it conducts a hearing at which the judge can respond to the complaint.

If the complaint is not resolved the Commission can file a formal complaint and the matter comes into public view for the first time. Judges are also generally informed of who has made the complaint.

In practice, very few complaints reach the public stage. The public is generally unable to determine if a judge has been privately admonished or reprimanded and whether he or she has chosen not to contest the action. The Commission has only voted to remove a judge from office four times since 1984, the most recent on Sept. 19, 2011.

Scandal in the court

Among the findings of the commission about the circuit judge in that case: he had appointed a special grand jury to investigate the county judge-executive (the elected head of county government in Kentucky) who was opposed in an election by the judge’s cousin; filed a complaint against the local electric utility and then asked the utility to donate $12,500 to a playground fund at the school the judge’s children attended; barred a public defender from his court without a hearing and pushed the county to accept $500,000 for a water park even though judges are not supposed to lobby government entities.

Notably, the state’s attorney did not complain about this action. In an editorial written well over a year before the Commission’s action, relating these facts and calling for an investigation, the Lexington Herald-Leader cited a weakness in the judicial disciplinary process.

“For reasons that are easily understood, lawyers, including prosecutors, are reluctant to criticize judges or challenge them in elections.”

Employment, budgeting and other issues

By most accounts, the state merit system protects workers from political influence.

However, it is not uncommon to see “embedding” of political appointees as an elected official nears the end of his or her term. This process involves moving an employee from a non-merit, political position into a merit position so that he or she will be protected by the merit system when the next elected official enters office.

The processes for creating a state budget and for redistricting are essentially not public. While the budget is proposed publicly by the governor and is subject to hearings in the state House of Representatives, the final process of reconciling the House and Senate versions happens behind closed doors, involving only a few legislators. The final product is voted on so soon after that few if any of those voting have time to digest it. Redistricting happens in a similar way although there’s even less public involvement.

The pension fund has come in for intense scrutiny recently following a highly critical report by the State Auditor.

The report revealed an exceedingly close relationship between a placement agent and the now former chief investment officer. New leadership has adopted policies to provide for greater transparency and create more accountability. Officers of the agency are required to complete the same financial disclosure forms as other members of the executive branch but there is no requirement for them to provide real-time information about their personal investments nor is there any process for examining their personal accounts to monitor any changes in their economic status.

As to more high-level issues, serious questions arose about the separation of powers in 2006.

Then-Chief Justice of the Kentucky Supreme Court Joseph E. Lambert inserted a footnote into a decision that appeared to be unnecessary. It offered some protection for the then-governor, Ernie Fletcher, who was at that time under investigation in a hiring abuse scandal.

It read, in part, “there is a strong argument in favor of barring criminal charges against a sitting executive for actions taken while in office.” The chief justice had contacted the governor asking him to expedite a law that would have benefited the chief justice’s wife, who was seeking re-election as a family court judge.

Later both the chief justice and an associate justice who had worked on the governor’s staff recused themselves from hearing an appeal in the hiring scandal, allowing the governor to appoint temporary replacements for them on the court to hear the case. A commentator wrote that these two, related events “not only left the court’s devotion to fair and impartial justice in question but also eroded the judiciary’s position in regard to separation of powers in state government.”