Grain silo on a wheat field in Kansas. Shutterstock

Why Kansas ranked 10th of 50 states 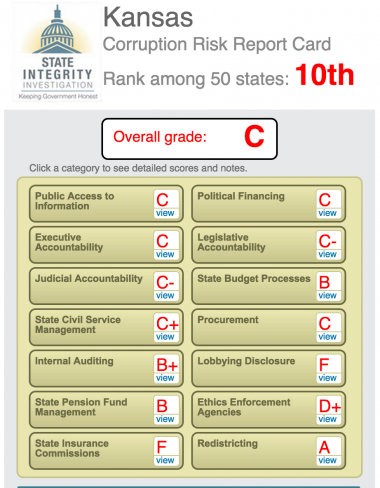 Kansas has a history of enacting major reforms in the wake of scandals. But in the absence of any major uproar, the state is often inclined to leave things as they are, even though there may be significant weaknesses in laws meant to ensure transparency and accountability.

“My sense of Kansas is that by and large, the politics are relatively clean and so the expectation is you don’t have lots of corruption,” said University of Kansas political science professor Burdett Loomis. “But it also means that it’s possible to take advantage of a situation in various ways, in terms of what’s reported and what’s not reported.”

And so even though Kansas ranks relatively high —10th overall out of 50 states — it receives only a grade of C and a numerical score of 75 in the State Integrity Investigation conducted by the Center for Public Integrity, Global Integrity and Public Radio International.

To an outside observer, though, the malfeasance that qualifies as a scandal in Kansas, a state with some 2.9 million residents, may be considered minor compared to scandals in other states.

“If you compare Kansas politics and Missouri politics, it’s not a scandal over there (in Missouri) until somebody goes to jail,” Loomis said, referring to three recent Missouri Speakers of the House. “That just doesn’t happen in Kansas,” he said. “The threshold here is far, far lower. And that’s just the political culture. It’s historically been that way.”

Despite the state’s relatively clean reputation, though, some observers argue there are still significant weaknesses and vulnerabilities in key areas of public access and accountability in state government.

On paper, Kansas has a fairly extensive law, known as the Kansas Open Records Act, or KORA, that is meant to ensure public access to official government records. But enforcement of the measure is left largely to the discretion of the state attorney general and local prosecutors who, according to interviews with researchers and media professionals, may be reluctant to take action. The only other option for citizens seeking records is to file civil lawsuits at their own expense.

“This is one of several ways that KORA works against the best interests of taxpayers and provides government with a way to avoid providing public records,” said Dave Trabert, president of Kansas Policy Institute, a conservative think tank that has published online databases detailing public spending here. “We couldn’t afford the cost of a lawsuit to challenge the State’s refusal to provide information even they acknowledged KORA did not prohibit from being released.”

“Appeals are often to the district or county attorney, who usually rule the right way in the counties with more aggressive newspapers,” Anstaett said. “But in the far-flung reaches of Kansas, the county attorneys prefer not to get involved in these disputes.”

Jeff Wagamon, a spokesman for Kansas Attorney General Derek Schmidt, said that while the statute allows courts to impose civil penalties in cases where a public agency knowingly violates the law, “I do not know of any cases where a court has ordered such civil penalties.”

Kansas is one of only 12 states that still has an elected insurance commissioner. All employees in the Insurance Department serve at the pleasure of the commissioner.

In the early 1990s, the commissioner’s office was rocked by a series of scandals. In 1991, just weeks after retiring, commissioner Fletcher Bell received a $94,469 worker’s compensation award, ostensibly for injuring his back lifting a briefcase out of his car. His deputy and successor, Ron Todd, was caught “double-dipping” – retiring from state service and then immediately coming back to work in order to receive both his salary and retirement benefits simultaneously.

Lawmakers responded to those situations by passing workers compensation reform measures, as well as retirement rules to prevent double-dipping. And voters acted in 1994 by ousting Todd in favor of Democrat Kathleen Sebelius, who had run on a campaign of reform. Sebelius later became governor and then the Obama administration’s Secretary of Health and Human Services. But the Kansas insurance commissioner’s office itself remains political, by definition, and offers the opportunity to award contracts and favors to political supporters.

“I believe senior staff, who have in many cases been with the department through many administrations….interpret state and federal laws affecting the regulation of insurance to the best of their abilities, and that is how they operate on a day-to-day basis,” said one lobbyist who asked to remain anonymous because of ongoing relationships with the agency. “However, the insurance commissioner, who is elected, ultimately makes all final decisions in any regulatory matter. Further, the degree to which the commissioner is subject to partisanship, industry pressure, consumer demand, etc., is reflected by staff. So the degree to which staff is protected from interference … is really a function of the leadership of the commissioner,” the lobbyist said.

KU political science professor Loomis went further, arguing that the commissioner’s job should no longer be an elected position.

“If you want a structural reform of government in Kansas, I would argue taking both the state treasurer [also elected] and especially the insurance commissioner out of elective politics,” Loomis said.

Kansas statutes require lobbyists to register with the Secretary of State’s office and to file periodic disclosure statements detailing how much they spend in the course of lobbying, including food and drink they buy for individual legislators. But beyond that, there is little lobbyist disclosure in Kansas, and the requirements that do exist contain hefty exceptions.

“Those are only a small portion of all the money that’s spent,” said Martin Hawver, publisher of the political insider’s newsletter, Hawver’s Capitol Report. He noted, for example, that lobbyists often host receptions for large groups of legislators – inviting the entire House or Senate, or the Republican or Democratic caucuses of either chamber – and only have to report the total amount spent on such events, without allocating the cost to those who attend.

The law also does not require disclosure of how much corporations and interest groups spend employing the lobbyists, which Loomis of KU called an even greater shortcoming.

“You don’t see how much they’re spending on the talent that’s hired to influence legislation,” Loomis said.

The Kansas Public Employees Retirement System (KPERS) was established in 1961 as a “defined benefit” plan for state and municipal employees. Employees contribute a percentage of their salary, which is matched by contributions from the employer. Upon retirement, vested members receive a lifetime benefit based on a percentage of their final average salary and their years of service.

In 1970, legislation was passed to expand the system by absorbing local school employees who until then had been covered under a separate plan.

The fund is governed by a nine-member Board of Trustees. Some of the members are appointed by the governor or legislative leaders. Others are elected by various groups of KPERS members. The Board contracts with investment managers to manage the fund’s assets.

Over the past several decades, the system has faced a number of thorny issues:

The program was soon plagued by conflicts of interest as investments were directed toward businesses in which members of the KPERS Board of Trustees had personal financial interests. Chief among those was a $65 million equity investment in Home Savings Association, a thrift institution that collapsed in 1991. Mike Russell, who served on the KPERS Board, also served on the Home Savings board of directors.
A detailed account of the investment scandal, and the litigation that followed, is provided in a decision by the 8th U.S. Circuit Court of Appeals affirming a lower court ruling that the defendants could not be sued because the statute of limitations had expired.

Various accounts put losses through the direct placement program as low as $265 million and as high as $524 million. KPERS recovered only a small fraction of that through litigation.

Kansas lawmakers responded to that scandal with legislative reforms, including requirements that KPERS trustees disclose their outside interests, prohibiting trustees from having a financial interest in any fund in which KPERS invests, and barring them from going to work for such a firm within two years after leaving the KPERS Board.

Also in response, the legislature acted in 1992 to form a standing Joint Committee on Pensions, Investments and Benefits to conduct oversight of KPERS.

“I think there were enough things put into the statute to keep that from happening again,” said Jack Hawn, a retired senior administrator at KPERS.

In 1993, two years after the collapse of Home Savings Association, lawmakers approved a benefit increase, raising the “multiplier” used to calculate payments by more than 16 percent, applied retroactively to all KPERS members, regardless of how much they had been contributing prior to that time.

Over time, that decision created a substantial unfunded liability in KPERS – the gap between the actuarial value of assets and the future liability for service already earned. The problem was compounded with investment losses after the 2008 stock market crash.

In December 2011, KPERS estimated the 40-year unfunded liability in KPERS at $8.3 billion out of a $12 billion fund. The funded ratio of the system – the ratio of assets to future liabilities – is only 62 percent.

Lawmakers have done little in the ensuing years to address the problem.

The legislature’s response last year was to pass a bill providing increased employer contributions in future years, coupled with an option for some employees to increase their contributions in exchange for enhanced benefits. The bill also established a special study commission to recommend other long-term changes to KPERS, including the option of converting it to a 401(k)-style “defined contribution” plan. Meanwhile, the changes in benefits and contributions can only go into effect if the 2012 legislature acts on the recommendations of that commission.

One of the first major scandals to afflict the state in the post World War II era was the infamous “Triple Play” that brought about an overhaul of the judicial branch and the method of selecting judges, especially those on the Supreme Court and, later, Court of Appeals.

In 1956, according to a summary by the Kansas State Historical Society, incumbent Gov. Fred Hall ran for re-election but lost in the Republican primary. He saw a chance to retain a powerful position when state Supreme Court Chief Justice William Smith resigned due to ill health. On Jan. 3, 1957 – just before his term was to expire – Hall resigned as governor, elevating Lt. Gov. John McCuish to the office of governor. McCuish, who served only 11 days, immediately appointed Hall to the vacant Supreme Court position.

While perfectly legal at the time, it was viewed by many as highly unethical, and led to adoption the following year of a constitutional amendment providing for a merit selection process for Supreme Court justices. That process was later extended to the Court of Appeals, but has not been fully extended to district courts, where voters in each of the judicial districts have been allowed to decide whether to retain popular elections of judges or move to a merit selection process.

The system is modeled after what is commonly known as the “Missouri Plan” for merit selection. Under the plan, a non-partisan nominating commission accepts applications or nominations for open seats on the bench and submits the names of three nominees to the governor for appointment. In Kansas, however, there is no review or confirmation of the governor’s appointments.

The merit selection process has come under criticism from some academics and conservative pundits because it gives the Kansas bar majority control over the nominating commissions. In recent years there have been legislative attempts to require the governor’s judicial appointees to be confirmed by the Senate, but those have not passed.