One of the historic covered bridges of Madison County, Iowa. Shutterstock

Why Iowa ranked 7th of 50 states 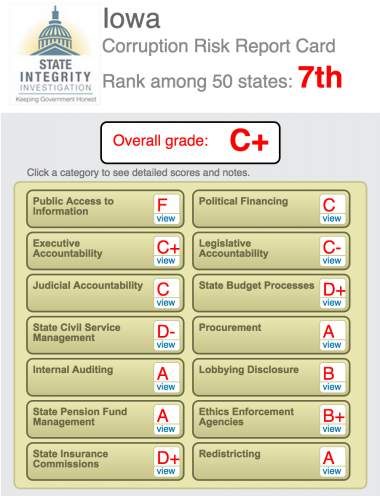 In substance, however, that’s not the case. The Iowa code carries 65 exemptions in the public records law, all of them added over time.

That section is the longest, most detailed and substantive part of that chapter of the code.

Even with the exemptions, enforcement is rare when violations occur, and the obstacles citizens confront when appealing a denial are considerable, Reed notes.

Reed, an editor and reporter for 41 years, did a package of stories for The Gazette in March 2011 examining Iowa public records law and practices. He was manager of investigative and enterprise content for SourceMedia, the Gazette’s parent organization, until he left in December.

Iowa public officials have created a government that keeps a sizable portion of its operations shut off from public scrutiny, according to a comprehensive study of government openness and susceptibility to corruption by a team of 13 journalists working for IowaWatch.org, the news website of The Iowa Center for Public Affairs Journalism, and The Gazette.

This report is part of the State Integrity Investigation, a collaborative project of the Center for Public Integrity, Global Integrity and Public Radio International.

Using a list of 330 indicators of vulnerability to corruption and the same detailed criteria to guide their scoring decisions, dozens of reporters from the nation’s 50 states delved deep into the laws and practices in 14 segments of governmental operations. The Gazette and IowaWatch.org in Iowa City teamed up to cover Iowa.

The project employs a method to systematically gauge governments’ vulnerability and to allow comparisons among states. To examine these practices, project managers provided reporters with specific criteria to use in scoring the indicators of corruptibility.

Iowa, with 3 million residents, scored well on laws dealing with openness and vulnerability to corruption but not so well when it comes to open records.

Of the state’s 14 governmental operations, only its nonpartisan, professionally developed decennial redistricting system scored a perfect 100. The executive branch, which includes the office of the governor and its departments, scored 81 points, while the state’s internal auditing process and the state pension fund management each received high scores for transparency.

Public records not so public

Iowa’s public records law and practices came in last among the state’s 14 operations with a score of 47 – giving it an F for that category. Two of four indicator questions about laws drew negative answers.

“We respectfully disagree with the premise by you and/or the report that Iowa’s ‘right of access to information is ineffective’,” Greenwood said.

Recently, signs of discontent with government secrecy emerged. About two-thirds of the respondents in a September 2011 poll commissioned by the Iowa Freedom of Information Council and released in late January believe government should be more open in making records available and holding meetings. The same percentage believes the Legislature should create a board to enforce the public records and public meetings laws.

The 2012 Legislature is considering such a measure, SF 430, which would create an independent executive branch agency with a full-time attorney and advisory board. The Senate has already passed it, and the House government committee approved it last week 20-3, setting the stage for a possible floor vote this week.

Greenwood said the attorney general’s office is “neutral”on the bill.

State Rep. Vickie Lensing, D-Iowa City, who favored a different version that would have made the agency part of the Iowa Ethics and Campaign Disclosure Board, said Friday she would support the bill if assured the new agency would be put where its independence from other offices could be assured.

Lensing said she was not surprised at Iowa’s low score and national ranking in the State Integrity Investigation Report.

Already loaded with exemptions, Iowa’s law gives citizens almost no help when government denies their records request. A state ombudsman can investigate denials of records requests, but the office has no power to force compliance.

The percentage of citizens who experience unreasonable delays is unquantifiable. The data is not reported by any agency.

Lensing and Greenwood said they are aware of only a few complaints from citizens over the past several years. Lensing said most complaints she hears come from news organizations.

“There’s a whole sea of frustration in Iowa from citizens trying to get access to the information they need.” he said during comments to a senate panel on Feb. 24, 2011. “Iowans still wonder why officials still say ‘no’ to them when they ask for documents.”

The state attorney general has the power to investigate and prosecute or take civil action for public records violations, but rarely does. The office usually relies on phone-call persuasion, Assistant Attorney General John McCormally said in an interview last fall.

“Sometimes we think, ‘Boy, a district court action, which is what this is, is such a big stick, and our office in particular carries such clout, maybe there’s a better way to solve this than filing action in district court.’”

Citizens who have been denied access to records have no recourse except the courts, because the attorney general and county attorneys don’t enforce the law, said Kathleen Richardson, director of Drake University’s School of Journalism and Mass Communication and executive secretary of the Iowa Freedom of Information Council. That’s an expensive proposition, she added.

No state or local agency is responsible for monitoring compliance with the records law, she wrote in an email.

Greenwood argues there is enforcement and describes Richardson’s statement to the contrary as “disappointing” and a “blanket claim.” He says the attorney general’s office has taken a few enforcement actions over the past several years through legally binding “assurance of voluntary compliance” agreements.

He said his office and has worked with the Iowa Ombudsman’s office to resolve complaints informally.

The state’s civil service management system did a little better than its public records regime, but not much.

If state employees uncover wrongdoing, they have no access to a hotline, email address or other means to report corruption. Caleb Hunter, spokesperson for the Department of Administration, said Friday such a system would not be opposed in his office, but he said it was matter for the governor or legislature.

The government is still defending itself against a suit by 6,000 African-American job applicants or employees alleging the state failed to hire or promote them despite their strong qualifications.

The administration of Gov. Terry Branstad has acknowledged problems in hiring practices occurred in past administrations. Also, between 2000 and 2006, the state paid about $850,000 to nine people who claimed discrimination.

Branstad also hasn’t hesitated to appoint his favorites to career positions. Hunter defended the action, saying, “The governor can hire people he trusts and believes in.” He says they also go through a legislative confirmation process.

When Branstad took office, he followed recent tradition and asked for the resignation of 30 department heads. One of those, Chris Godfrey, Iowa’s workers’ compensation commissioner, refused to quit.

In summer 2011, the governor slashed his pay by $36,000. In January 2012, Godfrey sued for $1 million, alleging harassment, defamation, extortion and sexual discrimination. (He is openly gay.) Branstad’s office has denied discriminating against Godfrey, saying his job performance prompted the action. The case is pending.

The Iowa judiciary scored a middling 76 points for openness. That may come as a surprise to many in the court system.

For decades, the Iowa judiciary has enjoyed a reputation as one of the most progressive in the country, having returned numerous cutting-edge decisions ranging from granting civil rights to African Americans decades ago to marriage rights to same-sex couples in 2009. In 2010, Iowa voters decided the state Supreme Court had gone too far with its unanimous ruling on same-sex marriage. When three of the justices had to stand for election in November under Iowa’s retention system, voters booted them.

The judiciary gets low marks for the formal evaluation of judges, online availability of court documents and certain auditing practices.

Rebecca Coulton, a spokeswoman for the Iowa Judicial Branch, said Friday Iowa doesn’t give access to evaluations because a systematic evaluation process is not in place. “The idea has been considered, but right now, there is no formal proposal to evaluate judges,” she said.

But it gets high marks because the system is transparent and accountable in the selection of judges, disciplinary actions and judicial conduct.

Judges and justices are nominated by the State Judicial Nominating Commission, which consists of equal numbers of lawyers and non-lawyers. After their first term, they seek election through a retention vote.

The judiciary’s overall score in the study suffered, because it does not provide online access to all court records, evaluations of judges and material about a judge’s assets. Pilot projects for providing all records online are under way in three counties – Plymouth, Story and Sioux. But completion of efforts to convert Iowa courts to a paperless system is not imminent, Coulton said.

The State Court Administrator’s Office checks to ensure all judges file an annual disclosure statement, but state law doesn’t provide a process for routine audits of the statements.

Lobbyists generally have enviable access to the halls of power, and disclosure requirements earn this area of oversight 85 points.

But requiring more detailed and regular lobbying reports would help show whether Iowa lobbyists are adhering to ethical and legal requirements.

Iowa Code has a broad definition of “lobbyist” and requires annual registration for paid lobbyists and state employees who lobby on behalf of their agency. Both legislative and executive branch lobbyists are included in state requirements.

In 2010, the legislature released lobbyists from a requirement to file annual compensation reports. Now the reporting is left mostly to the clients, who must report how much they spend, including payments to lobbyists. However, these reports are only filed once a year and do not itemize the payments.

Lobbyist reports are not audited regularly, but House and Senate ethics committees may ask for an audit if they decide to investigate a lobbyist.

The state House’s chief clerk and the Senate secretary review them for completeness and timeliness but don’t investigate the payments by requiring receipts and other supporting documents.

The budget process is among the most difficult to understand, earning it 67 points. In April 2010, a Public Interest Research Group (PIRG) national study of online access to state budget processes gave Iowa and 17 other states an F.

Part of the problem is the format used.

Although citizens can examine the budget online, its format isn’t comprehensive, lacks consistency from year to year and makes searching for items cumbersome. The state legislature last spring passed a law to put the budget into a searchable database.

David Roederer, director of Iowa’s Department of Management, said the project is underway, and that it will be an ongoing process as it is updated and upgraded.

He said the budget can be confusing, because the legislature does not have a consistent budget pattern from year to year or from one fund to another.

Iowa does a little better in providing public access during the budget-making process.

The governor’s office conducts public hearings to develop the budget proposal. Although budget hearings are sparsely attended, the public has online access to their schedules.

The Legislature also has access to a bipartisan Fiscal Committee of legislators and is supposed to track spending. But it has met only once since 2007. The Fiscal Services Division of the Legislative Services Agency, however, completes numerous reports on state funding and makes them available to the committee.