A view of the city of Chicago, Illinois. Shutterstock

Why Illinois ranked 11th of 50 states 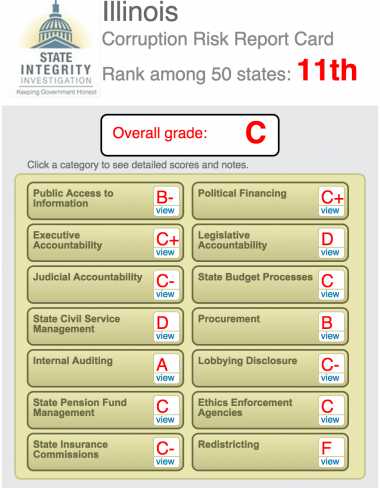 When Rod Blagojevich became governor of Illinois in January 2003, he used his inaugural address to make a promise: “I will govern as a reformer.”

Instead, was forced out of office in January 2009, disgraced.

Only the latest in a series of criminal state politicians, Blagojevich was convicted on 17 counts, including attempted extortion, extortion conspiracy, bribery conspiracy, and ten counts of wire fraud. His crimes include trying to shake down a children’s hospital CEO and a racetrack executive in exchange for campaign cash and, most infamously, attempting to sell President Barack Obama’s vacated U.S. Senate seat. As federal prisoner 40892-424, Blagojevich will serve a prison sentence of 14 years – double his time as Illinois’ chief executive.

Underscoring the state’s troubled ethical legacy, Blagojevich, a Democrat, is the fourth of the last nine governors of this state of 12.9 million residents sentenced to prison. His predecessor, George Ryan Sr., a Republican, is nearing the end of his six-year stint in the Terre Haute, Ind. penitentiary.

Each of these lapses, though, brought some reforms, which explains why Illinois received a grade of C and a numerical score of 74 from the State Integrity Investigation, a collaboration of the Center for Public Integrity, Global Integrity and Public Radio International. Those scores ranked Illinois 11th among the 50 states.

Taken together, these reforms – including new campaign finance limits, an overhaul of state procurement rules, the creation of a path to recall a misbehaving governor, and changes to the state’s budgeting and planning procedures — amount to substantive change.

But in some ways, they are like nips and tucks — cosmetic facelifts that conceal a host of ethical loopholes. Despite wide knowledge of its crooked history, Illinois remains a state where lobbyists do not have to disclose their fees, where legislators cannot be sanctioned for conflicts of interest, and where the judges who make it on the bench are those with the best political connections.

In a study released on Feb. 15 by the University of Illinois at Chicago and the University of Illinois Institute for Government and Public Affairs —which ranked the per capita number of government appointees, employees, and others convicted of public corruption— Illinois came in a dismal second among states, behind Louisiana (the District of Columbia was the worst). According to the report, since 1976, the state tally of convictions is 1,828 – or around 51 per year; “at the heart of most convictions,” the study said, “is a payoff for something that is a sweetheart contract or a law or permit necessary to do business.”

A tradition of corrupt rewards

Gov. Ryan’s tenure fit within the Illinois tradition of making backroom deals sealed with greasy palms. He rewarded friends and supporters with state jobs and contracts, and leveraged his office to obtain vacations, money and political favors. A jury convicted him of 18 felony counts in 2006.

Blagojevich was elected on the heels of the Ryan scandal partly by promising a new era of integrity. He made splashes with a repeated vow to “rock the (campaign finance) system.” But critics note it was a charade – no changes in the system passed during his tenure.

After Blagojevich’s impeachment and removal from office, Illinois lawmakers passed a series of measures meant to revive the public’s shaken confidence, including a constitutional amendment allowing voters to recall a sitting governor. They tightened the rules governing state contracting procurement, while increasing oversight and increasing the transparency of purchasing decisions. The aim was to block future pay-to-play schemes.

Also, political committees that once had to file their reports of receipts and expenditures every six months now have to do it quarterly. Candidates must tell the State Board of Elections about any contribution of at least $1000 within five days; if the election is less than a month away, then the notification for those larger contributions must occur within two days.

It was these limits that helped elevate Illinois’ score on financial disclosures to 79, well above the average in the State Integrity Investigation. But the 2012 election cycle is the first time they are being put to the test, so whether they will effectively limit the influence of money is yet to be determined.

Illinois Campaign for Political Reform Deputy Director David Morrison is proud of the limits, and lauds them as historic. But he fears there is a loophole in the reporting requirements. While Illinois used to “define when a contribution was received as the date on which a committee actually received the money,” a receipt is now defined as when a check is deposited in the bank, he said.

“Our concern is … the checks don’t count until you deposit them. Our fear is that committees will receive money and sit on it for weeks, then deposit the check,” he said. Candidates who receive a major contribution before an election can spend money in anticipation of making a deposit later, Morrison said, adding that there would be no way to know about the contribution until the candidate actually makes the deposit.

The law also sets no limits on contributions by a corporation’s affiliates, leaving room for corporations to “duplicate themselves indefinitely” and then keep on giving, Morrison said. He cites an example of two hypothetical dry-cleaning operations. One, a single shop with one owner, would have to respect the $10,000 limit for corporate donations to a candidate. But a second operation with three individually incorporated stores could give three times as much, even if they share a single owner.

The law requires ten members of the Illinois Senate and 20 from the House, with no more than half of the signatures coming from one party in each chamber, to sign off on the recall initiative, and gives a citizen or group 150 days to collect signatures from the public. The total must be 15 percent of the total number of votes in the last election for governor, and they must come from at least 25 counties. All of that’s just to get the recall initiative on the ballot, so the question of whether a governor should get to retain his post midterm can be presented to voters statewide.

Emily Miller, the policy and government affairs coordinator of The Better Government Association, a nonprofit group, said as a result, no governor will ever be recalled in Illinois. “For all of the talk” of reform, she said, “there is a really high bar to get anywhere close” to removing one from office.

Furthermore, recall is limited only to the governor. Unlike other states, legislators did not give voters any means of recalling General Assembly members or other elected officials.

While Illinois received high marks in the State Integrity Investigation for requiring members of the legislature, as well as of the executive and judicial branches and certain senior officials, to file financial disclosures, those statements reveal little about their financial assets and interests.

The problem is particularly acute when lawmakers – who officially serve part-time — have other jobs. That list includes the longtime Speaker of the Illinois House, Mike Madigan, a partner at a successful property tax law firm.

One section of the economic interest form, for example, calls on members of the General Assembly to “list the nature of professional services rendered (other than to the State of Illinois) of each entity from which income exceeding $5,000 was received for professional services rendered.” Madigan responded in his 2011 declaration that he and his firm provided “legal services for various individuals, partnerships and corporations,” but did not divulge any client names.

Legislators themselves are responsible for deciding if they have a conflict that would make it wise to abstain from voting on a particular issue. Madigan, for example, voted “present” instead of becoming involved in negotiations over tax legislation last year meant to induce the Chicago Mercantile Exchange and Sears to keep their headquarters in Illinois.Madigan has never said if he stepped out of that discussion because he or his firm did legal work for the financial exchange.

These problems explain why Chicago Tribune Bureau Chief Ray Long calls the forms “none” statements, noting that the most common answer to questions is frequently “N/A” for non/applicable. Though he has occasionally used them to help his reporting, Long said they are mostly useless. Morrison calls the form “crap.”

State statutes include a separate set of “Rules of Conduct for Legislators”and “Ethical Principles” that are supposed to govern lawmakers’ conduct.

The Ethical Principles, for example, state that “where feasible, and taking into account the fact that legislative service is part-time, a legislator should avoid accepting or retaining an economic opportunity which presents a substantial threat to his independence of judgment.”

However Legislative Inspector General Tom Homer said there is no penalty for violations. Homer has called on the General Assembly to promptly clarify the Code of Conduct, and attach consequences for defiance. He also supports “more thorough” asset disclosure forms.

“Members should be required to report, in my view, not only their own outside business interests, but those of their spouse and family members,” Homer said.

Further, no entity is responsible for auditing the disclosure statements, for any branch or unit of state government. The Secretary of State’s office acts as a depository, Homer said, but not as a guard.

While several agencies have the authority to investigate reports of unethical behavior, Miller notes that the key investigators are chosen by the very individuals they are charged with monitoring – the governor chooses the Executive Inspector General, for instance, who oversees the Governor’s office and the agencies under the Governor’s authority. The legislature likewise picked Homer as its ethics watchdog.

Ethics in the Future

There has, nonetheless, been progress in Illinois. Lawmakers’ offices once doubled as virtual campaign headquarters; now legislative aides leave their offices and step off the capital complex to discuss campaign business on their personal cellphones. Inspectors charged with monitoring ethics also can accept anonymous tips, or start probes on their own.

After promising continued ethics reforms, Gov. Pat Quinn marked President Abraham Lincoln’s 203rd birthday this year by proposing to amend the state constitution so voters can directly enact ethics changes. His proposal would allow ballot initiatives about campaign finance, conflict-of-interest and pay-to-play to become law. However, since its introduction, there has been no action on the plan and some prognosticators say the chances of amending the constitution are slim.

The lesson of Illinois’ history so far appears to be that a politician who is motivated more by graft than ethical principles can find a way. Sen. Jeff Schoenberg (D-Evanston), the sponsor of the procurement and purchasing overhaul law, has remarked on the special challenges: “Whenever there is a lot of cheese out there,” he said, “you have to build bigger and better mousetraps.”