Why Hawaii ranked 13th of 50 states 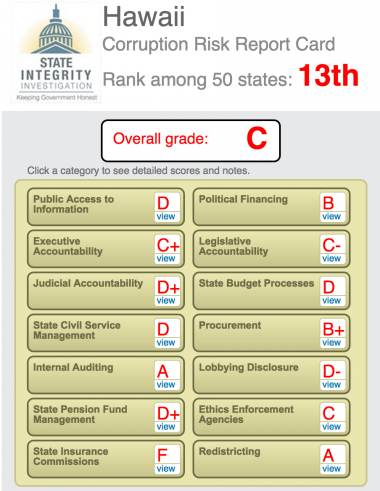 For years Hawaiian state lawmakers have enjoyed lavish spreads at receptions hosted by groups with business before the legislature. No harm, no foul, right?

In the Aloha State, when big feeds and free drinks are involved, controversy is close behind. There’s a new ethics sheriff in town — and he’s stirred up controversy with his view that lawmakers have no business accepting freebies without a “state benefit.” In other words, it’s fine to attend educational events for free, but not to accept gifts of tickets to events that are primarily social, with open bars and fancy appetizers.

During his yearlong tenure as Executive Director of the Hawaii State Ethics Commission, Les Kondo has drawn a hard line on accepting meals and gifts as well as disclosing financial interests and lobbying by legislative task force members.

“I think there are a lot of people at this point that don’t appreciate that we are here and part of the team,” Kondo said.

He has his work cut out in this state of 1.4 million residents. Hawaii ranked 13th with a grade of C and a score of 74 from the State Integrity Investigation, a collaborative project of the Center for Public Integrity, Global Integrity and Public Radio International.

Kondo’s aggressive enforcement of the state ethics law has infuriated some lawmakers. So it came as little surprise when the 2012 legislative session began that Kondo — and ethics — were in the crosshairs.

In many ways, the legislature’s struggle with Kondo reflects Hawaii’s ongoing problems with government transparency.

Hawaii has laws on public access, ethics and financial disclosures intended to encourage transparency. But there are also traditions that are hard to change — and respect for personal privacy is a deep part of the local culture, which is heavily influenced by Asian values. A majority of Hawaii residents are at least part Asian.

While Hawaii has largely been scandal free at the state level for the past few years, the debate over ethics has heated up. Free tickets to charitable events is one hot-button issue. Another is whether members of state task forces can lobby the legislature on the same subject. For example, during the 2011 session, members of a mortgage foreclosure task force provided significant input for a reform bill, then lobbied lawmakers on that same topic. The Ethics Commission found that members may have violated the ethics code in doing so.

Any attempt to tighten rules or add enforcement inevitably runs into a financial wall. There’s no money to pay for new initiatives, with lawmakers last year having to make up a $1.3 billion shortfall. While Hawaii has relatively low unemployment, at 6.6 percent, the state’s cost of living is high, and the local economy is heavily dependent on two sources: tourism and the federal government.

What the State Integrity Invetigation found was a mixed bag. On the one hand, Hawaii boasts a strong independent state auditor, Marion Higa. The auditor has the power to issue subpoenas and her reports are taken seriously. Higa’s independence from political interference is bolstered by high barriers to her dismissal — removal requires a two-thirds vote by the state legislature.

On the other hand, interviews with state officials showed that while Hawaii has what appear to be strong mandates to help state employees identify and avoid conflicts of interest, many of them often don’t know who is responsible for making sure rules are followed or even what the rules entail.

Inquiries to different agencies about how ethics and financial disclosure statutes applied to their offices were often met by confusion. Factual questions about whether department officials were required to file financial disclosures and whether those filings were publicly available took days to answer. In some cases, departments declined to answer questions and instead referred reporters to the Hawaii State Ethics Commission.

Hawaii has an office dedicated to administering the state’s public records law, which grants citizens access to many government documents. But the Office of Information Practices lacks teeth. It can’t force government agencies to release public records.

Even the state’s chief executive ignores the open-records office. In 2011, Gov. Neil Abercrombie refused to release names of nominees for the Hawaii Supreme Court, citing possible problems in attracting potential judicial candidates. He declined despite a contrary opinion by OIP. Abercrombie went so far as to fire the office’s director, Cathy Takase, although he said his decision had nothing to do with her opinion.

The Honolulu Star-Advertiser sued Abercrombie for the list of nominees and he lost in court. The state Judicial Selection Commission eventually made his decision moot by changing its policy and releasing the names of all prospective judges it supplies to the governor.

Identifying conflicts of interest is another consistent problem for Hawaii.

State law requires that all state employees follow fair treatment and conflict-of -interest rules. State Rep. Karl Rhoads, chair of the House Labor and Public Employment Committee, said lawmakers generally cast votes on everything, and judge for themselves whether a conflict is involved. When they ask for a ruling by the speaker or Senate president, they’re invariably told “no conflict.”

State Rep. Joe Souki worked a side job as a lobbyist for the American Chemistry Council while also voting against a fee for single-use checkout bags. And in October 2009 he told the Maui County Council’s Infrastructure Management Committee that replacing styrofoam with a natural sugar-based material would not solve solid waste problems and would add cost for Maui retailers, according to meeting minutes.

Souki made clear that he was testifying not as a lawmaker but as a citizen and as a lobbyist for the American Chemistry Council. Later in the same meeting, Council member Michael Molina asked a styrofoam manufacturer if council members might be able to visit the company’s Oahu production plant when they fly over “to network with our legislators like Mr. Souki.”

House Speaker Calvin Say defended his decision to allow Souki to vote on the bill. “Just because he represents that company does not mean he cannot vote up or down on the measure,” he said.

Hawaii consistently falls short in monitoring the financial disclosures of lobbyists and state employees. Even in sectors where corruption and graft have historically been found — such as lobbying and state procurement — the state has no additional layers of oversight to identify potential problems.

“In terms of examining whether there’s a conflict of interest, it’s very difficult,” said Kondo, the ethics commission’s executive director. “In part, it’s because of a manpower issue. But I think the bigger challenge would be — even if we had double the staff, it would be very difficult for us to identify conflicts.”

The commission isn’t intimately familiar with an employee’s duties beyond their job title, nor could it be expected to know whether a spouse’s job creates a conflict, Kondo says. In that regard, the commission often relies on the public’s help to spot problems.

The ethics commission receives more than 1,800 financial disclosures each year. Honolulu Civil Beat reported that approximately 160 of those are public. The rest are confidential. The commission may scan the forms to make sure they are filled out correctly, but it doesn’t have the staff to check each one for discrepancies.

Respondents are often confused in regard to what information they’re required to report about their financial holdings. Among recent problems: The governor’s nominee to direct the state Department of Land and Natural Resources, William Aila, turned in his financial disclosure form more than a month late. Some state lawmakers made their own estimates of the value of real estate they owned that were not consistent with public records. Other lawmakers left out details in their reports.

In one case, Sen. Clayton Hee submitted an incomplete disclosure statement and later had to revise it following media reports pointing out inaccuracies.

Hee shouldn’t have gotten away without facing a penalty, says Ian Lind, veteran blogger and former director of Common Cause Hawaii. “The problem here is when presented with a case with a relatively flagrant violation, the commission needs to step up and take enforcement [action].”

Gifts to lawmakers have been a major issue over the past year. State law requires that legislators must disclose any gift or gifts exceeding $200 in value from one source. They are not allowed to accept gifts meant to influence or reward them. But there’s no enforcement without a complaint first.

Two dozen members last year accepted Blu-ray DVDs valued at $360 each from Relativity Media, a company seeking more generous tax credits for filming in Hawaii, without reporting them. One lawmaker even accepted an iPad valued at $500 from the company.

“I took it as a good gesture, not as a payment,” Rep. Mele Carroll told Civil Beat. She later returned the device after the ethics commission informed her that the gift was not acceptable.

Yet amid the ethics violations are clear signs that lawmakers are getting the message.

In December 2011, several legislators turned away bottles of wine given by a solar-energy company as a holiday gift, prompting the firm to take back all of the bottles and issue an apology to the recipients.

In 2011, the legislature considered a new gifts bill. The measure started out as good-government legislation, a comprehensive reform of existing ethics rules. But opponents gutted the measure and rewrote it, loosening gift laws to the point that government officials would have had virtual carte blanche — including opportunities to accept unlimited gifts of food and drink as well as expensive travel offers that were banned under the old rules.

Kondo’s ethics commission stepped in with a strong warning, saying that the measure would have allowed lawmakers and employees to accept gifts from unions, lobbyists, and others trying to influence a vote. Yet legislators still sought to keep it alive, going so far as to expand the definition of charitable entity to include labor unions and business leagues so that they could accept free tickets to events.

In the end, the bill died, with no resolution on the core issues.

Arguably as important as gifts —but further under the radar—are post-employment restrictions on government employees and elected officials.

State law prohibits former state lawmakers and former state employees (except judges and justices who are covered under the judicial rules) from representing “any person or business for a fee or other consideration” on matters they were involved within 12 months after leaving government.

Rhoads said most people abide by the rule, but it is hard to know for sure. He added a year may not be long enough, but it would be almost impossible to monitor and very difficult to enforce even with an extended limit.