With an F, the Peach State receives the lowest score in the U.S., a 49 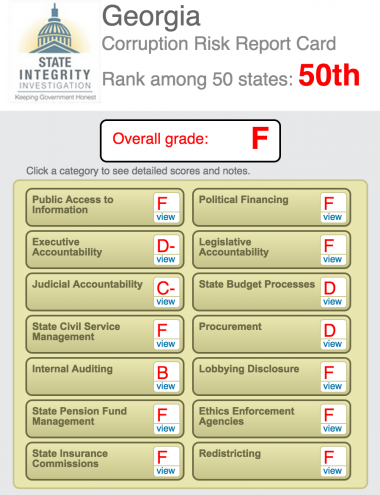 So utilities and insurance companies can’t give to a candidate seeking an office that regulates them. Legislators can’t take political donations while in session. Politicians can’t use campaign money for personal benefit. State workers can’t accept gifts from vendors or lobbyists.

Except when they can.

Time and again, Georgia journalists and watchdog groups have found that money finds a way to flow around those laws:

Some 658 state workers accepted sports tickets, speaking fees, fancy meals and other gratuities over a two-year span. It’s been 12 years since the state last fined a vendor for failing to disclose such gifts.

Political action committees set up by governors and legislative leaders collect hundreds of thousands of dollars in amounts and at times forbidden for other contributions. Two officials dumped $1 million of campaign money into PACs where they could spend it almost any way they wished. “It’s ripe for the opportunity for corruption,” former ethics enforcer Rick Thompson said.

Collectively, executives of insurance companies, public utilities and other regulated entities have become the largest single source of campaign money for regulators running for re-election. Utility officials raise money and work to help re-elect incumbents; a lobbyist for the cable TV industry managed one incumbent’s campaign in 2008.

These and similar findings underscore what can sometimes be a gaping divide between Georgia’s legal standards for public accountability, on the one hand, and everyday practice. Georgia ranks 50th with a grade of F and a numerical score of 49 from the State Integrity Investigation, a collaborative project of the Center for Public Integrity, Global Integrity and Public Radio International. No state received an A.

News reports and advocacy group have long made Georgians aware of this accountability gap. In fact, as one political family’s history shows, the 9.8 million residents of this state have had a long and often forgiving familiarity with dishonest politicians.

Eugene Talmadge, a populist caught misusing public funds as agriculture commissioner, famously told voters in 1931, “Sure I stole, but I stole for you.” He was re-elected and later won four terms as governor. Fifteen years later, when it appeared Talmadge might die before beginning a final term, supporters stuffed ballot boxes with fraudulent write-in votes so his son Herman could take office in his father’s place. Later forced to give up the job, Herman Talmadge easily won election two years later and served 30 years as governor and U.S. senator. And, after the U.S. Senate censured the younger Talmadge for taking more than $40,000 in bogus expense reimbursements, Georgia Democrats still re-nominated him despite stiff primary challenges.

Ethics ‘was our core creed … until we took over’

Georgia Democrats, who’d controlled the governor’s mansion and the Legislature since the 19th century, were slow to embrace ethics reforms in the post-Watergate era. The Republican minority pushed with limited success to address ethics abuses that many regarded as inherent in one-party rule.

Yet in 2003, when the GOP took the governorship and state Senate for the first time since Reconstruction, ethics reform still took a back seat.

“Ethics was part of our core creed for 30 years,” former House GOP leader Bob Irvin said in 2010 testimony before a legislative ethics panel. “It was our core creed, it seems, until we took over.”

Republican Gov. Sonny Perdue needed two years to get a watered-down ethics bill through the Legislature, which rejected his proposals to ban gifts to state workers, define acceptable campaign spending and stiffen penalties for violators. Perdue imposed the gift ban with an executive order that could be rescinded by a future governor.

Also by executive order, Perdue created an Office of Inspector General to investigate wrongdoing, but its recommendations are advisory only. The Inspector General has no jurisdiction over departments run by constitutional officers — insurance, education, labor, agriculture, law, utility regulators and the secretary of state. Over eight years, the office’s budget has been cut nearly in half.

The Judicial Qualifications Commission forced at least 21 judges to step down since 2008, but kept its doors open only because its investigator and contract attorneys worked without payment.

Spending cuts prompted the Georgia Government Transparency and Campaign Finance Commission to eliminate nearly all its investigative jobs and focus on clerical duties as the repository of financial disclosures from candidates and lobbyists. Ultimately, the agency’s top two staffers were forced out in June 2011 just as they were seeking subpoenas for campaign and personal records of newly elected Gov. Nathan Deal; commission members said the timing was coincidental.

The commission’s downsized oversight of campaign financing dovetails with the vision of House Speaker David Ralston, author of the state’s 2010 ethics law. Ralston advocates transparency — rather than regulation — to allow the public to police campaign finance excesses.

“When [voters] are given information about contributions or expenditures … in a very open and transparent way,” he said in 2010, “I trust the judgment of the people as to where the limits ought to be.”

Between loopholes and ineffective enforcement of disclosure laws, that promise of transparency has frequently proven to be an empty one.

The 60,000 to 70,000 disclosures filed with the commission each year are rarely if ever audited, so candidates, lobbyists and donors face little or no consequence for submitting incorrect or incomplete information.

About 2,000 Georgia officials, including one in five sitting legislators, have failed to pay penalties for filing their disclosures late, or not at all.

The commission, unlike other state regulatory agencies, can’t make its own rules since lawmakers stripped it of that power in 2009. Since then, the commission has been powerless to revise or repeal old rules to reflect new laws or court decisions. That paralysis forced the commission in 2010 to advise an independent political committee that it could hide the identities of its donors.

Such obstacles make it doubly difficult for the public to monitor officials’ performance.

With a few exceptions, only elected officials and state department heads must file public disclosures of their financial interests. State law in 2011 dropped that requirement for members of most state boards, commissions and authorities, some of which oversee billion-dollar budgets. Now those board members operate under an honor system, submitting an affidavit each year to confirm that their public actions have not affected their private financial interests.

The governor and other statewide candidates disclose less financial information once they’ve taken office than they did before. If they don’t seek re-election, they need not disclose anything about their financial interests for their final two years in office.

Only statewide office-seekers must reveal any business they’ve had with lobbyists or their clients. Legislators — who generally are much more likely to be lobbied — do not.

Legislative leaders with statewide power — such as the House speaker and Senate president — disclose much less than officials elected statewide. (The lieutenant governor — who’s become little more than a figurehead these days — must disclose as much as the governor does.) Legislators also need not disclose their major sources of income if they are lawyers, consultants or otherwise self-employed.

Elsewhere in state government, officials often can conduct the people’s business with little or no meaningful oversight.

Banking regulators continue to operate in secret, even as Georgia leads the nation in bank failures, at a cost of more than $9 billion to the FDIC.

Investigations of judicial misconduct remain under wraps even after they are closed, so the public often has only the murkiest notion of why a judge might have resigned under pressure.

State law requires no asset disclosures of key upper-level workers handling public money, including pension investment advisors and top procurement officials. Those workers must recuse themselves if they have a conflict.

Inconsistent enforcement of Georgia’s open records law can also block citizens’ access to information. Compliance is only monitored by an informal mediation in the Attorney General’s Office, where effectiveness is generally “hit or miss.”

The Open Records Act also exempts the legislative and judicial arms of state government. Each tends to comply with requests for administrative information but has also cited the exemption in refusing to produce other records.

Legislative leaders have trumpeted the need for increased transparency while presiding over a process that effectively denies a seat at the table to members of the minority party. In the Senate, the Republican Caucus meets privately to decide on virtually every bill the full chamber will consider.

House budget writers make major spending and cutting decisions behind closed doors with little subsequent public debate. Sponsors of pork-barrel spending may be identified only on the whim of the Appropriations committee chairmen.

More than a dozen Democratic lawmakers have switched parties in the last decade, often proclaiming the move was their only chance to influence public policy.

Legislators also reserve the right to police themselves in ethics matters, accepting complaints only if the complainant has direct knowledge of alleged misconduct. Investigative findings remain confidential under House and Senate rules.

Most lawmakers have also been loath to further rein in the influence of campaign donations, leaving plenty of mechanisms to raise and use large sums of money without technically breaking the rules. Often, these loopholes allow practices that mock the spirit of campaign finance laws.

Both major political parties use so-called “multicandidate mailings” to spend unlimited sums in support of a single candidate. Using this technique, the parties can spend tens of thousands of dollars above the legal limit for one candidate simply by listing a second candidate’s name in the fine print.

State law also still allows candidates to transfer campaign money to political action committees for which spending is largely unregulated. After ex-Speaker Glenn Richardson did so in 2010 with $220,000 in political donations, he was fined $500 for neglecting to organize the PAC as a non-profit first.

The circumstances of Richardson’s departure in late 2009 seemed to create a climate favorable to ethics reform. The speaker stepped down under mounting pressure from a number of allegations, including his ex-wife’s disclosure of his intimate relationship with a female lobbyist whose bill he was backing.

An ethics bill already in the hopper had attracted broad bipartisan support with 41 co-sponsors – nearly half the number needed to pass it through the House. The measure would have lowered contribution limits, limited lobbyists’ gifts to legislators and capped the aggregate amount that candidates may transfer to other campaigns or political organizations.

The bill never even got a hearing. Instead, Speaker Ralston drafted a bill to increase lobbyists’ disclosures, stiffen some penalties for violators and add sexual harassment and a narrow definition of conflicts of interest to legislators’ code of conduct.

Ralston’s bill was introduced as the House ethics reform package for 2010, sweeping aside the earlier bill. Parliamentary procedures were used, as they were again when the law was further revised in 2011, so the language could not be amended.

Asked about the other ethics bill, Ralston said his bill adequately addressed the issues raised in the Richardson scandal.

“It was my view,” he said, “that campaign finance was not part of that problem.”

Leaving the campaign finance laws untouched also allowed Ralston and other legislative leaders to keep spending campaign contributions to maintain power within their own party.

Party leaders in the Legislature often collect hundreds of thousands of dollars in campaign money from special-interest groups. Since those leaders generally draw no electoral opposition, they donate much of that cash to colleagues’ campaigns, cementing relationships that help them remain in leadership.

“It’s power to them,” one legislator said. “They spread it around like manure.”