Why Florida ranked 18th of 50 states 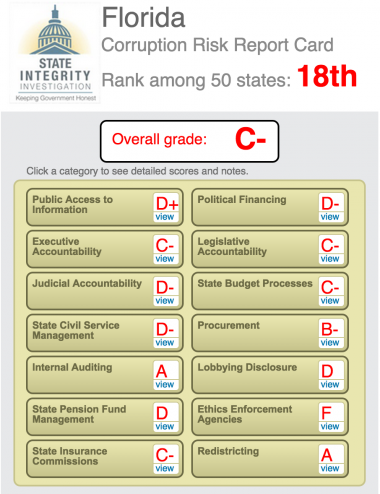 Florida kicked off the modern era of open government reforms when it became the first state to pass an open meetings law in 1967. Today, Florida’s Sunshine Law, and its even older Public Records Law, are among the strongest in the nation.

But while Florida lets plenty of sun shine in on public meetings and records, it has done a poor job of illuminating the activities of lobbyists. Most states and the federal government require registered lobbyists to make public what issues or actions they seek to influence. Florida does not. Lobbyists dealing with the executive branch aren’t even required to report what agencies they are lobbying.

The mixed assessment is reflected in the Sunshine state’s grades from the State Integrity Investigation, a collaborative project of the Center for Public Integrity, Global Integrity and Public Radio International. Florida, a state of 19 million residents, receives a grade of C- and a numerical score of 71, ranking it 18th among the states.

In Florida, lobbying firms are required to file quarterly compensation reports that identify their clients and state how much they are paid – but disclosure is limited to broad dollar ranges. Federal lobbyists are required to report an exact figure.

Compensation reports were enacted, but expenditure reports were repealed, after the law was changed in 2005 to ban gifts to lawmakers from lobbyists, following a scandal.

Lobbyist compensation reports may be lacking, but they are accessible online. The information they contain about lobbyists and their principals is formatted and available for download without cost.

Unlike some of its municipalities, notably Broward County, Florida does not disclose lobbyist contacts with legislators or agency staff. Florida also has not followed the lead of states like Nevada, which publishes a Facebook-style lobbyist list.

The rules for reporting are weak, but a deeper flaw is that the law requires so few people to register and report at all, according to Philip Claypool, the former longtime executive director and general counsel for the Florida Commission on Ethics.

The state definition of executive lobbyist has as many holes as “Swiss cheese,” he said.

Florida law defines a lobbyist to include “a person who is principally employed for governmental affairs by another person or governmental entity.” That seems to exempt corporate employees, said Edwin Bender, executive director of the nonprofit and nonpartisan National Institute on Money in State Politics.

Large governments within the state also exploit loopholes to avoid the registration and disclosure requirements in Florida’s lobbyist regulations.

Florida’s five regional water management districts manage water quality and flood control. They award tens of millions of dollars in annual contracts. But lobbyists who seek to influence those deals are not required to register or disclose who hired them or how much they are being paid.

The districts contend that as independent taxing districts they are not covered by lobbying rules that govern other state agencies.

A lack of enforcement

Enforcement of state lobbying disclosure requirements – such as they are – is minimal. Florida requires lobbying firms and principals to preserve their accounts and records for four years to substantiate compensation for possible audit. Audits, however, are virtually non-existent.

“The law contemplates audits, but they are not done,” said Claypool. He explained that the high cost of audits and the unwillingness of private accountants to do the limited audits contemplated by the Legislature combined to kill the idea.

Claypool and Bender explained that when irregularities are found, which isn’t often, it is the Legislature that investigates.

“The process is cumbersome,” said Claypool. “Investigations are initiated by sworn complaint and if a committee finds a violation it can recommend a penalty of not more than $5,000, a reprimand or a prohibition on lobbying not to exceed two years. Any penalty is subject to a majority vote of the House or Senate.”

Florida agencies that enforce ethical standards for public officials – the Commission on Ethics and the Judicial Qualifications Commission (JQC) – are weak, too.

The Ethics Commission, which investigates misbehavior, has no power to initiate investigations. It can only respond to sworn complaints on an approved form, Claypool said.

The Judicial Qualifications Commission has the authority to launch an inquiry of a judge, but rarely does so on its own initiative, according to its longtime executive director Brooke Kennerly. Both commissions can only recommend penalties – to the governor and the Supreme Court, respectively.

Florida’s Statewide Grand Jury issued a corruption report in December 2010 that was critical of the Ethics Commissions’ civil fine structure – saying its $10,000 maximum penalty was inadequate.

“We find the Legislature should increase the cap to $100,000 as it would be more of a deterrent and more justly set apart the violations based on severity. We point out that the Commission on Ethics has no enforcement authority and that it goes to the Governor to be enforced,” the report reads.

But Tallahassee attorney Mark Herron, who represents public officials accused of ethics violations, attributed the criticism to a general misunderstanding of the commission’s role.

“I can understand where the grand jury is coming from, but by the same token there are things called ‘crimes.’ Things related to administrative rules and the ethics code are for the most part not crimes,” said Herron. “Getting whacked for $10,000 and being branded as an unethical guy, is that significant?”

While the two commissions are ostensibly independent, each is undermined by structural deficiency. The nine Ethics Commission members are political appointees of the governor, House speaker and Senate president. The JQC is dominated by appointed judges and lawyers – a structure the 34-year-old nonpartisan, nonprofit public interest group HALT has criticized as an “insular” system in which “litigants are reluctant to file ethics complaints” because “the oversight system itself is controlled by judges.”

As for gifts to public officials, Florida regulations are generally tough, but tempered by both limitations and exceptions.

State law, for example, prohibits elected officials, candidates and employees from soliciting or accepting “anything of value…based upon any understanding that (their) vote, official action or judgment” would be influenced.

But the law also says that individuals required to file financial disclosure statements, and state procurement employees, may accept a gift from a lobbyist so long as it is worth $100 or less.

“So you can take $100 worth of stuff every day,” said Herron. “Under state law, these public officials have no obligation to inform the public that they have received these gifts. The lobbyist is supposed to make a report of any gift given in excess of $25, but less than $100, but most of the time they don’t do that report.”

State legislators face a broader general prohibition, and can’t take any gift from a lobbyist, except flowers “displayed in chambers on the opening day of a regular session.” Judicial rules say judges are not supposed to accept gifts and are also obliged to discourage family members from accepting them.

But exceptions are written into the law when lobbying is kept all in the family. An all-expense paid vacation, for example, provided by relatives, is perfectly fine, even if the relatives are also lobbyists.

In Florida, a relative is defined to include everyone from a parent to a step-great-grandchild, or even a fiancé.

It is the strength of Florida’s open records law that makes the lobbying rules seem that much weaker.

The right of Florida’s citizens to access such government records is rooted in the state’s constitution, state statutes and legislative and judicial rules. No state agencies or officials are exempt, although there are certain statutory exemptions regarding items like trade secrets or active law enforcement investigations. In a disturbing trend, however, the Legislature adds more specific exemptions to the list every year.

There are other problems, especially when it comes to the cost of electronic records.

In addition to copying charges, agencies are allowed to assess extensive user fees from those who seek information about their government. Fees are charged for clerical and supervisory personnel, as well as “information technology resources” used to search or build databases.

“That’s where we are really seeing a lot of push back at the agency level, mostly related to electronic records,” said James Rhea, former director of the Tallahassee-based First Amendment Foundation. “We are seeing people who don’t get what they ask for because of cost…It’s a growing problem in Florida” that has not been adequately addressed by the legislature.

“So much depends on the type of computer system the agencies have,” Gleason said. “Ask for emails in one jurisdiction and you might be charged $25. In another because a computer system is out of date, it might be $200.”

She added that it’s helpful for the public to tailor their requests in order to narrow agency search time and limit the fees they will be charged.

Costs also can ramp up quickly if a citizen must go to court to force an agency to release public records. But there is redress. Under Florida statute 119.12, agencies that refuse to produce a public record can be ordered by a judge to pay a requestor’s attorneys’ fees and costs.

“I tell government agencies: You lose. You pay,” said Gleason.