Rep. Goode’s legislation would mandate one year ‘cooling off’ period 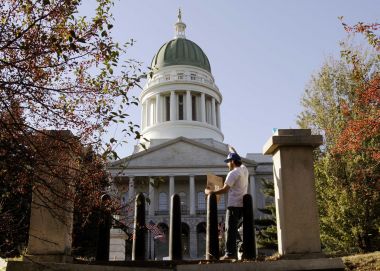 Legislation to make it unlawful for state officials to leave their jobs and immediately go to work for industries they regulated – the so-called “revolving door” – is one of several ethics bills expected to be debated in the Maine legislature this session.

Rep. Adam Goode, D-Bangor, has sponsored legislation requiring executive employees “in a major policy-influencing position” to wait one year before accepting a job with “a business activity that is regulated by the state or quasi-state agency by which the former executive employee was employed.”

Goode said he decided to sponsor the legislation after reading the State Integrity Investigation last spring, which gave Maine an “F” for its weak anti-corruption measures. Among the problems described in the report: Maine had no laws regulating revolving door employment for executive branch officials.

The project’s Maine story cited a case in 2007-2008, when the state’s chief utilities regulator, Kurt Adams, negotiated for and ultimately accepted a job offer and “equity units,” or shares, from a prominent wind power developer while still head of his agency – and when the developer had business before the agency.

Adams left his job as the head of the state’s Public Utilities Commission in May, 2008 to work for First Wind. Later, Adams and company officials said that despite statements First Wind had made in federal filings about when it had granted him the shares, the company had made a mistake and had granted the securities only after Adams had left the PUC in mid-May.

A subsequent investigation by the state’s attorney general found that Adams had violated no state laws.

The prospects are fading for comprehensive ethics legislation during the first half of the two-year legislative session — a promise held out by leading lawmakers after publication of the ethics report.

“The budget’s going to take a lot of the air out of the room,” said Michael Cianchette, Gov. Paul LePage’s legal counsel. “I think obviously there’s a lot of challenges facing the state right now and while this is certainly important, the nature of the fiscal reality of the state has taken most people’s attention. It’s much more of a crisis.”

The State Integrity Investigation, was based on research into 14 categories, from procurement to campaign disclosure to lobbying. No state got an A, leading the report’s sponsors to conclude that “statehouses remain ripe for self dealing and corruption.”

Goode said stories about the report led him to introduce his bill.

“I’m not a big person for putting in a lot of bills,” said Goode. “But I felt reading that story, I wouldn’t want the legislature to project that image.”

In response to the report, both LePage and then-Rep. Emily Cain, D-Orono, vowed to pursue omnibus ethics reform.

Now, said Cain, who was elected to the Senate last November, “I think it would be a mistake to try to do everything at once, because I believe we would end up settling for less and have a less in-depth conversation.”

Cain wants, instead, to focus during this part of the session on legislative and executive branch financial disclosure, conflicts of interest and “transparency” —public access to the workings of government.

“To me, the best approach is to pick a handful of very clear opportunities to make improvements,” said Cain. “Over the next year, I hope to raise the level of conversation … so that we’re not just having a conversation about fixing a problem, but how can we do this better?”

LePage has scaled back his reform ambitions to “something manageable,” according to Cianchette.

The focus will be on expanding financial disclosure for legislators and executive branch employees so that ownership interests are disclosed as well as specific ranges of income.

The purpose of that kind of expanded disclosure, said Cianchette, is to allow citizens to scrutinize the finances of officials and “make informed decisions about the way their personal holdings influence political votes.”

Cianchette said that the limited approach makes sense because, despite the “F” in the national survey, Maine’s not plagued by corruption.

“For the most part, Maine’s still Maine and people know what’s going on and there haven’t been massive scandals like in other states when it comes to this type of disclosure,” said Cianchette.

The groups that sponsored the study explained why states like Maine, not known for corruption, got bad grades.

The study “does not rely on a simple tally of scandals. Rather, it measures the strength of laws and practices that encourage openness and deter corruption… States with well-known scandals often have the tough laws and enforcement that bring them to light. ‘Quiet’ states may be at a higher risk, with few means to surface corrupt practices.”

“Our bill will require electronic filing of disclosure statements,” said Cianchette. “Not a chicken scratch.”

Electronic filing would allow the public to digitally search the forms.

Both Cianchette and Cain said they wanted to work together to ensure bipartisan support for the ethics reform bills. Cianchette said he expected that Cain would sponsor the governor’s bill.