The coastline at the entrance of Delaware Bay. Shutterstock

Why Delaware ranked 22nd of 50 states 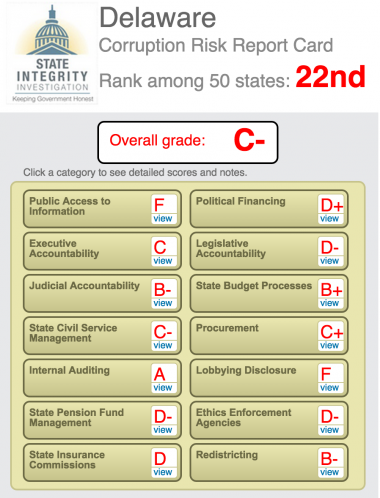 As the second smallest state in size, Delaware is a place where you can see your congressman whacking golf balls at a local driving range or pedaling a stationary bike at a gym. But when it comes to transparency and anti-corruption practices in the state government, residents are often kept in the dark.

According to the State Integrity Investigation, a collaborative project by the Center for Public Integrity, Global Integrity and Public Radio international, Delaware came in 22nd out of 50 states in terms of transparency and accountability in state government. Ineffective reform efforts, cozy relationships between politicians and business elites and a lack of openness helped earn Delaware a C- grade and a numerical score of 70.

Lawmakers and the political and corporate elite often brag about the Delaware Way of solving problems in a nonpartisan, collaborative way. That same Delaware Way, however, also tends to maintain a status quo because power is concentrated in the hands of a core group of politicians who sometimes stay in office for decades, and business executives in banking, development and other major industries.

That’s the way things have always worked in the nation’s second smallest state, situated halfway between New York City and Washington on the Interstate 95 corridor, where people joke that there’s only “two degrees of separation’’ between residents.

Anybody who goes to the YMCA in Wilmington or suburban Brandywine Hundred can catch U.S. Sen. Tom Carper pedaling furiously on a stationary bike. Before he became vice president, then-U.S. Sen. Joe Biden could often be seen practicing on the driving range at Wilmington golf courses.

While there’s a familiarity among residents and their leaders, commoners have long complained that they get shut out of the legislative process or are given lip service and ignored. The state of just over 900,000 people is dominated by Democrats, who hold a 112,000 registration advantage over Republicans. Democrats have held the governorship since 1993, and now control both chambers of the General Assembly.

Many complain that the corporate elite exert far too much influence on campaigns and policy and keeps newcomers from challenging lawmakers for their posts. For example, Terry Spence, a former Republican Speaker of the House, served in that post two decades, and like most incumbents often had no opponent.

Spence is now a lobbyist, typical in a state with no policy forbidding the revolving door. Long after they leave office, former lawmakers who were courted by and supported industry, often for decades, turn around and work for those companies that once supported their campaigns, where they serve to influence the newest generation of representatives and senators.

Along with Spence, other lawmakers-turned lobbyists include former Rep. Roger Roy, who was co-chairman of the Bond Bill Committee that allocates hundreds of millions of construction dollars annually, and former Rep. Bill Oberle, a former majority leader who oversaw the House gaming panel. Former House Majority Leader Wayne Smith is also a frequent visitor with lawmakers in his role as president of the Delaware Healthcare Association, which represents hospitals.

Liquor exec and the governor

The Delaware General Assembly meets in Legislative Hall, a sprawling brick building with towering white columns. Inside, lobbyists, their corporate bosses and lawmakers can be seen mingling in the nooks and crannies of the building. Or they gather at the aptly named Lobby House restaurant, a short walk away.

But if the public wants to know more about their communications or relationships, they are often out of luck. Among the reasons why:

Not only are lobbyists granted wide latitude by the lawmakers they wine and dine, a 2010 report by The News Journal also revealed that in 2007 one liquor industry executive with interest in several bills flew then-Gov. Ruth Ann Minner in a private jet to Canada for a government leadership conference. The executive didn’t register as a lobbyist or disclose the expense, but said in court papers in an unrelated case that he considered the cost a business expense because he used the trip to lobby for the company’s interests.

Minner did not report the flight on her disclosure filing, even though the flight reportedly cost $18,000 and included only liquor executive Christopher Tigani, another liquor lobbyist, Minner and her security detail. Minner later told the newspaper she didn’t report the gift because her share of the cost didn’t exceed $250, the threshold for financial disclosure for top state officials.

Tigani has since pleaded guilty in federal court to campaign finance violations for reimbursing his employees for contributions he ordered them to make.

The Tigani plane trip and his felony plea “put an exclamation point on the need for reform but changes should be thoughtful, measured and responsible,’’ said Brian Selander, spokesman for Gov. Jack Markell.

In the State Integrity Investigation, Delaware received solid scores for budgeting, auditing and judicial accountability, among others, but it continues to score poorly in areas such as ethics enforcement and legislative accountability. While the state recently revamped its freedom of information laws to provide for speedy appeals and copying costs, it took years to before the lawmakers made changes for which advocates and residents clamored.

For example, it took several years before certain legislative committees were opened to public scrutiny, and the late Senate President Pro Tem Thurman Adams freely used what became known as the “desk drawer veto’’ for bills he opposed, sending them to his own Executive Committee, where he would kill them without a public hearing.

Concerns that oversight of the medical community was lax went unaddressed for years, until 2010, when a pediatrician was charged with raping more than 100 young girls, including babies, and the Wilmington newspaper found that complaints about the doctor had gone nowhere for more than a decade. After those embarrassing disclosures, lawmakers moved swiftly to strengthen medical oversight.

Beyond reform being sluggish, oversight is often lax.

The state’s Public Integrity Commission, which is responsible for enforcing ethics rules for about 48,000 state government employees and appointees, is staffed by a skeleton two-person crew. Its budget of $30,600, laments attorney Janet Wright, one of the two employees, is “less than a penny a person.’’

Campaign spending, while governed by strict donation limits, also goes largely unregulated. Candidates for office don’t get their disclosure forms audited, and the elections commissioner doesn’t investigate improprieties. Her office merely checks the forms for completeness, and can levy fines of $50 a month for late reports, Ginger Gibson, a former statehouse reporter for the News Journal in Wilmington, said she cannot recall any such fines ever being levied

Despite the somewhat grudging acceptance by lawmakers and lobbyists alike that the old Delaware Way will change, debate is already underway about just what should occur.

John Flaherty, former Common Cause lobbyist and reform advocate, thinks lobbyists should emulate him and work to influence lawmaking without spending money. Widespread support for a ban or limits on spending appears nonexistent, however.

Instead, “full disclosure” is the prevailing mantra, with many calling for top state officials to disclose whatever lobbyists must reveal. Currently, lobbyists must disclose the identity of recipients of all gifts worth more than $50 in a single day, while top state officials including lawmakers, cabinet members, division directors and judges who file financial reports only have to disclose gifts worth more than $250.

“Lobbyists should disclose everything, just not the ‘per-day’ spending over $50, Flaherty said. “Everything should be down to zero.”

Currently, the only way to know how much lobbyists spend and whom they spend more than $50-per-day on is to visit the Public Integrity Commission office in Dover and inspect the quarterly lobbying reports, or view them on the independent panel’s website.

Indeed, it wasn’t until 2007, after The News Journal persuaded the Attorney General’s Office to order the commission to turn over a copy of its lobbying database, that the public got its first comprehensive look at all spending by lobbyists, companies, lawmakers and other top officials. The newspaper took the data and created an online searchable database at its website, www.delawareonline.com, so its readers could see who was wooing whom.

In addition, the paper published a three-part series on lobbying, reporting that, over the previous 4.5 years, “a total of $471,200 – nearly two-thirds – was spent on public officials who did not have to be identified.” In addition, “Lobbyists paid another quarter-million dollars during the 4 1/2-year period ending June 30 for individual gifts greater than $50,” the paper wrote.

So what did lobbyists do?

In the next fiscal year, the paper later reported, spending “dropped sharply for gifts where they had to identify the recipient. But spending rose for meals and parties those officials could attend without being identified.”

In the wake of the newspaper’s exposes, several reform proposals were bandied about.

Legislation was introduced that would require a one-year cooling-off period before former lawmakers could lobby their old colleagues, but it never came up for a vote.

Another banned gifts from lobbyists, but the initiative drew no support.

A third bill, by Rep. Greg Lavelle, would have forced officials to report all gifts worth more than $50 — instead of $250— to match the lobbyists’ reporting threshold. It never got out of committee.

‘Disclosure is the key’

Though previous attempts to reform lobbying laws have died a quick death in the General Assembly, Delaware’s current speaker of the House pledged in October that changes will be made in the 2012 legislative season to increase lobbying transparency in Delaware and tighten loopholes.

“We’re going to address the issue and I expect something will pass,” House Speaker Bob Gilligan, a veteran Delaware lawmaker, insisted. “What will pass, what it will be, I don’t know.’’

Lavelle, a Republican, agrees with Democratic Gilligan that it’s time to finally reform the system. He agreed there should be “cooling-off period’’ before lawmakers can lobby.

State law requires a two-year cooling-off period before other state employees can assist any private business with matters they have been involved with as a state worker.