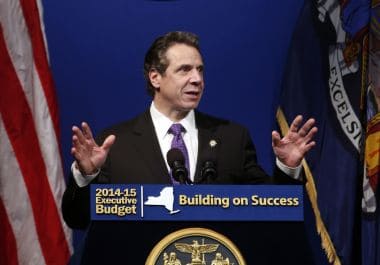 New York Gov. Andrew Cuomo thrust ethics and campaign finance reforms to the top of his legislative agenda yesterday by including the controversial subjects in his 2014 budget proposal. The Empire state had ranked poorly in a national review of ethics and transparency laws by the State Integrity Investigation.

In a speech to the Legislature, Cuomo said the state has become a model for progress in policy areas from education to health care, but that a wave of public corruption cases threatens to undermine those efforts.

Cuomo called for a host of changes to address the challenge, including public financing for elections, more robust disclosure of outside income for lawmakers and stronger criminal statutes covering public corruption. He said lawmakers must adopt a zero tolerance policy.

“What ethics reform says to the people of this state is, ‘I get it. I get that that’s wrong,’” he said.

New York officials — legislators in particular — have been the focus in a rash of criminal cases and corruption scandals in recent years, covering everything from embezzlement to bribery to sexual harassment. Lawmakers have shown particular acumen using charitable organizations in schemes to bilk public funds, as the Center reported last year.

The state earned an overall grade of D from the State Integrity Investigation, a project of the Center for Public Integrity, Global Integrity and Public Radio International. New York received Fs in four of fourteen categories, including ethics enforcement agencies (and, ironically, for its budget process).

This isn’t the first time Cuomo has pushed for reforms. In 2011, the governor succeeded in winning passage of an overhaul of the state’s ethics commission. Despite some early criticism, good-government groups have praised the new panel as a major improvement over its predecessor.

Cuomo first proposed many of the changes included in this year’s budget as part of an anti-corruption package he announced in June. When those proposals went nowhere, Cuomo appointed a special commission to investigate corruption in the legislature and examine the state’s campaign finance and lobbying laws, a move some lawmakers said was an abuse of the governor’s powers. In December, the commission issued a sharp rebuke of the legislature and the laws, saying it had found “deplorable conduct, some of it perfectly legal yet profoundly wrong; some of it potentially illegal.”

According to the report, one in eleven lawmakers to leave the legislature since 1999 have done so “under the cloud of ethical or criminal violations.”

But Cuomo’s inclusion of the reform proposals in the budget raises the stakes, said Susan Lerner, executive director of the advocacy group Common Cause New York.

“This is big news,” she said. Lerner had high praise for Cuomo’s campaign finance proposals, which include new limits on donations and a public financing system based on New York City’s, which matches donations up to $175 6-to-1. While Cuomo and lawmakers have proposed some of the changes before, their introduction generally came late in the session, after a budget had passed, when they had little chance for success. Lerner said their inclusion in the budget, along with a growing call for change from the public, will make it hard for Senate Republicans to oppose the measure. “It becomes I think more and more difficult for the Republicans to say, oh well, we’re not going to do anything.”

Senate Republicans, who control the upper chamber with a faction of independent Democrats, have not supported previous efforts to reform the state’s campaign finance laws. Last year, Senate GOP leader Dean Skelos gave an interview in which he expressed doubts about public financing, saying he was skeptical people would want to devote their taxes to help pay for “robocalls.” Democrats control the Assembly and have pledged support for campaign finance reform in the past.

Skelos did not immediately return a request for comment for this story.

Cuomo, who has already raised $33 million for his re-election bid this fall, said in his speech on Tuesday that it was “inarguable but that the amount of money in politics has created a number of difficult issues.”

He waited until the end of his address to raise ethics and campaign finance, framing it as the last piece of a grand puzzle to remake New York politics. Looking back over his three years in office, he told the Legislature they all had much to be proud of, with one exception. “The one omission,” he said, “is ethics.”