Why Connecticut ranked 2nd of 50 states 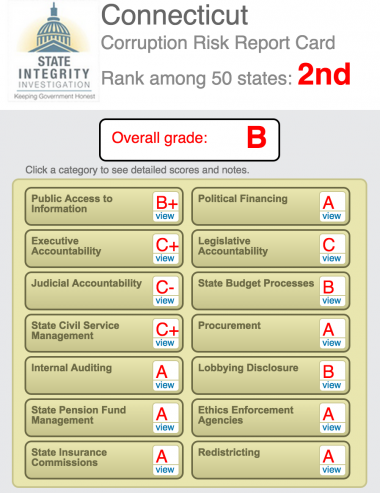 Connecticut has benefited from some spectacular corruption.

In the past decade, no branch of government has been spared from abuse, exploitation and disgrace.

There was Gov. John G. Rowland, who, in league with a prominent state contractor, turned his administration into a criminal enterprise.

There were legislators who, in the pursuit of power, were willing to be owned by lobbyists.

There was State Treasurer Paul Silvester, who used his office and the state’s treasury to extort millions in kickbacks for himself and his friends.

There were the judges who suppressed public knowledge even of the existence of court cases involving influential and prominent litigants. And there was state Supreme Court Chief Justice William J. Sullivan, who delayed the release of a controversial ruling in order to win appointment for his Republican protégé.

Little wonder that Connecticut has undergone significant reform in recent years, and that, as a result, state government has never been more open to public view and inspection. In the new State Integrity Investigation — a joint project of the Center for Public Integrity, Global Integrity and Public Radio International — Connecticut now ranks second in it transparency and accountability, earning a solid B grade and numeric score of 86.

Once known for its smoke-filled back rooms and powerful political power-brokers, Connecticut is today a place where public spending is viewable online, campaign money is easier to track, elections are publicly financed, information is readily available and the average citizen can more easily believe that elected officials are voting in his or her, rather than special, interests.

The ongoing vigilance of a handful of so-called “watchdog” agencies has slowly transformed a closed network of deal-makers and special-interest operatives into a more ethical and less rapacious democracy. The so-called “revolving door” between the government and those it regulates appears to have been closed.

A ground-breaking system of publicly financed elections, though flawed and still the subject of litigation and debate, is giving a new and diverse crop of candidates a better chance to have their voices heard; and a Treasury Reform Act, built on the wreckage of public scandal, has brought a decade of professional and ethical oversight of the state’s investments.

First settled by Puritans from the Massachusetts colonies, Connecticut was a major participant in the Revolutionary War. In 1784, the state became the first in the nation to vote for the gradual emancipation of its slaves.

Sandwiched between New York City and Boston, Connecticut was one of the country’s earliest centers of manufacturing and finance, where captains of industry created a culture known for fiercely provincial local governments, a stable and comfortable lifestyle, and a sophisticated population interested in the arts, education and socially progressive ideas.

It is now a state of 3.6 million residents where unaffiliated voters outnumber both Democrats and Republicans, same-sex marriage is legal, gasoline is heavily taxed and Catholicism is the dominant religion. Per-capita income is the nation’s highest, yet some of the nation’s poorest neighborhoods are only blocks from lavish estates owned by Wall Street commuters. Casinos run by two Indian tribes contribute a significant portion of the state’s annual revenue.

Calling Connecticut’s government transparent, however, still might be too strong a word, despite new Gov. Dannel Malloy’s stated intention of making it so. (Even he has his limits. In a recent budget proposal, the governor fudged his own transparency pledge and used some “soft” numbers to sell his proposal to the state’s labor unions. His overall approach, on the other hand, has been a constant mantra to his commissioners to be “as open and accessible as possible,” said Roy Occhiogrosso, Malloy’s senior advisor.

Certainly last year’s unveiling of an online searchable state-spending database is a helpful step in the direction of full disclosure. The site – dubbed transparency.CT.gov — “was designed to be the most comprehensive, single point of reference where citizens can review how Connecticut tax dollars are being spent to support state government programs,” the website says.

The name also makes it plain that in “Corrupticut,” where public regard for officialdom had fallen to new lows, the quest for open government is not only admirable, but has become good politics. The searchable site, authorized during the previous administration, is the latest addition to the state’s massive website that reaches, to varying degrees, into every department and legislative office. The Department of Administrative Services is even using the Internet in an experimental “reverse auction” online procurement system intended to improve transparency while driving down costs.

Probably the biggest contributor to the impetus for cleaner and more open government was John Rowland, the youngest governor ever elected and arguably the most corrupt. The three-term Republican’s 2004 conviction and imprisonment on a federal corruption charge ushered in a new era of ethical reform, including a revised state code of ethics that, among many other things, prohibited public officials from taking anything of value from companies or individuals doing business with the state.

Tough contribution limits and reporting requirements on lobbyists changed the culture of the legislature away from seeing lobbyists simply as the bearers of campaign cash. Lobbying of the executive branch, which had been nearly invisible, was brought into the light.

Reform came to the elected Treasurer’s office in the wake of former Treasurer Paul Silvester’s involvement in a kickback scheme that rewarded him and his cronies for investing state money in particular companies. The imposition of new laws and a strict investment policy helped reinforce the new treasurer’s push for an open office and a better relationship with the state’s Investment Advisory Council. The payment of finder’s fees, which put millions into the pockets of prominent politicians, was outlawed. Silvester’s use of ill-gotten campaign funds also helped motivate passage of a publicly financed election system.

It took scandal in the judiciary to bring reform there, too, though jurists weren’t so much dishonest as they were secretive and protective of their own.

Historically, the Connecticut judiciary has made little attempt to hide its disdain for the Freedom of Information Act, which subjects only its administrative documents to public scrutiny. Over the years, judges have liberally interpreted “administrative” to mean most everything, said Mitchell Pearlman, former executive director of the state’s Freedom of Information Commission.

This antipathy for public visibility was probably best exemplified by the invention and use of so-called “super-sealed” cases. These were files so secret that “court clerks were not even allowed to acknowledge their existence,” the Associated Press reported in 2007. They typically involved high-profile litigants such as former University of Connecticut President Philip Austin.

The judicial branch’s secrecy became a public spectacle in 2003 when The Hartford Courant and Connecticut Law Tribune revealed the existence of the super-sealed files; and, in the lawsuit that followed, the State Supreme Court ruled, 4-3, that the docket files were not administrative in nature and therefore did not have to be disclosed.

That would have been bad enough, but it became an even bigger outrage when Chief Justice Sullivan, who was about to retire, delayed announcing the decision so his protégé and likely successor did not have to face legislative questioning about the ruling.

Ultimately Sullivan was censured by the Judicial Review Council, an independent unit of government that has disciplined only ten judges since 1989. Sullivan’s protégé was not appointed chief justice, and the court’s interim chief, Justice David Borden, led the push for sweeping court reform.

Judges are now required to hold hearings before sealing files, dockets are available online and cameras are allowed in some courtrooms as part of a “pilot program.”

As much as the new laws have shined bigger and better lights on the workings under the capitol dome in Hartford, there are still shadows, however.

Much of the state bureaucracy’s impulse to avoid outside scrutiny involves the control of information; and here the state’s Freedom of Information Act sometimes falls short.

Experienced bureaucrats know that delaying the release of information is often as effective as denying its release, especially when the Freedom of Information Commission is slow to process complaints and reluctant to impose fines.

According to ex-director Pearlman, the agency’s “over-arching policy” is to be “educational and remedial” rather than punitive. The policy is partly one of necessity, since it has been “inundated” with complaints since its creation, he said.

Though an informal mediation process quickly resolves many cases, formal complaints can take months – by which time the importance or impact of the information may have diminished.

The legislature’s more recent efforts to tweak the FOI law have also been in the direction of less, rather than more, disclosure.

Public resources are always an issue, of course, and the ongoing enforcement of anti-corruption or ethics legislation, like other programs, is dependent on the amount of money available to pay for it. And even in a state with the nation’s highest per capita income, times have been hard. A near 9-percent unemployment rate at times, corporate flight, collapse of the housing market and financial losses by the state’s most wealthy have cut deeply into the government’s revenues.

In Connecticut’s case, the government’s response to a multi-billion-dollar budget deficit threatened to de-fang the state’s watchdog agencies, even though they are theoretically immune from economic strangulation by those they watch, critics said.

The agencies designed to keep the government honest were among the first casualties of the state’s recent economic cutbacks. A last-minute union deal spared them from deeper cuts, but nine independent units of government – including the Office of State Ethics, Freedom of Information Commission and State Elections Enforcement Commission – were consolidated under one Office of Governmental Accountability. The move was to save money and improve efficiency at a difficult time, advisor Occhiogrosso said. But various newspaper editorials and citizen groups agreed with one FOI official who called it “the greatest setback for good and open government in recent years.”

It remains to be seen whether any of the consolidated watchdog units lose their respective directors and decision-making powers in addition to their administrative control, but already they have suffered staff reductions that limit their abilities to function.

For example, the Office of State Ethics will only audit ten lobbyists this year, its director, Carol Carson, said. Last year the agency looked at 40.

Equally as distressing to many are the threats to the state’s ground-breaking system for publicly financing election campaigns. Known as the Citizens’ Election Program, it has been hailed as a potential model for the nation.

The program has been through two election cycles, and, until early February, had been without a director for a year. Meanwhile, its funding has been “repeatedly targeted,” says Cheri Quickmire, executive director of Connecticut Common Cause. The state’s response to its financial difficulties has raised “grave concerns about the ongoing viability of the Citizens Election Program,” she said.

The program has also been challenged in court, by minor party candidates, lobbyists and the American Civil Liberties Union, and parts have been ruled unconstitutional.

If the Malloy administration has anything to say about it, Occhiogrosso said, the state’s overall trajectory will be toward more accessibility – at least in the executive branch. “Government operates best when it operates in the open,” the advisor said, repeating Malloy’s standard phrase.