The Rocky Mountains in Colorado. Shutterstock

Why Colorado ranked 33rd of 50 states 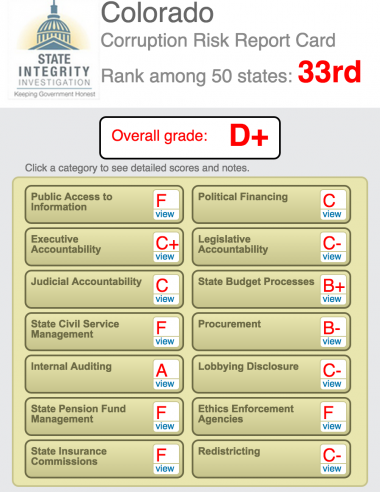 The crisp, clean image of Colorado’s Rocky Mountains by and large extends to state government here, helped along by waves of newcomers that have fueled the state’s rapid growth and forged a political dynamism. No entrenched political machines controlling the levers of power here. No history of corruption, either.

Indeed this fast-growing state of 5.1 million people can boast of numerous programs to boost transparency, and both voters and government officials typically back efforts aimed at passing ethics laws making government officials more accountable to the folks who put them in office.

“Most people agree that there is a culture of transparency and openness in government and it always has been that way,” said Jim Carpenter, who served as chief of staff to former Gov. Bill Ritter.

“This is not a very grafty kind of state,” added Seth Masket, a political science professor at the University of Denver.

But the devil is in the details under the golden dome of the Capitol on the hill in Denver. Some reform efforts appear to have backfired, and others seem to lack the small print that could turn their promise into reality. And so Colorado earns a middling grade from the State Integrity Investigation conducted by the Center for Public Integrity, Global Integrity and Public Radio International: a letter grade of D+ and a numerical grade of 67, ranking Colorado 33rd among the 50 states.

A tradition of transparency

Colorado was an early adopter, in 1973, of sunshine laws that regulated lobbying activity, required public officials to disclose assets and made any meeting of two or more members of a board or commission open to the public. But there’s also been plenty of activity since: the sunshine laws have been revised, as have campaign finance laws. And in 2006 the state legislature overhauled state ethics laws, enacting a gift ban for state employees and public officials while establishing an independent ethics commission.

On the most basic level, citizen groups praise the availability of documents that elected officials, judges and lobbyists must file — documents like registration forms and campaign finance records. In dozens of interviews with government officials, activists and academics, most said these filings are easy to find, easy to read, comprehensive and free of charge. Forms required by the secretary of state are available to the public on that office’s website as soon as they’re filed, and the website has a search function that makes findings documents simple.

Likewise, efforts to publicize the work of the general assembly received high praise. Debates have been broadcast live on the legislature’s website or on television since 2008, so it’s easy for interested parties to follow the legislative process. When hearings are in progress, all documents relevant to the proceedings are posted on the website, and the same goes for handouts that legislators might bring to the chambers. It is no longer necessary for people to travel to Denver to sit in on hearings — Colorado residents can watch in real time, whether they’re out on the Eastern Plains in Limon or up at 11,000 feet in Leadville.

By and large, the state’s judiciary also gets solid grades for transparency. The fact that judges in Colorado are barred from campaigning under the state’s code of judicial conduct may be one reason the judiciary is well-regarded and relatively free of corruption, according to several political observers. Judges are instead evaluated by the State Commission of Judicial Performance, which was established by the General Assembly in 1988 to provide the public with detailed information about judges for use in retention elections. These reviews of judges, which also assess their character, court demeanor and legal reasoning, are essentially the only data that voters have access to in voting whether to retain a judge. The reviews are published online and in printed guidebooks sent to all voters prior to an election.

But not all is rosy on the accountability front in Colorado. One gap highlighted by the State Integrity Investigation: the office of the secretary of state, which collects much of the information regarding candidates, lobbyists and officeholders, does not audit campaign finance reports or asset disclosure forms. Instead, that office can respond if a third party files a complaint requesting an investigation into someone’s filings. But Luis Toro, director of Colorado Ethics Watch, says such complaints are extremely rare. So it’s hard to know how vigorously such complaints would really be pursued by the secretary of state’s office.

Colorado also scored poor marks in regard to certain standards for members of the general assembly and the state workforce. For example, the state does not have an explicit clause barring nepotism in the hiring of state employees. Legislators have few restrictions regarding private sector employment following their legislative service — though lawmakers are barred from lobbying for two years — and there are no restrictions on former state government employees. Many state residents see any sort of limitation on legislators’ private employment as impractical, since most lawmakers are part-timers in session only four months a year. But some “good government” advocates believe that such citizen legislators have built it conflicts of interest because issues affecting their private-sector jobs are bound to come before them.

In several other important ways, efforts to promote clean government in Colorado have not always worked as planned. Often the unforeseen consequences only emerge with the passage of time.

Take, for example, the Colorado Open Records Act, passed in 1969. It is seemingly an earnest attempt at transparency. But many close observers of state government complained that the design and execution of the law are continually at odds with its spirit.

For instance, the measure did not create a centralized office through which requests for government documents are processed. Instead, the law makes the custodian of that document responsible for releasing it upon request. And that has led to trouble.

Steve Zansberg, a partner at Levine, Sullivan, Koch and Schulz in Denver, said problems come about because there are caveats in the law which the custodians may not understand. Zansberg says he’s had requests for documents rejected for many reasons. Most commonly, he said, requests are rejected because the documents are considered personnel files, which can be exempt from the open records laws. But that can also be a smokescreen. Frequently, said Zansberg, in cases involving law enforcement officers, his requests for incident reports have been rejected based on the exemption for personnel files. “These are never personnel matters, but they do reject these requests often,” he said.

Other difficulties arise, he said, because some custodians will not sort through documents, others charge exorbitant fees, and some refuse to turn over information in useable form. And there is an ongoing argument between information-seekers and custodians about the responsibility of the custodian to redact sensitive information and whether a piece of information can be withheld.

Perhaps the biggest issue is the lack of any formalized administrative appeal process when requests for information are denied. If a request is denied, the only recourse is to file an appeal through the courts. The courts have imposed stiff fines on people appealing denials when the court determines that a request for information was legitimately rejected.

Likewise, many political observers here believe that a series of campaign finance changes passed in 2002 — a well-meaning attempt to diminish the influence of money in campaigns — have actually created a much bigger problem. Amendment 27 dramatically cut the amount of money that individuals can give to candidates and created an outright ban on corporations and labor unions donating to parties and candidates. The Colorado Supreme Court has said that the 2002 changes may now represent a violation of free speech rights in light of the U.S. Supreme Court’s Citizens United decision, but as of yet there has been no legal challenge.

In the meantime, though, the restrictions have sent potential donors looking for another avenue through which to influence campaigns. Two years after Amendment 27, Coloradans saw vividly that limiting donations does not necessarily keep money out of campaigns. In 2004, 527 committees — so-called for the provision of the tax code that governs them — spent millions on campaigns in the state of Colorado. The 527s can raise unlimited amounts of money and do not have the same disclosure requirements as candidates or political parties.

In particular, Colorado politics was rocked by the way 527 committees were used by a small group of wealthy Democrats to run a deep-pocketed shadow campaign, largely hidden from public view, that helped engineer a Democratic takeover of the legislature in 2004. The 527s were funded by just four millionaires — Internet pioneer Jared Polis, QuarkXpress founder Tim Gill, medical technology heiress Patricia Stryker and geophysicist Rutt Bridges. Working in collaboration, this “Gang of Four,” as they were dubbed by the Colorado press, spent about $2.5 million to win a few key races. They researched issues, polled likely voters and paid for campaign materials. At the time, not even the candidates they were helping knew who was behind the effort.

Many political experts in the state said that 527s are the most influential force in Colorado politics, a development rooted in those 2002 campaign finance laws passed by voters.

“There is no less money in politics now,” said Masket. “It has just become a lot more difficult to track and in some cases it has become impossible to know where the money is coming from.”