Why California ranked 4th of 50 states 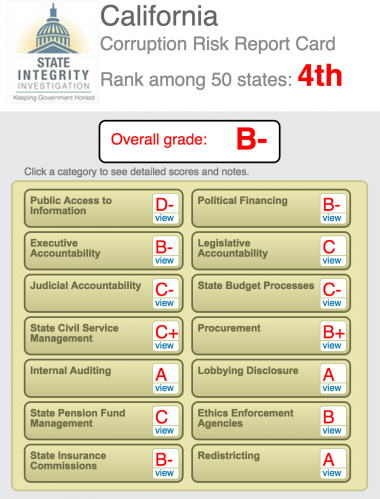 For better or worse, there’s only one California. With the largest population, third-largest area and by far the most campaign spending, it has been both mocked and admired for its independence, its powerful citizen initiative process, its far-reaching political reforms, its Hollywood actors-turned-governors Arnold Schwarzenegger and Ronald Reagan, and its sometimes-wacky ideas of governance.

California has a maze of laws written to make government transparent and to diminish the risks of dishonesty, favoritism and conflicts of interest, but sometimes there are gaps between what the laws say and what they actually do.

Some laws, such as new redistricting procedures, successfully illuminate what should be public processes. Many others, such as campaign finance limits, simply don’t work or have unintended consequences. Open records laws require disclosure but aren’t easily searched online. The state budget process mandates public input, but is usually concluded in secret. The public pension board’s legal obligation to pensioners over taxpayers has cost Californians unexpected millions.

It’s a rich mix that has yielded a mixed bag in the State Integrity Investigation conducted by the Center for Public Integrity, Global Integrity and Public Radio International. Overall, California ranked fourth among the nation’s 50 states, thanks to a host of laws aimed at making government more transparent and accountable. Its grade of B- and overall score of 81, however, reflect the reality that the sun could shine brighter at the capitol in Sacramento.

Looking out for pensioners

California has boomed many times since gold was found at Sutter’s Mill in 1849. Lately, though, much of the shine is off the Golden State. For two years, this state of 37.7 million people has been second only to Nevada in unemployment. Its credit rating is among the worst in the country. Midyear budget cuts lopped $980 million from colleges, libraries, school bus subsidies and other programs. To prevent deeper cuts elsewhere, the state is shutting down 400 local redevelopment agencies.

Fallout from the weakened economy is particularly apparent in public pension funds. The California Public Employees’ Retirement System (CalPERS) was once considered a model pension system and it’s still the nation’s largest public pension fund, with more than 1.6 million members and, as of Feb. 28, more than $236.5 billion in investments. However, it lost nearly a quarter of its value during the global recession in 2008-2009. The state expects to spend $3.5 billion to plug this year’s pension gap.

Waking up to the reality of a system that’s no longer self-sustaining, some Californians want to eliminate fixed pensions altogether, while others question the board’s governance, which earned low scores in the State Integrity Investigation for political influence and the way board members are selected.

Six of the 13 board members are current or former public employees elected by their peers. The rest are appointees, or they serve because of their job or elected office.

Also, since 1992, board members have been mandated by the state Constitution to give priority in decision-making to CalPERS members, which means their decisions aren’t necessarily in taxpayers’ best interest.

Joe Nation, a professor in Stanford University’s Public Policy Program and a former state Assembly member, described how that situation typically plays out. CalPERS staff members told him that in March 2011 the board ignored their recommendations and projected an unrealistic rate of return on investments. That allowed public employees on the board and other fund participants to contribute less to the pension fund from each paycheck.

Why not? If projections fall short, it’s taxpayers who fill the gap.

Gov. Jerry Brown wants independent experts on the board. That’s part of his 12-point reform initiative, which also calls for shifting some risks to workers by combining a fixed pension with 401(k) plans.

In October he signed a law for a 10-year cooling-off period before former pension board members and executives can lobby the fund to solicit business, although it came too late to affect practices that warranted low accountability ratings in the survey. The tougher new law is largely a response to scandals such as the one involving former pension board member Alfred J.R. Villalobos, accused of fraud in his lucrative post-government job in which he tried to steer CalPERS contracts to his clients, and Federico Buenrostro Jr., a former CalPERS chief executive accused of taking gifts worth tens of thousands of dollars from Villalobos and becoming his associate one day after leaving the pension fund. Both have denied any wrongdoing, and the case is pending.

All the regulations passed and campaign finance reports scrutinized have had little discernible effect on limiting campaign spending in California, experts agreed.

Thus, the state rated high on indicators for disclosure requirements and established contribution limits, but got low scores for the effectiveness of contribution limits, the heavy use of loopholes and the adequacy of limits on donations to parties by political action committees.

Don’t blame the Fair Political Practices Commission (FPPC), said Derek Cressman, Common Cause’s regional director of state operations for Western states. It’s been regulating political practices since Californians established it by initiative in 1974. “The FPPC over the past five years in particular has actually become a pretty legitimate watchdog agency,” he said. “The problem is the laws themselves are so porous.”

In his 2007 book, The Recall’s Broken Promise: How Big Money Still Runs California Politics, Cressman wrote about contributors funneling donations through parties or political action committees to buy campaign ads. In an interview, he described a loophole called astroturfing, or spreading around spending to make it look as if it came from grassroots supporters. “An example we dug up,” he said, “was with Ameriquest, one of these subprime lending entities that has since gone defunct. They were one of the major backers, if not the major backer, of then-Gov. Arnold Schwarzenegger’s special-election agenda in 2005, but you had to do a lot of sleuthing to uncover that because they funneled the funding through a series of intermediaries with names like Funding for America. Stephen Colbert couldn’t have made up anything better.”

Redistricting comes out of the back room

One change that may yield unintended consequences for the Republicans and business groups that supported it was taking the job of drawing district boundaries away from legislators, whose work behind closed doors generally ensured re-election for incumbents. Proposition 11 in 2008 and Proposition 20 in 2010 gave the power of mapping districts to the new California Citizens Redistricting Commission.

Its work earned top marks in all of the State Integrity Investigation’s five redistricting indicators from sources who have tracked redistricting nationwide. They praised California’s commissioners for trooping to 34 public hearings that attracted more than 2,700 speakers and for considering at least 46 proposed maps from various groups.

“In fact,” said Eric McGhee, a policy fellow with the Public Policy Institute of California, “I think that they became victims of their own transparency.” The commission held so many meetings and hearings at first, he said, that when they later had to cancel some to work on the maps, “they got a lot of flak for it.”

Some observers predicted the new maps would lead to more competitive elections, possibly giving a net gain to Democrats,who outnumber Republicans in the state 44 percent to 31 percent. Republicans sued to have the new maps for congressional and state senate districts tossed out, but on Oct. 27 the state supreme court rejected the suit without comment. Republicans obtained enough signatures to get a referendum on the November 2012 ballot seeking to overturn the commission’s state senate district maps. However, the state supreme court decided voters will use the commission’s map for elections in 2012.

‘Kabuki theater’ at the Capitol

There’s plenty of transparency for meetings in Sacramento, but not necessarily for the right ones. California has open meeting laws for local governments (the Brown Act) plus state boards and commissions (the Bagley-Keene Open Meeting Act), but those laws don’t cover the California legislature or the final budget negotiations.

Since that’s where the action is, close observers don’t put much stock in the hours of public hearings and testimony that precede adoption of a budget in California, which meant the state got high scores for citizen input at budget hearings, but low scores for transparency.

Asked if the process is open, Philip J. Romero, professor of business at the University of Oregon and chief economist under ex-Gov. Pete Wilson, said, “No, there is a Kabuki theater that claims to do all those things, but the fact of the matter is, it is all a useless show; and significant decisions are made by the Big 5 — the governor and four legislative leaders — usually in closed session and late in the process.”

The department of revolving doors

Except at the pension board, California requires a cooling-off period of just one year to keep state officials from trying to influence their former agency; the requirement got the state a positive score in the rankings. But experts agreed there are ways around the law, and those are used routinely, earning a low score on the indicator about the law’s effectiveness. Former lawmakers can and do work as consultants or strategists during that cooling-off year, according to Romero.

Letting the sun shine in

There’s good news on the transparency of state records. California’s public records access laws are considered powerful because they define what must be public broadly, with preference going to openness if there are equally compelling arguments for disclosure and privacy. For example, disclosures for officeholders, lobbyists and campaign contributions spelled out in the California Political Reform Act of 2011 are rigorous, earning positive scores on indicators about public access laws and the availability of public records. Last-minute campaign donations must be posted within 24 hours.

California got low scores on other indicators for relying on courts rather than a separate agency to handle appeals.

The improvements in online access, notable in indicators regarding procurement information, aren’t happening fast enough to eliminate low scores for California on measurements requiring that online records be easy to search. Another technological downer: The judiciary’s new computer system has actually slowed down release of information on newly filed briefs.

With a hundred-year-old right to change laws through propositions, Californians have embraced the idea that if you don’t like the way state laws work, go out and write some of your own.

The initiative process has given governors a way to push their agendas when the legislature stalls, sent campaign spending soaring and changed the rules for raising revenue, said Jessica Levinson, an adjunct professor at Loyola Law School. “And we also can create programs and not necessarily dictate how they will be paid for.”

As long as Californians are so eager to use ballot initiatives to change laws, said Kim Alexander, president and founder of the nonprofit and nonpartisan California Voter Foundation, voters need an election process that helps them learn about the issues, perhaps with debates available by webcast and impartial analysis like that provided by the Legislative Analyst’s Office.

Such proposals are beyond the scope of the State Integrity Investigation’s indicators but would no doubt be important in improving transparency in the Golden State. Alexander’s comments underscore the belief of activists on both sides of the aisle that there are gaps between what laws attempt and what they achieve — leaving plenty of room for improvement.