Why Arkansas ranked 28th of 50 states 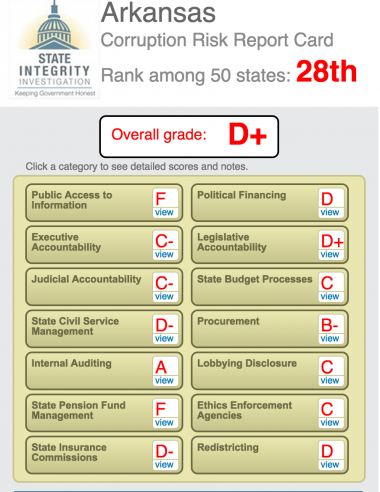 When Julie Benafield Bowman was Arkansas’s insurance commissioner, she was sued for accepting hospitality from representatives of United Healthcare before and after ruling in the insurer’s favor in a major dispute.

The insurer was in a battle with three surgical hospitals in Arkansas over medical reimbursements under the state’s so-called “any willing provider” act.

The surgical hospitals suspected they were being paid millions of dollars less than full-service facilities for providing similar medical services. However, Bowman ruled in December 2007 and again in September 2008 that the law did not require the hospitals to be paid equally.

Only weeks later, Bowman resigned as state insurance commissioner and went to work for United Healthcare as its director of regulatory affairs in Arkansas and Tennessee. The original lawsuit eventually was settled. When it was filed, United Healthcare was being sued over allegations it violated laws in several states, Arkansas among them. Ultimately, Arkansas helped negotiate a settlement under which United Healthcare agree to pay $13 million to 36 states and improve its payment system.

That free-flow of ex-legislators to jobs lobbying their former colleagues prompted the Arkansas Legislature to pass new “revolving door” laws to prevent former top state regulators from moving to positions in industries they regulated.

Reformers considered the move a step in the right direction, but this state of 2.9 million residents has a ways to go in regard to transparency and accountability. Arkansas received a D+ and a numerical score of 68 from the State Integrity Investigation, a collaborative project of the Center for Public Integrity, Global Integrity and Public Radio International. The score ranks Arkansas 28th among the states.

Thanks to the new law, for the first time, regulators and lawmakers will be required to observe a one-year “cooling off” period after they leave state government. Though ridiculed by some as meager, the legislation marks a significant step in years-long efforts to fill what integrity-in-government advocates have long viewed as gaping holes in state ethics laws.

Act 1200, which took effect in July, bars former high-ranking officials of the state Public Service Commission and the insurance, banking and securities departments from representing an outside party in a case where the former official participated in an investigative or decision-making capacity.

The law makes a knowing violation a Class A misdemeanor, punishable by up to a year in jail and a $2500 fine.

Sam Perroni is a Little Rock lawyer who represented the surgical hospitals in the initial case and in a follow-up civil suit against United HealthCare. He said there was a “pervasive atmosphere of insurance company agents – attorneys – bestowing gifts and other benefits upon the insurance commissioner,” followed by the commissioner taking a job with the insurer.

In a story in Arkansas Business in 2009, Bowman strongly denied that she did anything wrong in handling the surgical hospitals’ complaint against United HealthCare.

Perroni concluded that existing state ethics laws governing gifts and conflicts of interest were “totally ineffective,” and he held out little hope for the new law restricting regulators from leaving government for industries they regulated doing much good.

“All the laws in America mean absolutely zip if there’s nobody willing to enforce them. Look at that statute and try to see what sanctions there are and who’s going to enforce them,” said Perroni, a former federal prosecutor and criminal defense lawyer.

In other examples of the so-called “revolving door,” the past two chairmen of the state Public Service Commission left the regulatory agency to take jobs in the electric power industry.

Sandra Hochstetter was a lawyer for the state’s largest natural gas company when then-Gov. Mike Huckabee appointed her as PSC chairman in 2000. In the summer of 2007, Hochstetter announced her intention to leave the agency later that year to accept a vice presidency at the Arkansas Electric Cooperatives.

Hochstetter initially intended to stay on to hear a case involving Southwestern Electric Power Company’s request to build a disputed coal-fired power plant in Southwest Arkansas, even though SWEPCO was associated with her future employer. When parties in the case objected, Hochstetter recused from hearing the case, and not long after she abruptly left the regulatory agency at the behest of Huckabee’s successor, Gov. Mike Beebe, and the state attorney general.

As reported by TalkBusiness.net, before leaving the regulatory panel Suskie had been a tough questioner of Entergy Arkansas’ bid for independence from parent company Entergy Corp.

Among the future options under consideration by Entergy Arkansas is joining the transmission operations of Southwest Power Pool, or another transmission coordinator in the region.

Special interests have long sought out former legislators to serve as agents to influence policymaking at the state Capitol. Ex-lawmakers traditionally have made smooth and often swift transitions from legislating to lobbying.

For example, former House Speaker Robbie Wills, who was instrumental in establishing the state lottery’s structure and operations during the 2009 regular session, went to work as a lobbyist for one of the program’s largest vendors after leaving office in January 2011.

Act 48 of 2011 bars former legislators from becoming registered lobbyists in the state for one year after they leave office.

“We’ve had a little bit of criticism, and the criticism is that it doesn’t go far enough,” Rep. Ann Clemmer, R-Benton, acknowledged while presenting the House version of the measure to colleagues, according to an Arkansas News Bureau report.

But Clemmer said that “when this passes, we will be the first Legislature to ever limit ourselves in any manner, and I think it’s long overdue.”

It also does not address a thorny issue now embroiled in litigation.

Current rules bar members of the state House and Senate from receiving per diem and mileage if they live within 50 miles of the Capitol. But they are allowed to pad their legislative income by claiming home office expenses, totaling tens of thousands of dollars in some cases, with little or no documentation.

Clemmer is one of two legislators named in a lawsuit filed in September in Pulaski County Circuit Court on behalf of the Arkansas Public Law Center. The suit alleges the practice violates Amendment 70 of the Arkansas Constitution, which prohibits legislators and other state elected officials from receiving income for their duties other than their salaries.

In October 2010, just weeks before the general election, Beebe signed an executive order prohibiting state workers from commuting between home and work in state-owned vehicles except when “a legitimate state business purpose is established.”

While Beebe’s order covers most state agencies, it does not cover constitutional officers or higher education institutions, or constitutionally established agencies such as the state highway department and the state Game and Fish Commission.

In 2011, Beebe signed Act 1021 into law. It requires state constitutional officers and their employees who drive to and from work in a state vehicle to reimburse the state for the mileage at the same rate — 42 cents per mile — as they are reimbursed by the state for using their private vehicles for official state business.

After the Legislature acted, the Republican Party of Arkansas dropped a lawsuit it filed in 2010 over personal use of state vehicles by constitutional officers. A separate lawsuit filed on behalf of taxpayers seeking reimbursement for state officials’ past use of state vehicles for personal use was dismissed. A circuit judge ruled that it lacked factual basis and that some defendants were not properly served.

While the state’s effort at reform has been admirable, the laws are only effective if they are enforced. And Perroni is among those who remain skeptical.

Enforcement of a Class A misdemeanor charge would require a locally elected prosecutor to act on a complaint and conduct a criminal investigation.

“I have no faith in politicians investigating other politicians for allegedly violating that statute,” Perroni said. “If they’re going to draft a statute like that, they ought to put in a provision that says a taxpayer can file a civil action and if (a violation is) found to be true, the taxpayer could get punitive damages.

“Otherwise, it would cost the taxpayer money to prosecute the case. It would never happen.”