Why Arizona ranked 30th of 50 states 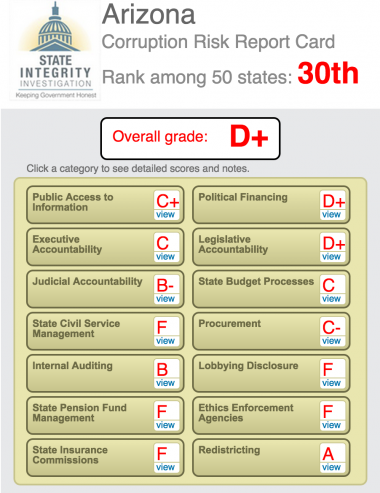 Arizona, like most states, tends to initiate reforms after scandals. Good government laws are usually the scar tissue left from prior problems––states with fewer good government laws simply may not have needed them. Arizona, a state of more than 6 million residents, has needed them, however, and may need more.

The AZSCAM scandal in the early 1990s, during which many legislators were caught on camera taking bribes for their votes, was the last big spur for reform. Out of it came the Arizona public campaign financing system, an independent redistricting system, and some limits on gifts from lobbyists. The current Fiesta Bowl scandal, in which lawmakers accepted luxury trips and game tickets and didn’t report them, has put reforms back in the spotlight.

Both messes point up clear weaknesses in the state’s ethics and transparency regime. Arizona landed 30th with a grade of D+ and a numerical score of 68 in rankings by the State Integrity Investigation, a collaborative project of the Center for Public Integrity, Global Integrity and Public Radio International.

The Fiesta Bowl scandal, which began with an Arizona Republic report in 2009, is encouraging new efforts to close loopholes in the state’s gift laws and to improve the clarity and accessibility of financial disclosure reports. Some elected officials and advocacy groups are also pushing to impose new limits on lobbyists.

The demand for tighter rules is coming from some of the same officials who received Fiesta Bowl gifts and didn’t include those favors on financial disclosure forms.

A few of those caught in the headlines are now urging more clarity in the laws, claiming it was the lack of clear rules — not purposeful malfeasance — that caused much of the problem.

Indeed, Gov. Jan Brewer herself, who was asked to return illegal Fiesta Bowl donations that flowed to her reportedly without her knowledge, has called for state lawmakers to clarify state laws governing gifts to public officials in light of the scandal. Secretary of State Ken Bennett, who amended his own financial disclosure forms to reveal two Fiesta Bowl trips he took while a legislator, is calling for new look at the forms.

Most of the lawmakers involved in the scandal voted on several Fiesta Bowl-related issues in recent years.

A March 2011 internal investigation commissioned by the Fiesta Bowl, a non-profit group promoting metro Phoenix bowl games, detailed how the organization encouraged employees to write campaign checks to specific candidates and then reimbursed the employees from Bowl funds––a violation of state election laws and IRS nonprofit rules. More than two dozen politicians were given money by bowl employees and their families between 2000 and 2009. Among other prominent Arizona officials asked to return donations in 2011 were Arizona’s two U.S. Senators, Jon Kyl and John McCain, and state Senate President Russell Pearce, all Republicans.

In 2011, the Bowl asked more than 30 state legislators to repay them a combined amount over $160,000 for airline tickets and hotel bills picked up by the organization. Pearce was asked to repay $39,000 for tickets and other benefits from 2002 to 2009, including trips to Atlanta, Boston, Chicago, Dallas, Denver, Pasadena and San Francisco.

Arizona appears to have a comprehensive legal ban on political gifts and hospitality, but there are still major loopholes, says Bart Turner, president and CEO of the Clean Elections Institute and former president of the Valley Citizens League. Turner spearheaded the passage of the gift-ban law a dozen years ago.

Turner says the loopholes exist because legislators demanded flexibility in the law, which creates uncertainties. “Now they plead that they don’t understand them,” he adds.

Arizona legislators can accept gifts of travel and hotel rooms from lobbyists and their employers and, in limited circumstances, can receive tickets to entertainment events. But they must report those trips as gifts on their financial disclosure forms if valued at $500 or more. In the Fiesta Bowl scandal, many didn’t. As a result of the scandal, financial disclosure forms are now posted online, said Arizona Secretary of State communications director Matt Roberts. The office may expand the website to include past reports.

An eight-month state investigation by Maricopa County Attorney Bill Montgomery cleared 28 lawmakers of wrongdoing in December 2011 even though many admitted to taking tickets and travel and not reporting them. He blamed Arizona’s laws saying they were inconsistent and vague. A federal investigation is still under way.

At the top of the accountability hierarchy in Arizona are the Senate and House ethics panels, but they are not known for aggressiveness.

Neither panel has opened investigations of the legislators implicated in the Fiesta Bowl scandal, even though at least 16 of them openly admitted they violated the financial disclosure law.

In September 2011, the Senate Ethics Committee took up the case of a state legislator, Scott Bundgaard, who a month before had pleaded “no contest” in a domestic violence case. It was the first Senate probe of one of its members in the 21st century. Bundgaard resigned from the Arizona Senate in early January to avoid scrutiny by the committee.

Even before the Fiesta Bowl scandal, financial disclosure forms were considered too general and useless in providing a snapshot of an official’s financial situation, says George Cunningham, president of the Grand Canyon Institute, a nonprofit centrist research institute, and a widely-respected former state senator and representative.

A major problem: They aren’t audited, or cross-compared with lobbyist reports, says Tim Schmaltz, coordinator of Protecting Arizona’s Families, a nonprofit coalition that lobbies the legislature for community needs. All statewide elected officials must disclose the cost of a trip if the value is more than $500. Lobbyists must disclose all travel related expenditures that benefit any state official.

The Secretary of State’s office checks to see that the asset disclosure or lobbyist forms are filed, but no state official checks them unless a complaint is filed, which is extremely rare.

That needs to change, said Tim Hogan, executive director of the Arizona Center for Law in the Public Interest, a nonprofit good government group. “There should be random audits like the IRS does to ensure the accuracy of information provided.”

Some Arizonans believe the time is ripe for an independent ethics panel or commission.

“No one has the specific duty of enforcing ethics,” said former Attorney General Terry Goddard, who is also a former mayor of Phoenix and a recent gubernatorial candidate.

Responsibility for ethics is currently spread across several groups including the Attorney General’s office, a state ombudsman, the House and Senate ethics committees, the Judicial Ethics Advisory Committee, and internally at individual government agencies.

“Without an independent ethics board with authority to make rules regarding the application of the law to specific circumstances, and the ability to enforce its interpretations, is [ethics enforcement] fully effective? No,” said Tim Nelson, the former chief deputy attorney in the AG’s office.

The Attorney General’s office faces dual obligations when certain ethics issues come up, Nelson said. They advise a set of government agencies, but they also are the enforcers of some ethics violations. “That creates a certain tension,” he said. It’s difficult for people to seek ethical guidance from the same office that might turn around and file charges.

Hogan, director of the Arizona Center for Law in the Public Interest, believes there would be a great benefit if an independent ethics commission looked even just at conflicts of interest.

“There are all kinds of allegations made on a regular basis that certain people have a conflict of interest,” Hogan said. “Complaints are brought by one politician against another all the time about conflicts of interest, then the other side disagrees and the issue goes away.”

The citizen’s group Arizona Town Hall has recommended that the legislature create a 72-hour notice period between a proposed final budget and its adoption by the Legislature. The window would give the public and members of the legislature time to digest the final product. Other states, including Florida, already have such a provision.

According to published reports, the final 2011 state budget was released just minutes before hearings in the House Appropriations Committee. Within 18 hours the entire measure was approved, affecting a wide range of education, social service, business and other issues. Only hours later, the Senate approved it.

John Adler, Arizona’s former state procurement administrator, helped write many of the state procurement rules, and believes they are strong. The problem: “There are 30 exemptions, and they don’t all seem to be justified,” he says.

Besides broad exemptions for the legislature, universities and the judicial branches, which have their own procurement rules, some of the exemptions are for purchases within the agriculture and transportation department, as well as the state lottery commission.

For areas that do fall under the rules, “one can be assured that above-board practices are followed,” Adler says.

Arizona media experts say the state has a strong public access law. There are only three general reasons for withholding a record or some part of a document: confidentiality, privacy, and the best interest of the state. In practice, says attorney David Bodney, a commonsense approach often results in prompt access to public records.

When access is not provided, the state ombudsman’s office can take a complaint from the requester and can mediate or negotiate, but there is no realistic recourse when an agency balks. Bodney and other media law experts say the attorney general can enforce Arizona’s open meetings laws, but not the public records statute.

Bodney feels the state needs an independent official or agency empowered to enforce the public records law. “The attorney general’s office isn’t sufficiently independent” to do so, he said.

There is widespread concern that accountability has suffered in the down economy because fewer people are available to provide oversight in state offices. Like most states, Arizona has cut its budget drastically in the wake of the mortgage meltdown. Since 2008, the legislature has trimmed $3.4 billion in spending, including more than 5,000 state jobs, according to the Arizona Republic.

“In a recession, it’s potentially tough on public access,” Bodney said. He adds that many agency chiefs also know that in tough economic times citizens are less willing to litigate.

Some state agency annual reports show a drop in investigations of citizen complaints. The Department of Insurance’s 2010 annual report says its fraud unit was only able to investigate 89 of the 2,496 referrals received from insurers. That compares to 838 of 2,475 referrals in 2002. “Referrals continue to outpace the

Division’s current resources,” says the report, “so we apply strict investigation guidelines to prioritize cases with the most egregious allegations and/or the highest probability of successful resolution.”

Gregory Harris, a Phoenix lawyer and former assistant executive director at the Arizona Department of Insurance, says the agency is much smaller today due to staffing and budget cuts.

With the 2012 political season in full swing, many worry the U.S. Supreme Court’s Citizens United decision is damaging the transparency of political donations in Arizona.

“The state has put a lot of money and effort in making sure that information about donors is accessible to the public, but today there are workarounds,” said Lee Miller, general counsel for the Arizona Republican Party. A growing number of independent expenditure committees have emerged in the state, he said. This year, when all 90 legislators will be up for re-election, Miller expects there could be 20 or more such committees, depending on the closeness of races or issues.

Arizona Citizens United, an independent expenditure group that registered as a nonprofit with the Arizona Corporation Commission, spent more than $100,000 for radio spots in the recent Phoenix mayoral race supporting the losing candidate, Wes Gullet. Under the new federal rules, its donors were allowed to remain anonymous.