A kayaker in remote Alaskan wilderness during summer. Shutterstock

Why Alaska ranked 32nd of 50 states 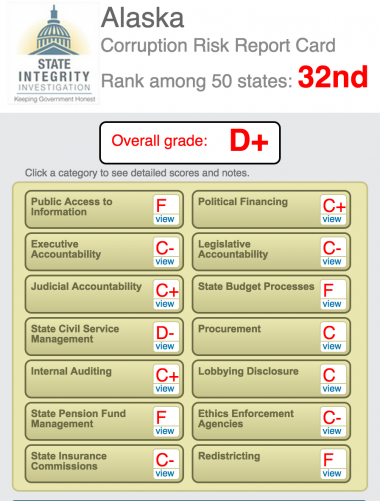 Alaska stretches so far that if you superimposed it on the lower 48, it would go from California to Florida. Its far western island is closer to Tokyo than to the state’s capital, Juneau, and there really is a place in Alaska where you can see Russian land. And it’s got oil – which provides almost 90 percent of the state’s general fund revenue and fattens a savings account that each year presents every resident with a dividend check.

But the oil that has brought so many advantages to the state has also brought with it a hefty dose of corruption.

On August 31, 2006, FB I agents raided legislative offices in Alaska. Backed by warrants from the U.S. Justice Department, they were looking for files, diaries, and any other items showing evidence of financial ties between legislators and the oilfield services company VECO. They were also looking for clothing with the phrase “Corrupt Bastards Club, ”the name a group of legislators had jokingly given themselves. Bill Allen, the head of VECO, was making payments to legislators to get them to vote against higher taxes on oil companies.

The FBI also probed lawmakers’ actions in relation to fisheries and the private prison industry. By time the investigation ended last October, it had resulted in the convictions of six current and former Alaska state legislators on corruption charges, as well as the indictment and conviction of the late U.S. Senator Ted Stevens on seven felony counts of failure to disclose gifts (later tossed out because of misconduct by the federal prosecutors themselves). In addition, there have been guilty pleas by two executives of VECO Corporation to charges of bribery and conspiracy to impede the Internal Revenue Service. Other Alaska businessmen, lobbyists and political figures have also been either convicted or implicated in the scandal.

Legislators and state officials tightened Alaska’s ethics laws and pledged transparency in the immediate aftermath of the FBI raids. But the focus has waned, with ethics bills now struggling in committee and attempts to obtain public records challenged by broad exemptions and loopholes in the law.

And that, say veteran politics-watchers here, is symptom of a larger problem. This state of 723,000 has a history of creating strong laws on access to public records, campaign finance regulation and financial disclosures for public officials. But lack of oversight, court rulings and loopholes carved out by politicians mean there is far less accountability in practice than on paper.

And so Alaska ranks 27th among the states, earning a D+ grade and a numerical score of 68 from the State Integrity Investigation, a joint project by the Center for Public Integrity, Public Radio International and Global Integrity.

Alaska was once a pioneer in open government. The Legislature in 1990 expanded the public records law and took a lead in addressing electronic records. The Legislature declared that “public access to government information is a fundamental right that operates to check and balance the actions of elected and appointed officials and to maintain citizen control of government.” Alaska was also aggressive on campaign finance reform. Under heavy pressure from a looming citizens’ initiative effort, the Alaska Legislature passed a campaign finance reform law in 1996 that was the strictest in the nation for its time.

But times have changed.

Today, state government officials routinely refuse to release public records for vague reasons. Alaska legislators say they don’t need to turn over their records at all. And the state’s strict campaign finance law has been riddled with holes. Alaska still has a law on the books that bans all corporate political contributions to candidates, but it’s been rendered effectively moot by the U.S. Supreme Court’s 2010 Citizens United ruling, which lifted restrictions on how much corporations and unions could spend getting a candidate elected.

The full impact of Citizens United on state-level races has yet to be felt in Alaska. But the potential was demonstrated in the 2010 Alaska Congressional race. Alaska Native Corporations, created four decades ago as part of a law intended to settle land claims and provide economic opportunities for Alaska’s indigenous people, used the court ruling to create a “Super PAC” supporting Alaska Sen. Lisa Murkowski’s write-in campaign for re-election, following her loss in the Republican primary. Post-election disclosures show the group, Alaskans Standing Together, reported raising $1.7 million over 38 days in its successful effort to help Murkowski win her historic write-in effort.

“With unlimited money, any election campaign could become similar to the multi-million dollar ballot initiative campaigns Alaska has seen” said Steve Cleary, who is the former director of the Alaska Public Interest Research Group and helped lead a state campaign finance reform initiative during the mid-2000’s. “Since many races are either uncontested or simply not competitive, large corporate dollars can be focused on a few tight races and really have an effect. I’m not sure what the state rules can do to stop that.” Andrew Halcro, a former Republican state legislator, agreed that Citizens United “makes all the other checks and balances against unregulated loans and soft money to political parties moot.”

Not so public records

Alaska’s release last summer of thousands of emails from Sarah Palin’s time as governor, requested under the state public records law, caused a national media frenzy. While the value of the content of the emails was limited, largely lost in the press hysteria were the major holes in Alaska’s public records system revealed by the process. The episode was a telling example of the difference between the strength of the public records law and the weakness in how it’s practiced.

The fact that the emails were released at all, at significant expense and time to the state, is testament to enforcement of the existing public records law. But the sloppy way it was done, and what was kept secret, has implications for any citizen who wants to know what Alaska government is doing in their name.

The state released 24,199 pages of emails, but not until nearly three years after the initial public records requests were filed. Many of those emails were at least partially blacked out and another 2,415 pages of emails were withheld altogether. Most of the emails for an entire month Palin was in office went missing entirely.

The state’s lawyers made recommendations for what to withhold but the final decision on what to release was up to the office of Gov. Sean Parnell, and involved some of the same people who had worked for Palin and were themselves featured in the emails.

Most of the emails withheld by the state were done so under “Executive/Deliberative Process,” a broad exemption to the Alaska records law that covers internal discussions of policy before a decision is made. This exemption, carved out through court rulings in the late 1980’s and the 1990’s, is commonly applied and vastly weakens the public records law. It’s impossible to know whether the state is applying the loophole responsibly, since the content of the emails in question is kept secret and news organizations nowadays often the lack the funds to go to court and challenge the state’s withholding of information.

The Palin emails were just one example in which “Executive/Deliberative Process” has been used to shut limit efforts to make state information public. Rebecca Braun, publisher of the Alaska Budget Report, a subscription newsletter that comprehensively covers the state Legislature, said “deliberative process” is a favorite among state officials when they turn down her requests for information. The executive branch is at least required to provide some reason for withholding information from the public. The Alaska Legislature exempted itself from the state’s open meetings law, a move upheld by the Alaska Supreme Court in a 1987 decision, and often makes decisions behind closed doors. Legislators have also long claimed that the records of their offices are not subject to public records laws.

The Alaska Public Offices Commission has often struggled to fulfill its mandate of monitoring and enforcing campaign finance and lobbying laws. Then-Gov. Frank Murkowski in 2003 tried to abolish the commission entirely. One state lawmaker described the governor’s proposal at the time as “shooting the watchdog.” APOC survived, but criticism of it continued. APOC was ridiculed as toothless after the federal government stepped in to investigate and prosecute political corruption that appeared to be going on under the nose of state authorities. The Legislature has shown no inclination to cut APOC staff in recent years, though, and has been funding the slow process of the commission’s switchover to electronic filing of records.

And APOC is showing signs of being aggressive with investigations and fines For example, two years ago the commission reached a $100,000 settlement with groups fighting development of a massive mine near streams that feed rich runs of salmon in Bristol Bay. Regulators accused the groups of hiding the fact that an Anchorage businessman with a home near the proposed mine was the source of $2 million in funding for a ballot measure.

There’s still a gap between the laws and what APOC can actually accomplish, however. One glaring example is the financial disclosures public officials are required to file to show whether there is any conflict between their personal finances and the actions they take on behalf of the state. APOC has conceded in the past that a large percentage of the financial disclosure forms filed by state legislators lacked some required information, for example, but that it doesn’t have the staff to track it all down.

The agency has to deal with campaign disclosures, legislative disclosures, lobbyist disclosures, public official disclosures and various lobbying reports. “There are only 14 staff members with APOC and we have a couple thousand reports to go over,” APOC Executive Director Paul Dauphinais said. He added that the situation should improve as APOC moves to electronic reporting over the next year. That will free up staff time that’s now going to data entry of reports, and the system will automatically catch basic errors with math and other issues.

Dauphinais said APOC doesn’t only do random audits but that the agency keeps no list of the audits that it has done. He agreed such a list would be useful and said APOC is trying to step up audits. “We’re not going to get them all,” he said, “but we do the very best we can.”