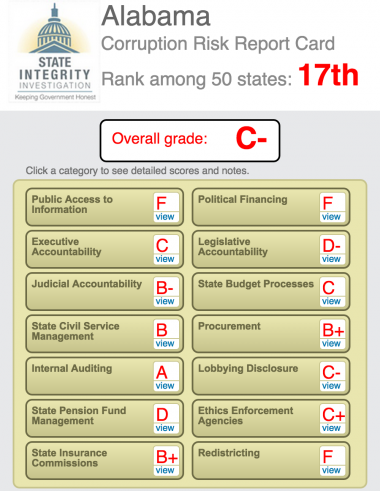 For years the world has witnessed Alabama through a bleak lens:

And, the unkindest headline of all: Alabama’s new immigration law revives memories of water hoses and dogs used against civil rights marchers.

But now, led by a reform minded governor and legislature and buoyed by a spate of legislative reforms, Alabama has taken strides to shed its past. The state has approved new investigative subpoena powers for its Ethics Commission, limited spending by lobbyists and pushed to make financial disclosure and other information more easily searchable online.

Yet ethics reform in this state of 4.8 million residents remains a work in progress. And so Alabama receives a letter grade of C- and a numerical score of 72 from the State Integrity Investigation, ranking it 15th among the states. Not the bottom of the rung rating of the earlier headlines, but not yet near the top, either.

The study evaluated factors ranging from the public’s access to information to political financing rules to ethics enforcement.

Interviews with more than 40 public and private sector experts suggest that Alabama’s ethics protections are pointing more toward a modern, efficient government than its history suggests.

Republican Bentley’s only previous political experience was two terms as a non-controversial legislator representing the district that includes his hometown, Tuscaloosa.

He’s never been the typical politician. First, he made a campaign promise that if elected he would not take a salary until the state reached full employment (5.2 percent unemployment; the state presently sits at 8.1 percent). Second, when he learned from the state Attorney General that contributions to his campaign by several corporations had exceeded the $500 legal limit, Bentley returned the entire contribution, not just the overage.

“If I have any question about whether anything I’m thinking about doing would conflict with the ethics law,” the governor said, “I just pick up the phone and call Jim.”

The “Jim” is Ethics Commission Director James L. Sumner Jr. With the help of both lame-duck governor Bob Riley and Bentley, Sumner pushed through ethics changes that have lobbyists scrambling to find out how much and under what circumstances they can wine and dine. Sumner, Ethics Commission director since 1997, called the changes in the state’s ethics law “a momentous day” for Alabama.

Year after year, Sumner went to the Legislature with his “Wish List” in hand – only to be largely ignored by a Legislature comfortable with the traditions of Goat Hill – the nickname for the State Capitol because it was built on land where goats once grazed. Disappointed but not discouraged, he would return a year later with an updated list.

On December 8, 2010, outgoing governor Riley convened a Special Session on Ethics Reform – his chance to leave a legacy in state government.

When Sumner brought forward his wish list this time, the stars aligned. Ethics reform, a front-burner issue in all states following the Watergate scandal of the 1970s, was again a hot topic in Alabama.

Sumner got most of what he proposed; then, in the first session under new governor Bentley, he got much of the rest.

Alabama has had an Ethics Commission since 1973 but lacked several key provisions. In 2010 and 2011, legislators adopted safeguards that will:

• Drop the limit on what lobbyists (or anyone trying to influence government action) can legally spend on public officials to $25 per occasion and $150 a year for each official; limits for principals (lobbyists’ employers) dropped to $50 per event and $250 per year. Alabama previously allowed $250 a day for wining and dining per official.

• Require lobbyists calling on the executive and judicial departments to register.

• Require most public officials, public employees and lobbyists to be educated on the ethics law. Despite Sumner’s crisscrossing the state to conduct over 800 ethics seminars with over 50,000 attendees, people still come before the commission without any ethics training.

• Authorize creation of a fully online and searchable database of the commission’s records, including public officials’ and employees’ financial disclosure forms and lobbyists’ annual registrations and quarterly reports.

• Make it easier for the Ethics Commission to launch an investigation, requiring a vote of four commissioners, not five.

The reform push encountered some resistance. But “we have worked hard to establish a new norm, and as the new norm settles in, everyone is discovering that life goes on,” Sumner said.

Another player in the press to change Alabama is not a person but a group – the state government bureaucracy. As Democrats jumped ship to become Republican to get elected in a state that turned bright red in national elections, most of the state’s bureaucracy stayed put.

The state’s bureaucracy soldiered on, largely unchanged. Some heads of major state departments have been in place for three decades.

Some suggest developing two strong political parties, not just one, would trigger a deeper system of checks and balances. Others say the public must become more active.

The history Alabama seeks to shed is not so distant in the past.

• Syracuse University’s Maxwell School of Citizenship and Public Affairs ranked Alabama “worst governed state in America” not once but twice, in 1999 and again in 2001. The study cited worst practices in finance, management, planning, taxation and information technology.

• Don Siegelman, the state’s last Democratic governor, entered office with widespread support and high expectations. Leaving office in 2003 under a cloud of suspicion, he was convicted in 2006 of several corruption charges, including bribery. Some observers, including a majority of the nation’s attorneys general, believe Siegelman may have gotten a raw deal and support his appeal for a new trial.

• Gambling promoter Ronnie Gilley, proprietor of a bingo palace in Dothan, Ala., confessed to buying a legislator’s vote. He said he had been “naive about the corruption in Alabama politics.” The Enterprise native capitalized on Alabama’s soft campaign disclosure requirements to secretly funnel funds from 40 corporations in which he held an interest into the campaign of a legislator whose vote he sought.

The new ethics law can help put Alabama on the right track “especially if Mr. Sumner is vigorous in enforcement as he seems to have every intention of being,” said William H. Stewart, a retired professor and former chair of political science at the University of Alabama.

What is more important, Stewart said, is developing a better-educated, more activist public.

“As a relatively poor, under-educated historically agricultural state, Alabama does not have the watchdog groups found in other states which have been urbanized and industrialized for longer periods,” Stewart said. “[And] the Alabama political culture has encouraged citizen passivity as far as what is going on in government is concerned.”