Asphalt pavers widen a Washington state highway. Engineering controls developed through an industry, labor and government partnership have reduced fume emissions in the breathing zones of workers by about 80 percent. Courtesy of the National Asphalt Pavement Association

Major reform would take an act of Congress, but improvements are possible now

More from Unequal Risk
A series examining the epidemic of work-related disease in America.
Part One: Toxic substances kill and sicken tens of thousands each year as regulation falters.
Part Two: The risks unborn children face from their parents’ exposures.
Part Three: The struggles that have plagued the Occupational Safety and Health Administration (OSHA) since it opened its doors 44 years ago.
Additional stories will appear later this year.

The country’s safeguards against toxic workplace exposures are dangerously weak, but they don’t have to stay that way.

The Occupational Safety and Health Administration takes years, sometimes decades, to develop rules for individual chemicals and other hazardous substances. That’s why most of the agency’s exposure limits haven’t been updated since 1971, and why the vast majority of chemicals have no workplace limits at all. It’s part of the reason that an estimated 50,000 Americans die from job-related illnesses each year.

Sweeping changes would require action from Congress, given how courts have interpreted what OSHA must do to set chemical limits. The agency could wait a long time for such assistance — Congress sometimes intervenes to make the process even harder.

But OSHA, employers and worker advocates can make strides against workplace disease and death right now. Here are some of the ways:

Workers in America face risks from toxic exposures that would be considered unacceptable outside the job.

OSHA sets exposure limits one chemical at a time, each with a long-slog rulemaking. As a result, it’s a rare substance that has an up-to-date limit in the U.S., and setting one can trigger “regulatory Whac-a-Mole,” as OSHA chief David Michaels puts it, with some companies turning to substitutes that have no legal threshold.

OSHA already tried updating many standards all at once, in 1989. A federal court ruled three years later that the abbreviated analyses the agency did weren’t sufficient.

But nothing’s stopping OSHA from regulating an entire industrial process, said Adam M. Finkel, who directed the agency’s health standards programs from 1995 to 2000. By setting standards for operations such as welding or dry cleaning, OSHA could reduce exposures for a variety of substitutes an employer might use, he said.

He suggested that idea to OSHA in the 1990s, and the agency included it in a list of possibilities released last year in a request for help to fix its bogged-down standard-setting process. Regulating chemicals by characteristic — for instance, the type of hazard — is also on the list.

Another thought kicked around over the years: Avoiding long fights by getting industry and labor on the same page. Finkel said he asked representatives from both sides in the mid-1990s whether they’d agree to live with the result if they helped set the ground rules. (Answer: Nope. But he thinks it could work if OSHA championed it.) When the American Industrial Hygiene Association got industry and labor groups to the table not long after, participants talked about asking for an OSHA advisory committee — with members drawn from both sides — that would hammer out recommendations for exposure limits in at least some cases.

“You could start with the noncontroversial ones and you’d build confidence in the process,” said Frank White, a senior official at OSHA in the 1980s.

Basing standards on what outside parties can agree on could run afoul of OSHA’s requirement to protect workers from significant risks with the lowest feasible exposure limits. Finkel, now at the University of Pennsylvania, sees a workaround: Make such agreements “enforceable partnerships” instead of standards and hold signers accountable.

There’s also the tack the United Steelworkers and beryllium producer Materion tried for that metal, which can trigger a potentially fatal lung disease. The two sides developed a recommended standard for the substance in hopes of speeding up OSHA’s efforts to enact its own rule. (The agency sent a proposal to the White House’s Office of Management and Budget for vetting last September. It’s still in review.)

Why wait for a rule? The asphalt industry offers a model for cooperating to protect workers in the absence of specific requirements.

As concern heightened that asphalt fumes might cause cancer, OSHA proposed a standard in 1992. Nothing has come of that. But industry and labor representatives helped fill the gap even though they didn’t see eye-to-eye on the science.

It started with an idea in the 1990s from the National Asphalt Pavement Association: Why not adjust the paving equipment? To introduce a system that could protect workers and be widely adopted, trade group members decided to cooperate with labor and government. Soon, they were meeting regularly to develop paver ventilation systems that would keep fumes away from workers.

“There needed to be a paradigm shift,” said Mike Acott, president of NAPA, which represents asphalt producers, paving contractors and equipment manufacturers. “I would go to meetings, and it just seemed like we all wanted roughly the same thing.”

Dr. Jim Melius, director of research for the Laborers’ Health and Safety Fund of North America, was involved from the start. “The usual approach would be that we would go complain to NIOSH” — the National Institute for Occupational Safety and Health — “and OSHA and demand that studies be done, and industry would fight that,” he said. “But we thought we could work together. There were some pretty practical, straightforward solutions that could be applied.”

Manufacturers designed engineering controls that NIOSH tested, and by the mid-2000s, virtually all U.S. pavers had such technology to keep fume exposures below recommended levels.

The partnership opened the door to larger, industry-changing collaborations. Among them: development of lower-temperature asphalt mix that’s safer — and cheaper, too.

Workers wouldn’t need so many protections from chemicals, toxicologists say, if the U.S. had a good system for policing what’s safe for use. OSHA standards are the equivalent of chasing horses around the field after a massive barn escape.

“Chemicals need to be tested and they need to be monitored before they enter the market,” said Julia Quint, a toxicologist who ran California’s Hazard Evaluation System and Information Service before retiring in 2007. “Once they enter the market, it’s very hard to control them. … Consumers, workers, some small employers and others assume that they’re OK, why would they be on the market if they’re not OK … and then all of a sudden, it’s like, ‘Oh, no, it causes cancer.’”

Reforming the system is a big fight, as the battle over the federal Toxic Substances Control Act illustrates. So what can companies do now? OSHA has a guide for firms (and workers) looking for safer alternatives to the chemicals they use, often dubbed “green chemistry.”

Pick up the pace

Even if new methods for setting health standards catch on, OSHA probably will need to address certain substances one by one. Doing so more expediently is critical.

The court decisions that require substantial analyses before OSHA can propose health rules were largely handed down in the 1980s. The last major one that spoke to the issue came out in 1992. And yet the agency managed to enact 11 health standards that decade. In the decade and a half since then? Just four, only one of which involves chemical exposure limits. Some of the delays, say former agency officials, are OSHA’s to control. 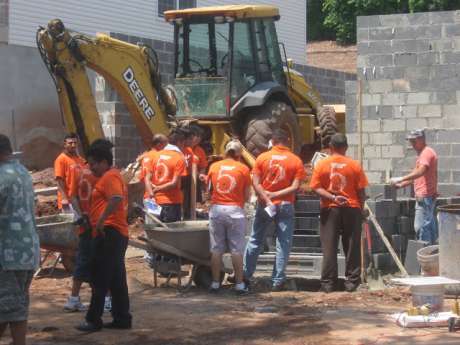 Construction workers in their role as safety liaisons confront an employer about working conditions at a New Jersey job site.

People who know what’s unsafe can avoid hazards and advocate for their own health. That’s why New Jersey worker-rights center New Labor recruited a group of day laborers in Newark to become “safety liaisons” in 2009. The workers trained in occupational safety practices and laws, then built up the courage to demand safe working conditions despite their concerns that speaking out might cause trouble for them.

Safety liaison Selvin Trejo joined the program four years ago, shortly after emigrating from Honduras and starting work in construction. “You begin to learn that you have rights in this country like anyone else,” he said. “That we have a right to dignified work and a dignified salary, and a job that’s free of hazards.”

The liaisons teach monthly safety classes and go to day-labor hiring spots in the mornings to help educate workers on their rights. Liaisons tell their employers and co-workers about the protections they need, sometimes reporting job sites to OSHA or refusing to work when a boss won’t fix hazards. They say they’ve seen results.

“We are the eyes and ears of our own circumstances,” said New Labor Executive Director Lou Kimmel. “So we should monitor them, knowing that OSHA can’t always be there for us.”