The Federal Communications Commission handed Verizon Communications Inc. and AT&T Inc. a victory Thursday when it agreed on a plan to auction valuable radio signals next year that will allow the two giant carriers to bid on most of the frequencies expected to be up for sale.

The agency was under pressure by consumer groups and smaller wireless carriers such as T-Mobile Inc. and Sprint Corp. to cap the amount of spectrum the wireless giants could buy so as to ensure competition in the industry.

The commissioners voted 3-2 along party lines to reserve just part of the airwaves being auctioned for small wireless carriers, rather than establishing a hard cap on how much spectrum Verizon and AT&T can purchase.

The airwaves that will be sold are those now held by broadcast TV stations in the 600 megahertz range, so-called low-band spectrum that is highly coveted because it can travel long distances and penetrate buildings, characteristics that make it ideal for wireless devices

The FCC plans to run a reverse auction to determine how much broadcasters are willing to sell their airwaves for. No one knows how many broadcasters will sell.

At stake is who will ultimately control the public’s wireless access to the Internet, on which all kinds of data — from medical records and bank transactions to Amazon purchases and movie downloads — travel from providers to smartphones and tablets.

The Center for Public Integrity reported on the upcoming spectrum auction in March.

Verizon and AT&T, which count two-thirds of all U.S. wireless subscribers as customers, control about 74 percent of the low-band spectrum, below 1 gigahertz. If the companies buy more in the 600 megahertz band, wireless experts believe the companies will have an unfair competitive advantage against Sprint Corp., the third-largest wireless carrier, and T-Mobile USA Inc., the fourth largest.

If Sprint and T-Mobile aren’t able to buy enough low-band spectrum in next year’s auction, they may be forced to merge to compete, putting upward pressure on wireless prices and stifling innovation.

Sprint owns licenses for about 12 percent of the low-band spectrum, and T-Mobile owned less than 1 percent before it recently purchased a small amount from Verizon. Most of T-Mobile’s and Sprint’s frequencies are in the higher bands.

“I don’t think the commission went far enough,” said Harold Feld, a senior vice president at Public Knowledge, a consumer advocacy group in Washington that wants to limit how much spectrum each carrier can purchase.

Feld said the commission should have been “more aggressive” in reserving spectrum for smaller carriers.

Feld said the amount of spectrum allocated to smaller carriers will depend on how much is put up for auction by the broadcasters. The first 40 megahertz — or about half of what’s likely to be available — will be completely unrestricted. The more spectrum made available, the more will be reserved for Sprint, T-Mobile and upstarts.

“The FCC has to promote effective competition and public safety,” said agency Chairman Tom Wheeler before the vote. “To promote competition in rural America, carriers must have access to low-band spectrum. We want to make sure there is competition in rural areas. Likewise public safety demands that when you make a 911 call inside buildings, you don’t want to be stuck with a subscription to a wireless carrier that doesn’t allow you to penetrate those walls.”

These maps show the U.S. counties where AT&T Inc., Verizon Communications Inc. and T-Mobile USA Inc. have, or will have, low-band frequencies. The signals are considered valuable — much like beachfront property — because they travel longer distances and penetrate buildings better than higher band frequencies. T-Mobile and Sprint Corp. say they need more low-band spectrum to compete with their larger competitors. They want the FCC to limit how much of this spectrum AT&T and Verizon can purchase during an auction next year.

The bright pink areas on the T-Mobile map indicate low-band frequencies the company already owns. The light pink shows areas where T-Mobile has agreed to buy spectrum from Verizon in a deal expected to be finalized this year. 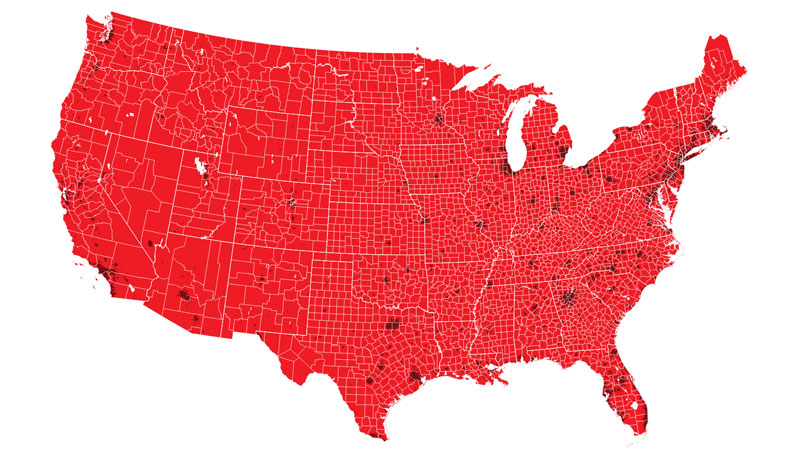 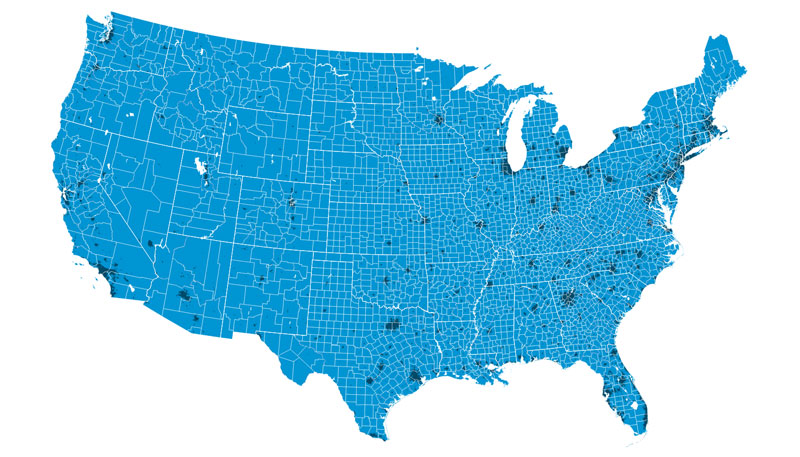 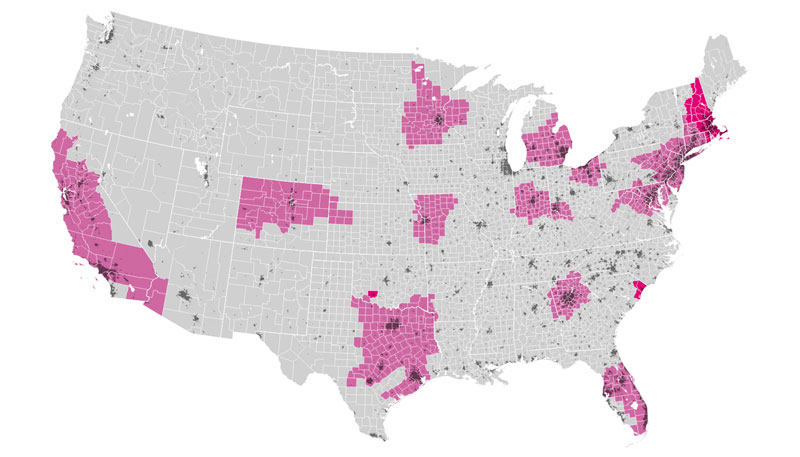 The FCC’s two Republican commissioners, Ajit Pai and Michael O’Rielly, wanted no limits on how much spectrum carriers could purchase.

AT&T and Verizon dominated the last low-band auction, buying the vast majority of available spectrum. The concern is that will happen again.

Feld said whether the small carrier rules will be enough to create competition in a concentrated wireless market won’t be known for at least five years.

“That’s when we’ll know whether the competing companies have enough of a way forward to get the spectrum they need to stay viable, or they don’t and they need to sell out,” he said.