2. The Department of Housing and Urban Development (HUD) sells mortgages to investors at a steep discount — at times as little as 41 percent of the mortgages’ collective value.

3. Homeowners typically aren’t informed when their mortgages are sold. This prevents them from advocating for better terms, which they’re entitled to under Federal Housing Administration protection. 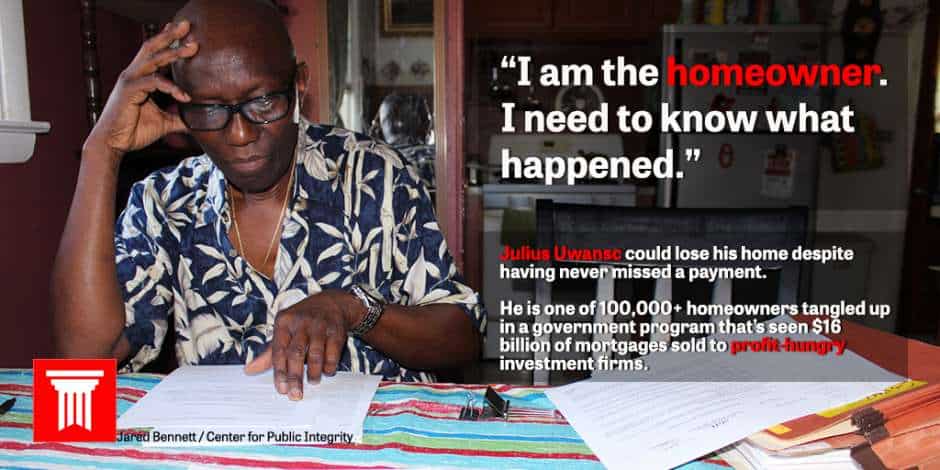 4. Wall Street investors pay only two-thirds* of the full mortgage value when they buy mortgages from the government (*median price).

5. Homeowners aren’t so lucky: they must pay about 124 percent* of the property value to keep their homes (*median price).

6. HUD sells the mortgages in bundles as large as 5,944 loans. HUD designed the program to include nonprofits and community organizations, but the size of the bundles means large, institutional investors have a leg up in blind auctions. Currently only 2 percent of sold mortgages go to nonprofits.

7. HUD’s mortgage sales program is meant to help distressed homeowners avoid foreclosure. But rather than offering better terms to borrowers, the new owners of these homes often flip them for a profit, advocates say.

8. Only 16.9 percent of the mortgages HUD sold to investors between 2010 and 2013 have avoided foreclosure.

9. Of those 16.9 percent, less than a third are performing, and over 10 percent have either sold through a third-party sale or been handed over through a deed-in-lieu, still resulting in a homeowner without a home.

10. Even if a home isn’t foreclosed, there’s a high chance that the homeowner will lose their house anyway. According a Center for Public Integrity analysis of address data, Bayview Loan Servicing, LLC, took ownership of 1,319 properties. Other beneficiaries: JP Morgan Chase: 841 properties. Bank of America: 639.

11. Many homeowners say they were still involved in renegotiating their loans while their mortgages were sold to investors. HUD’s own rules state the lender can only turn the loan over to HUD for sale once all efforts to keep homeowners in their home are exhausted.

Read the investigation for the full story. Then tell us what you think in the comments section below.

Hedge funds get cheap homes, homeowners get the boot