This story is a collaboration between the Chicago Tribune and the International Consortium of Investigative Journalists, led by the Tribune. The article is part of the series “Fugitives from Justice,” which exposes the flaws of the international fugitive apprehension program in the U.S. Tribune reporters Gary Marx and David Jackson tracked more than 200 fugitives charged with murder, rape and other serious felonies who evaded trial simply by fleeing U.S. borders. 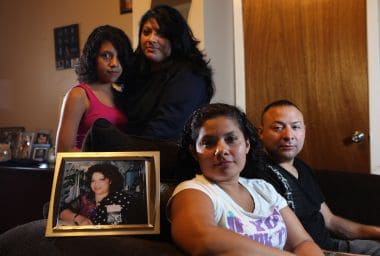 U.S. authorities have located international fugitive Kyung Ho Song in his native South Korea, more than a decade after he fled Illinois to avoid being tried for drunken driving and reckless homicide in an accident that killed a 43-year-old single mother.

The search for Song was reactivated last spring after the Chicago Tribune contacted prosecutors and police about the dormant case. Even though U.S. authorities discovered Song’s location in December, they have yet to formally request help from South Korean officials, and it is not clear when or if Song might be extradited back to Illinois.

His case provides another glimpse into the gaps and lack of coordination in the criminal justice system that allow border-crossing fugitives to avoid prosecution.

Law enforcement officials would not comment on why there was no progress in the case for so many years, but one official suggested that it languished because of a lack of communication among the police, county prosecutors, federal agents and Justice Department officials. All played some role in pursuing Song, but none seemed to take stewardship of the extradition effort and push the case.

The Tribune’s “Fugitives From Justice” series, an examination of more than 200 international fugitives cases from northern Illinois and thousands more nationwide, spotlighted Song’s case in November. Tribune reporters then teamed up with the International Consortium of Investigative Journalists to try to locate Song.

Independent of authorities, Tribune and ICIJ reporters in recent weeks found Song in a glass and concrete high-rise apartment in Yongin, a quiet residential suburb about an hour and half’s drive from the capital city of Seoul.

During four interviews, the once-prosperous shoe store owner, who is now 73, bemoaned how his life had unraveled since his flight.

“I am such an unlucky guy,” Song said.

Brenda Molina, the daughter of Song’s alleged victim, said she was stunned that Song could be found by reporters and outraged that authorities had waited so long to act.

As in many of the cases, the victim was an immigrant — in this case from Ecuador — whose family did not have the clout or the know-how to press for justice.

Remembered as a high-spirited woman who liked to play bingo and dance, Sonia Naranjo worked as manager of housekeepers at a suburban hotel. She was heading to a casino with three friends in October 1996 when their station wagon broke down just after midnight on a well-lit stretch of Lake Street just west of Route 59 in Bartlett.

Song’s white Oldsmobile plowed into them from behind as they tried to push their car to safety, according to police records. Police found Naranjo crumpled against Song’s front bumper, and she was dead on arrival at an Elgin hospital, while one of her friends was severely injured, records and interviews show.

Song had no significant injuries, just a slight discoloration and swelling on one lip. But he had red, bloodshot eyes and smelled of liquor, a police report said.

Song later presented himself to the court as a modest, $12,000-a-year shoe store manager and was released after putting down a $2,500 bail bond deposit.

In fact, Song co-owned a strip mall, a large Schaumburg home and Chicago commercial property worth a total of more than $1 million, the Tribune’s subsequent investigation found.

After Song was charged, he worked with his wife to liquidate those assets. Then, in 1998, he withdrew his guilty plea to reckless homicide and aggravated driving under the influence and absconded to South Korea, government records show.

On the evening of the accident, Song said in the interview, he had “a couple of shots of Korean liquor” with friends before climbing in his car.

But Song denied being drunk, even though a Bartlett police breath alcohol test taken more than an hour after the accident showed his blood alcohol level was nearly twice the legal limit, according to court records.

Recounting the crash, Song said he “didn’t even realize they were hit. Then the lady died. It was an accident. I blame my unfortunate fate.”

“My life changed upside down since then,” Song said.

Since fleeing to South Korea, Song has worked intermittently as a school janitor, earning roughly $700 a month, and lived in an apartment funded in part by a relative, according to interviews in South Korea.

After liquidating his assets, Song claimed he was able to give his wife about $80,000 and his son in Chicago $50,000 and used $70,000 to pay the Chicago lawyer who defended him in court and helped him execute the financial deals before he fled.

But Song also had ready cash when he landed in South Korea. In the interview, Song asserted that when he arrived, “I only had about $100,000 in my hand.”

Song said a wealthy nephew put him up in an apartment in Chungju, southeast of Seoul, for a year and a half. Then, Song said, he put down $70,000 and his nephew another $125,000 to buy him the apartment where he now lives in Yongin.

A reporter located Song in February, though at first he would speak only through the closed door, asking, “Why are you interested in the incident that happened 15 years ago?”

Song later called the reporter and agreed to meet, but he insisted on a cafe about two hours by subway from his home.

Wearing a black hat and thick down coat, Song looked anxious and frail as he sipped coffee and offered a guarded account of his life and the accident.

“It is the incident I don’t want to remember at all,” he said.

The night before that cafe interview, Song said, “I couldn’t sleep. I thought about jumping off my apartment balcony and killing myself.” But, Song said, “when I think about my children, I couldn’t. I have already disappointed them, and if I commit suicide, I am burdening them even more.”

Song said he is now retired and has not worked since last year. “I am an old guy; no one wants to hire me,” he said.

Song said no authorities have come to look for him in South Korea since he fled the United States.

In 2003, the U.S. Justice Department filed a warrant for Song, saying he had phoned U.S. authorities to tell them he was living permanently in the Sungdong-gu district of Seoul and to inquire about his immigration status.

Song said it must have been a relative who called on his behalf. He asserted he has “never called the U.S. immigration office, never applied for the green card, never thought about going back to the United States. I was and am still scared that they would find me and catch me.”

The South Korean immigration office’s records also show he has not left the country.

The FBI located Song in December, and Cook County prosecutors then asked the Department of Justice’s Office of International Affairs to submit an arrest request to South Korea. It will ultimately be up to South Korean authorities to arrest Song.

The Cook County state’s attorney’s office said Justice officials have not yet sent the request to South Korean authorities but have indicated they intend to move forward.

“We want him, and the case is strong,” said Fabio Valentini, criminal division chief of the state’s attorney’s office.

Although Song and his wife divorced in Chicago before he fled, other Chicago business and court records indicate that they continued to live together, bought property and secured a business loan as husband and wife.

In his interview, Song said the divorce was genuine and that he and his wife had fought for years. “I used to drink a lot in Korea, and we used to argue over my drinking habit,” he said.

Song added that his daughter-in-law had divorced his son because she “couldn’t stand the fact that her father-in-law is a criminal.”

Song said that from time to time, he talks to his three adult children, who all live in the U.S., but they don’t visit him in South Korea. “Why would they? They are ashamed of me,” he said.

Song, who was a member of a Korean-American Presbyterian church in Elk Grove Village, had few words for those killed and injured the night of his car accident but said: “I know I committed a sin. I go to the cathedral and pray for the victims every day.”

Brenda Molina, who was 23 when she lost her mother, penned a two-page letter to Song’s judge that still sits in the Cook County criminal court file.

“Mr. JUDGE when I found out my mom had past (sic) away, I wanted to die,” Molina wrote. “When I saw my mom laying in the coffin, I felt so bad. I was going crazy, I was screaming, crying, yelling, saying to my mom to wake up.”

Molina continued: “We’ve lost the best thing we had in this world (OUR MOM). We all wanted to go with her, so she won’t be cold any more, because her hands were so cold.”

*David Jackson and Gary Marx are Tribune reporters. Nari Kim, a reporter for South Korea’s Channel A, is an associate of the International Consortium of Investigative Journalists, a project of the Center for Public Integrity. Her work on this story in South Korea was funded by a grant to ICIJ from The Richard H. Driehaus Foundation.

On anniversary of Virginia Tech shooting, law to close loophole hasn’t accomplished much