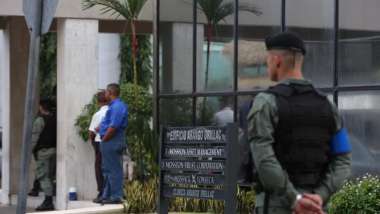 Panama’s national police raided the Panama City headquarters of law firm Mossack Fonseca late Tuesday, looking for evidence that “would establish the possible use of the firm for illicit activities,” as they said in a statement.

The police, under the direction of prosecutor Javier Caravallo, who specializes in organized crime and money laundering, surrounded the headquarters building and raided other branches as well. According to the Financial Times, the operation was still underway eight hours after it began.

The action was part of the continuing fallout from publication of the Panama Papers, an investigation into 11.5 million documents spanning 40 years of operations by the firm, one of the world’s largest wholesalers of shell companies. Usually set up in a manner that makes it hard to know who controls them and existing almost only on paper, shell companies may be used for lawful purposes but have also figured frequently in money laundering, tax evasion, bribery, drug dealing and other crimes.

“We’re the ones against whom a crime has been committed,” the law firm said in a statement published on its website. It added that the company is “ready, willing and eager to cooperate with authorities.”

The raids came at a time when Panama’s President Juan Carlos Varela has taken several actions in response to the revelations about the firm, whose co-founder Ramon Mossack was one of his top advisers until his recent resignation.

Earlier in April, Varela announced the creation of an international panel to improve transparency in Panama’s economically important offshore financial industry. He also published an op-ed piece in the New York Times, decrying the emphasis on Panama which he said “does not deserve to be singled out on an issue that plagues many countries,” adding that Panama is “willing to accept the responsibility for fixing it, in part because greater transparency is ultimately a continuation of reforms we have recently undertaken.

On Tuesday before the raids, Panama warned France that it would take unspecified diplomatic measures if Panama is not removed from a blacklist of tax havens.

Read more at the International Consortium of Investigative Journalists.