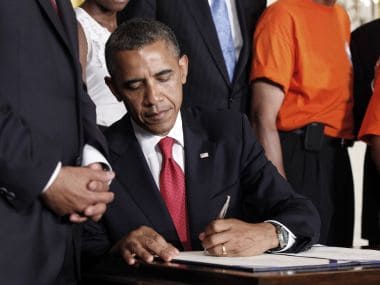 FILE – In this July 6, 2012 file photo, President Barack Obama signs the Surface Transportation Bill, in the East Room of the White House in Washington. A new law reduces by billions of dollars what companies have to contribute to their pension funds, raising concerns about weakening the plans that millions of Americans count on for retirement. But with many companies already freezing or getting rid of pension plans, critics are reluctant to force the issue or even make much of a fuss. (AP Photo/Pablo Martinez Monsivais, File)

WASHINGTON (AP) — A new law will let companies contribute billions less to their pension funds. And some people are concerned that that could weaken the plans millions of Americans rely on for retirement.

Yet with numerous companies already dropping or curtailing their pension plans, many of the same critics say it is even more important to avoid giving firms a reason to limit or jettison remaining pension benefits by forcing them to contribute more than they say they can afford. Some also say the changes will probably have little impact on the enormous $1.9 trillion in estimated pension fund assets.

The concerns underscore a harsh reality for unions and consumer advocates: When it comes to battling over pensions, the fragile economy of 2012 gives the business community a lot of leverage.

Report: Some lose homes over as little as $400