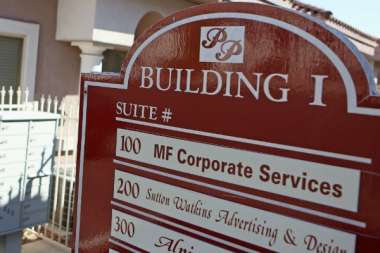 A sign for M.F. Corporate Services (Nevada) Limited is shown outside a buisness complex in Las Vegas.

Panamanian law firm Mossack Fonseca’s local affiliate in Nevada has resigned from more than 1,000 companies and paid a penalty to the state, while the law firm has also announced the closure of three of its international offices as the fallout from the Panama Papers investigation continues.

Nevada’s Secretary of State Barbara Cegavske announced in a statement on Monday that M.F. Corporate Services (Nevada), Mossack Fonseca’s local affiliate, had paid a $10,000 fine for failing to keep the required records and contact details for its clients. The penalty is the maximum allowed under the state’s laws.

Cegavske’s statement also revealed that the firm had abruptly resigned as registered agent from the 1,024 companies it administered in the state, a move that one expert told ICIJ partner McClatchy was “absolutely unusual.”

Mossack Fonseca’s operations in Wyoming, which were also operated out of the Nevada office, also faced a significant setback when its local Wyoming business partner cut all ties last week, leaving M.F. Corporate Services Wyoming with 60 days to find a new registered agent in the state, or face dissolution by the Wyoming Secretary of State’s office.

Beyond the U.S., the firm has announced the closure of three of its offices, and faces investigations in multiple jurisdictions.

On Wednesday, it was reported that Mossack Fonseca said it would close its offices in Gibraltar, Jersey and the Isle of Man, citing the international attention drawn by the Panama Papers as one of the reasons behind the decision.

In Panama, the firm has liquidated its financial services arm, named Mossack Fonseca Asset Management S.A., and applied for a cancellation of its license. The business division was used by Mossack Fonseca to help clients invest their money, and has been under investigation by Panama’s securities regulator over its fulfilment of due diligence requirements.

Mossack Fonseca has also faced enforcement action from the British Virgin Islands’ financial regulator and remains under investigation. The firm has been ordered by the authority to appoint a “qualified person to oversee its operations and to provide regular reports” according to ICIJ partner the Guardian.

The law firm and its clients have been under investigation in a number of countries after ICIJ, German newspaper Süddeutsche Zeitung and more than 100 media partners published the Panama Papers investigation, revealing the secrets of the shadowy world of offshore finance.

In the wake of the controversy, Panamanian authorities raided Mossack Fonseca’s headquarters and pledged to boost the transparency of its financial services industry and to cooperate with investigating authorities from around the world.