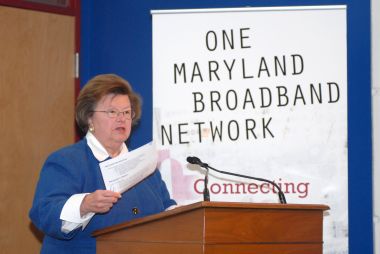 Sen. Barbara Mikulski, D-Md., head of the appropriations subcommittee that funds the Legal Services Corp. (LSC), said she is outraged that the government’s main program for providing legal help to impoverished Americans still suffers from poor oversight that leaves it vulnerable to being defrauded by the nonprofit groups it funds.

“The LSC’s mission is to level the playing field for those who cannot afford legal aid. Instead, what we’ve seen in recent years are several cases of perpetrating fraud with taxpayer’s money,” Mikulski told the Center for Public Integrity.

The senator was reacting to a Center report on Wednesday that cited major criminal cases brought in the last four months in which executives of three legal aid nonprofit organizations were charged with or pleaded guilty to stealing federal funds and using them for such activities as gambling and prostitution. One of the most egregious allegations involved a nonprofit legal aid group in Mikulski’s home state of Maryland.

The Center’s story quoted the federal legal aid program’s chief watchdog, Inspector General Jeffrey E. Schanz, as well as a new Government Accountability Office report questioning the corporation’s ability to oversee the hundreds of millions of dollars a year it gives to nonprofits to help poor Americans get help in civil law matters.

Mikulski sent a letter to LSC’s management the same day the Center’s story was published, asking why LSC hasn’t completed fixes it promised to make in 2007 and still suffers from weak oversight of the money it gives to grantees.

“I am outraged by the Legal Services Corporation’s continued pattern of failure to oversee its grants,” Mikulski wrote LSC Board Chairman John G. Levi and Acting President Victor M. Fortuno.

Noting that the deep recession has left more needy Americans than ever, the Democratic senator wrote she has been a champion of federal legal aid and “America needs LSC now more than ever.

“But I am not on the side of bureaucracy that fails to provide effective oversight of taxpayer funding,” she wrote.

LSC has said its Office of Compliance Enforcement and its Office of Program Performance are making steady progress on better monitoring of money given to the 136 independent nonprofits that carry out the legal aid work at the local level. The GAO report, however, cited continuing internal control weaknesses and “deficiencies” in the ability of LSC’s enforcement and program performance offices to oversee the grantees.

Mikulski told the Center she is putting her faith in the agency’s independent inspector general to help root out fraud, given the problems LSC’s own offices have had in overseeing grants.

The inspector general’s investigators have “the tools – and have been using them – to ensure that LSC steps up and responsibly manages its money, but there’s obviously much more oversight that needs to happen to end lavish and excessive spending practices,” she said.

In a letter to the Center after its story was published, Fortuno said he believed the story overreached in making a connection between the internal weaknesses cited by GAO and the fraud cases. “The article overreaches,” Fortuno wrote.

The GAO, however, in a 2007 report that first cited the legal aid program for poor oversight of grant recipients, directly warned that internal control weaknesses left the agency vulnerable to fraud.

“Internal controls serve as the first line of defense in safeguarding assets and preventing and detecting errors and fraud,” that report concluded.

Sen. Charles Grassley, R-Iowa, who requested the GAO audits of LSC, said the problems uncovered in those investigations have a direct bearing on the program’s ability to police against fraud. “Regardless of the organization, weak internal controls, coupled with a lack of routine independent monitoring, invite trouble when it comes to safeguarding resources,” he said.

The GAO said in its report this week that six of the 17 recommendations from its 2007 report haven’t been fully implemented. LSC spokesman Steve Barr said Friday the agency believes it has completed all the 2007 recommendations but is awaiting the GAO to check documentation to confirm that.