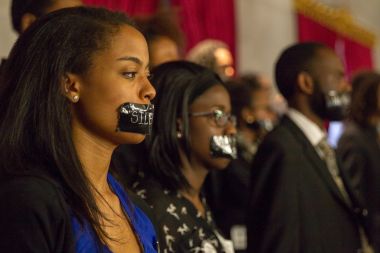 Members of the Nashville Student Organizing Committee stage a March 2014 silent protest in the gallery of the House chamber in Nashville, Tenn. The group opposes a state law that prevents student IDs to be used to vote in Tennessee.

On Tuesday, a federal judge in Wisconsin struck a blow in one of America’s most contentious legal battles. Finding that Wisconsin’s new law requiring that citizens show government-issued photo IDs in order to vote was discriminatory and violated the Constitution, Judge Lynn Adelman set off a skirmish that is likely to be fought across nine states that have passed stricter voting rules since the beginning of 2013.

Most of these new rules created tougher ID requirements for casting a ballot, a stricter process for voter registration, or restricted the time period for voting and methods of absentee balloting.

“The disproportionate impact of the photo ID requirement [on racial minorities] results from the interaction of the requirement with the effects of past or present discrimination,” Judge Adelman wrote in her decision on Wisconsin.

The controversy over America’s restrictive voting laws — which supporters describe as necessary to prevent fraud and ensure uniformity among different regions — raised a question that is global in scope. We at ICIJ wanted to know: how restrictive are voting requirements in nations around the world?

China, Russia outrank U.S. when it comes to corporate transparency