In Ghana the relationship between fishermen and the new oil industry is complex. In this video, Edlove Quarshie, a Sekondi-based fisherman and the Assistant Secretary of the Link Hook Canoe Fishermen Association, talks about the difficulties he and his colleagues face now that they are “competing” with the oil industry.

Fishermen in the Western Region of Ghana are nervous about the country’s new offshore oil industry. They fear the potentially devastating impact an oil spill could have on their livelihoods and communities. In this video, Nana Kojo Kondua talks about the role of fishing in his village, Abuesi, and the urgent need for government action to protect fishing communities. 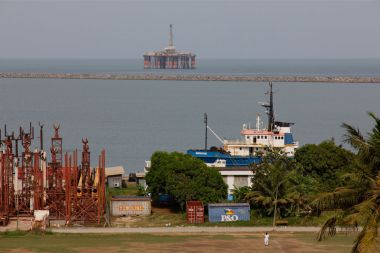 The fishing and oil industries are intertwined in a complex relationship around the world. Oil is a blessing for national treasuries, and a curse when offshore drilling and spills damage fisheries and fishing communities.

The oil industry offers jobs to fishermen. Oil revenues and royalties bolster the economies of fishing communities. Even at the height of the Deepwater Horizon disaster, many residents along the Gulf of Mexico stood by the oil industry.

In December 2010, Ghana, a nation of 24 million people, became the latest African nation to join the petroleum club. Its Jubilee field, approximately 60 km. (40 miles) off Ghana’s coast, is the first of what will likely be several deep-water oil development projects. Drilling off Ghana over the next 20 years may be worth as much as $20 billion in export revenue, but the government has pledged it will succeed where many developing countries have failed and beat the so-called “resource curse.”

In Nigeria, for example, oil development in the Niger Delta has gone on for over 50 years with negligible participation of local fishing communities and disastrous impacts on the Delta ecosystem.

Ishac Diwan, the World Bank country director for Ghana, believes the country can manage and benefit from its oil. The International Finance Corporation, the private financing arm of the World Bank Group, provided funds for Jubilee field partners. Opening the Jubilee wells required an investment of about $3.4 billion. U.S. firms Kosmos Energy and Anadarko Petroleum are part of an operating consortium headed by U.K.-based Tullow Oil PLC.

“Keep in mind that Ghana knows nothing about oil,” Diwan said. “This is new, so they’re catching up. There are various agencies in the government that need to step up and learn how to deal with oil. One is the environmental agency.”

At its current pace of around 120,000 barrels a day, oil production will account for about 5 percent of Ghanaian GDP in the next few years. That figure is likely to increase as drilling develops and higher oil prices bring in more revenues.

Ghana’s GDP was $31 billion in 2010. By comparison, Nigeria’s more mature oil industry, which fills about 2 million barrels a day, now accounts for 40 percent of the nation’s economic output.

Fishing generates none of the excitement or fantasies of oil, yet the industry also accounts for nearly 5 percent of Ghana’s GDP.

Jobs in the offshore oil industry for Ghanaians are unlikely to number more than 400. At a Trades Union Congress workshop held in Accra on February 25, 2011, Mohameed Amin Adam, from the Civil Society Platform on Oil and Gas, said 400 jobs was the latest government estimate. That’s about half the jobs that should be generated by the Jubilee field by 2020.

On the coast of Ghana, community activists complained to ICIJ that while fishermen have had to accommodate the oil industry, there is no law obliging the industry to do anything for fishermen. They fear a repeat of past disasters: Scientists estimate that it may take another decade to assess the full impact of the Deepwater Horizon spill on the Gulf of Mexico ecosystem.

The Deepwater Horizon spill was a disaster for businesses. In the U.S., however, there was compensation available — as of April, 300,000 claims had been settled for $3.8 billion. Another 557,000 claims were pending. If there is a major oil spill off the coast of Ghana, or elsewhere in the Gulf of Guinea region, fishermen, buyers, fish smoking and reselling operations — a significant segment of the local population — will most likely be left to fend for themselves.

Kyei Kwadwo Yamoah, program coordinator at Friends of the Nation, an organization that works with fishing communities, said it’s an “unfortunate truth” that right now there is no compensation fund for fishermen in the event of a spill. George Diawuoh, the oil and gas point man for Ghana’s Environmental Protection Agency, said the agency is working to “cost the activity of fishermen,” in order to have numbers in place for possible compensation. Diawuoh says Ghana’s oil spill plan designates “the operator” — the Tullow consortium and the federal government — as responsible for all compensation.

But what guarantees that “the operator” could cover costs associated with a major spill? Critics said the Jubilee field partners are not major oil companies — a significant spill could wipe out their cash reserves.

The Civil Society Platform on Oil and Gas – a forum for environmentalists, industry and academics partially funded by the World Bank– gave Ghana a “C” grade in its “Readiness Report Card.” The report examined everything from licensing and contracts to public financial management of the oil sector. But the group gave the government a “D” for its handling of social and environmental issues.

According to fishing-community workers and residents, the new oil industry is already affecting Ghanaian fishing.

“Even lives are being lost,” said Edlove Quarshie, a fisherman and representative of the Line Hook Canoe Fishermen Association, describing run-ins between the fishing and the oil industries since 2007. Quarshie recounted a deadly incident in July 2007: an oil industry supply ship ran over a fishing canoe one night at sea. Four fishermen were killed on the spot; two died later from injuries.

Fishermen are angry about the 500-meter no-fishing zone around the Jubilee field. They claim powerful, 24-7 lighting on the Kwame Nkrumah, the refitted tanker that serves as the oil storage and off-loading vessel, compels fish to venture into the no-go zone. Boats and motors have already been seized. Fishermen talk of increased tanker and shipping traffic and the risks of collision, more ballast water dumped into the sea and more noise to scare away fish.

Pollution from the oil operation is another concern. Tarballs washed ashore in January along the coast near the town of Axim. Fishermen said they had never seen tarballs before and thought they were related to the new drilling. Government officials told Ghanaian reporters that experts would test the tarballs to identify their origin. The results have not yet been made public.

George Diawuoh said Ghana’s EPA is working with the Navy and the Air Force, “because we need a lot of collaboration with other government institutions in order to be able to face these challenges.”

Christiane Badgley is a journalist and documentary producer who has been following oil development in Africa. This article was produced in cooperation with the Pulitzer Center on Crisis Reporting. To learn more about this ongoing work, see Pipeline Dreams and see her related Ghana oil reports.