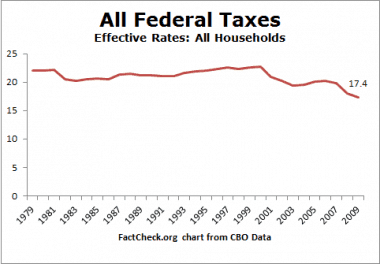 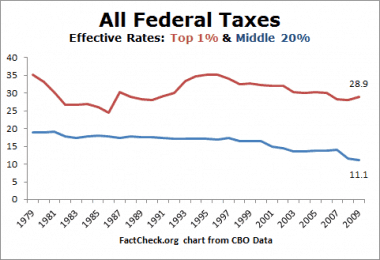 Politicians talk about the burden of taxes incessantly. Now comes a rare chance to check the facts. And the fact is that federal tax rates had fallen to the lowest in 30 years when President Barack Obama took office — and fell again in his first year in office.

This news comes from the nonpartisan Congressional Budget Office, which just issued the latest update of its invaluable series on “Distribution of Household Income and Federal Taxes,” this time covering 2008 and 2009. The CBO’s statistical series now covers the 30 years since 1979.

The average rate paid by all households for all federal taxes combined — including income taxes, payroll taxes, excise taxes (on such things as gasoline, tobacco and alcoholic beverages) and individuals’ share of corporate income taxes — hit its highest rate during the period in 2000, just before President George W. Bush began signing the tax cuts that are scheduled to expire next year (unless Congress extends them again).

The all-household rate was 22.7 percent the year before Bush took office, then declined to 19.9 percent in 2007 (lower than in any year before he took office) and plunged again to 18 percent in the recession year of 2008. That was the lowest until the following year, Obama’s first, when it dropped again to 17.4 percent.

Much of the decline in 2008 and 2009 was due to the collapsing economy. The worst recession since the Great Depression of the 1930s began in December 2007. There were fewer corporate profits to tax, for one thing. And upper-level households, which pay the highest rates, also saw their incomes plunge along with the stock market and tumbling real-estate prices.

But some of the decline was also due to the tax cuts contained in Obama’s 2009 stimulus package, including a tax credit that benefited nearly all workers. Despite Republican criticisms, and Obama’s own campaign promise to raise taxes on upper-income households, the new president was a tax cutter in 2009.

The CBO figures show rates have declined substantially for all income levels. In fact, the only group for which rates did not reach a 30-year low in 2009 was households in the top 1 percent of all earners.

Even those affluent households paid an average total federal tax rate of just 28.9 percent in 2009. That was up a little from the previous year but still down sharply from the peak of 35.3 percent for this 30-year period. That was reached in 1995, under President Bill Clinton.

As we’ve noted before, the nation’s current string of trillion-dollar deficits results from historically high spending and historically low revenues. We noted in our June 4 article that President Obama’s spending levels are near the highest level since World War II, measured as a percentage of the nation’s gross domestic product. And we also noted that tax receipts were the lowest since 1950, as a percentage of GDP.

There’s much more in the CBO’s new figures, and we may have more to say about them in the future. And we offer no opinion on whether taxes are too high or too low, or just right. That’s a matter of intense national debate.

But Congress must act soon on taxes, or allow a large increase to take effect automatically. And the CBO’s new figures offer further confirmation that as things stand, Washington is taking a smaller slice of the average American’s earnings — at just about every level — than at any time in decades.