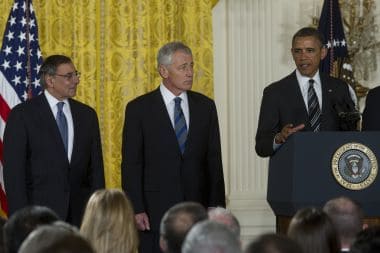 American Future Fund launched its “Hagel No” campaign Jan. 16, claiming the effort signals “a major battle over the controversial nomination.” The group is one of several trying to block President Barack Obama’s pick for defense secretary in an unusual media blitz against a presidential cabinet appointment.

AFF says it plans to spend $500,000 to air the ad on CNN and Fox in an attempt to discredit Hagel, a former two-term Republican senator from Nebraska. His confirmation hearing is scheduled for Jan. 31 before the Senate Armed Services Committee.

AFF, which has its roots in Iowa and the Republican Party, spent more than $20 million during the last election cycle, supporting Republicans and trying to defeat Democrats, including Obama.

The ad goes too far when it claims Hagel “sits on the board of a private equity firm with investments in Iran.”

The ad cites a Jan. 14 USA Today article that makes no mention of a private equity firm with investments in Iran. It only cites Hagel’s connection to Deutsche Bank. The ad also refers to a website, United Against Nuclear Iran, which links to an August New York Times article that broke the news — using unnamed sources — that the U.S. is investigating Deutsche Bank for allegedly violating U.S. sanctions against Iran. The article does not mention Hagel.

The fact is there’s no evidence that Hagel had anything to do with Deutsche Bank’s past dealings in Iran. And the bank’s current involvement in Iran is minimal, honoring previous contractual agreements and accepting no new business, according to the company’s latest annual report.

In its 2011 annual report, Deutsche Bank acknowledged having “engaged in a limited amount of business” with Iran. But the bank said it closed its Tehran office in December 2007. The report said the bank’s remaining business there fulfills previous contractual obligations involving European and Asian exporters. The report said Iranian investments represented less than 0.1 percent of the bank’s total assets at the end of 2011.

Hagel joined the bank’s Americas Advisory Board in May 2009 after the bank said it closed its Tehran office and after it made a decision not to engage in new business in Iran. Unnamed U.S. law enforcement sources told the Times that Deutsche Bank stopped violating U.S. sanctions against Iran in 2008, the year before Hagel joined the board.

AFF did not return our phone calls and an email seeking information to substantiate its claim.

Since the 1990s, U.S. sanctions have explicitly prohibited Americans from virtually all investment and trade with Iran because of its support of terrorism and its pursuit of weapons of mass destruction. The unnamed U.S. law enforcement sources told the Times that Deutsche Bank violated those sanctions by using its American branches to transfer money on behalf of Iranian clients.

Deutsche Bank declined to comment to the Times for its article. But its annual report stated that its activities in Iran — and other countries the U.S. designated as state sponsors of terrorism — have not involved U.S. citizens, which the sanctions prohibit.

Deutsche Bank, 2011 annual report: We are a German bank and our activities with respect to such countries have not involved any U.S. person in either a managerial or operational role and have been subject to policies and procedures designed to ensure compliance with United Nations, European Union and German embargoes.

The unnamed U.S. law enforcement sources said they did not suspect the bank violated sanctions beyond 2008.

New York Times, Aug. 17, 2012: The investigation into Deutsche Bank is still in its very early stages, according to the law enforcement officials. So far, there is no suspicion that the bank moved money on behalf of Iranian clients through its American operations after 2008, the officials said.

The ad fails to tell the whole story when it claims that “Hagel declined to publicly disclose millions in underlying assets” while he served in the Senate.

It’s true that Hagel did not report the assets of a private equity firm he used to run — but he wasn’t required to report them. And although the Senate Ethics Committee had questioned his office about one of his financial disclosure forms, the committee never accused him of any wrongdoing. In fact, the committee changed its disclosure rules in a way that allowed the senator to continue to leave out the firm’s underlying assets on his annual disclosure forms.

The ad cites a 2003 article in The Hill newspaper that questioned whether Hagel correctly followed financial disclosure laws. The article also reported that an ethics committee director had requested Hagel’s office to provide “additional, clarifying information” to accompany a 1997 financial disclosure report.

At issue was Hagel’s decision not to disclose the underlying assets of his former private equity firm, the McCarthy Group, in which he had a stake of $1 million to $5 million.

Among the group’s assets Hagel did not disclose was a subsidiary company, Election Systems & Software (ES&S), which at the time supplied nearly half of the country’s voting machines, including those used in Nebraska. Hagel had been chairman of that company and president of McCarthy in the years before he became a senator.

Hagel did not list McCarthy’s underlying assets because he claimed the firm was an “excepted investment fund.” Under the law, funds are exempt from further disclosure if they are widely held, publicly traded or “publicly available.”

The Hill article cast doubt on the public availability of the McCarthy Group’s underlying assets after the newspaper searched through financial databases for the assets and failed to find them. Michael McCarthy, the firm’s chairman, acknowledged to The Hill that the company was not publicly traded or widely diversified (under the committee’s definition). But McCarthy claimed information about the company’s assets was publicly available “by private exchange or private treaty.”

Ultimately it didn’t matter. After The Hill began its inquiry, the ethics committee, which had just changed directors, loosened its definition of a publicly available fund.

The Hill, Jan. 29, 2003: The committee abandoned the more stringent definition of the term, which under the panel’s rules, Hagel apparently failed to meet…

[T]he committee will decide, based on the specific facts of each case, whether an investment has been made in a publicly available firm, a circumstance that would allow it to be listed as an ‘excepted investment fund.’ But the panel will neither discuss any individual case nor offer any concrete standard under which a case may be judged…

The newly weakened definition makes it virtually impossible to determine whether Hagel — or any other lawmaker — must report investments in non-traded private companies.

We were unable to find any official public documents of Hagel’s reported dealings with the Senate Ethics Committee. But in 2004, Wired News reported that Hagel’s chief of staff, Lou Ann Linehan, faxed the magazine a letter Hagel’s office received from the Senate Ethics Committee. The magazine said the ethics committee “concluded that Hagel did not violate its rules.”

FACT CHECK: Conservative response to the State of the Union

FACT CHECK: State of the Union